With U S. stocks hitting new highs this past week, the S&P 500 has now fully recovered from the bottom it hit on Christmas Eve of last year.

What’s more, the S&P 500’s turnaround from the worst May in seven years was remarkably quick. The S&P 500 went from a 50-day low to a multiyear high in 12 trading days. The pace of that bounce fell just short of breaking a record that goes back to 1928.

In what Bloomberg called “the everything rally,” a wide array of stock and bond indexes have each hit all-time highs at the same time. 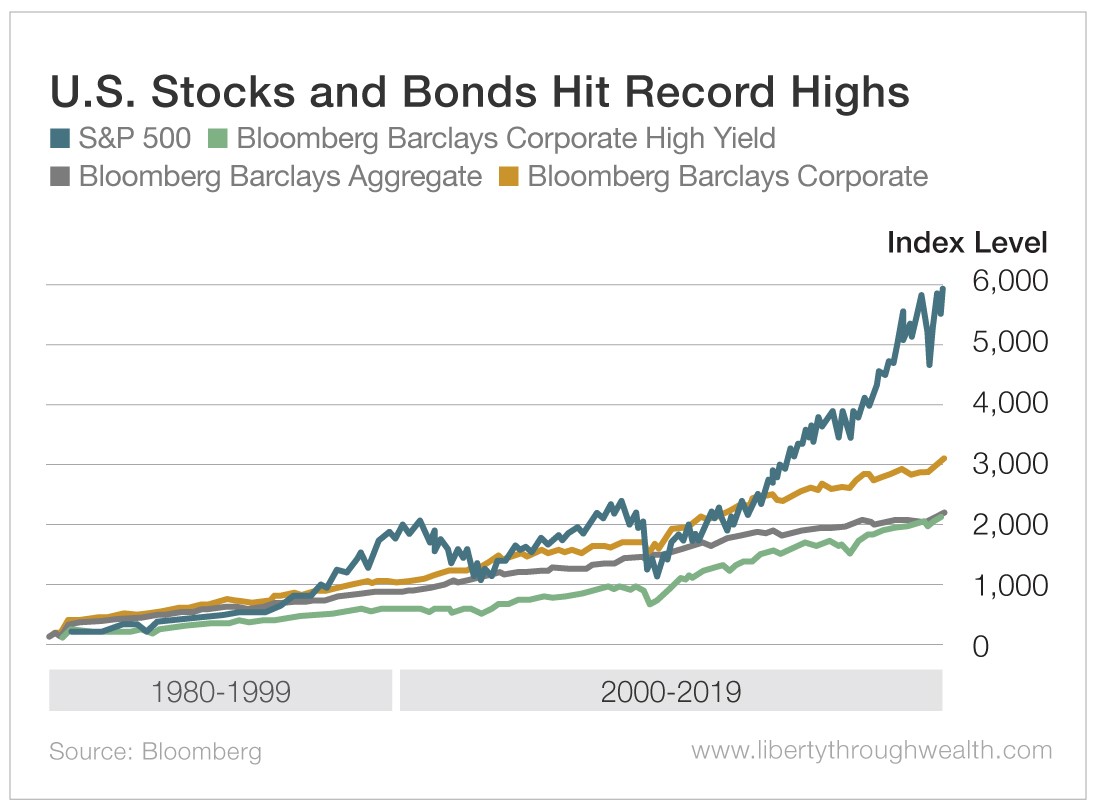 This kind of price action also turns out to be immensely bullish over the medium term, according to research by SentimenTrader.

Yet there is little sign of this bullish sentiment in the mainstream financial media or on Wall Street.

Start with Bank of America Merrill Lynch’s regular survey of fund managers. Collectively, global fund managers are more bearish today than they’ve been at any point since the financial crisis.

Global growth expectations have dropped by the largest amount since the November 1994 survey during the Tequila Crisis. Some indicators even suggest Wall Street may have more money allocated to bonds than stocks.

The list includes the threat of imminent recession, a worsening trade war between the U.S. and China, and unprecedented levels of corporate debt. And these are capped by the threat of “monetary policy impotence” – the belief that central bankers can’t do much more to stimulate debt-ridden economies.

Here’s where a historical perspective – so rare on Wall Street – is particularly useful.

According to the financial media, the world is always on the brink of economic collapse.

In August 2011, the downgrade of U.S. sovereign debt from AAA status by S&P’s rating agency all but tipped the U.S. stock market into a 20% correction.

In May 2015, markets feared the global financial Armageddon that would be unleashed by Greece leaving the eurozone.

In November 2016, the election of President Trump generated apoplectic predictions from the likes of Paul Krugman that the U.S. stock market would enter a tailspin and that the world was “looking at a global recession, with no end in sight.”

And yet the U.S., stocks and, it seems, “everything else” have continued to climb the perennial “wall of worry” (the fact that investors always find reason to worry even in financially sound circumstances).

So why do so many financial experts get it so wrong? I believe they all share the same massive blind spot.

Yet every single one of these approaches ignores the “elephant in the room” – that is, the irrational factor that really drives the market.

And that elephant is called “market sentiment.”

Market sentiment has long been the red-headed stepchild of market analysis.

Nobel Prize-winning modern financial theory refuses even to acknowledge its existence – blithely assuming that all investors are perfectly rational.

Yet anyone who has studied financial history knows that – at least over the short term – markets are driven by little else.

And what does market sentiment tell us about the U.S. stock market today?

Investors of all stripes agree that U.S. stock market valuations are high. The good news is investors are nervous about it. And bull markets, as global investor Sir John Templeton pointed out, “die on euphoria.”

So unlike emerging markets in 1997 or the dot-com bubble in 1999 or the real estate boom in 2007… When I look at the U.S. stock market today, I see no signs of euphoria, no siren calls of “this time it’s different.”

Here’s my prediction: Yes, the current “everything rally” will end one day. But it will do so precisely at the moment Wall Street least expects it to.

Don’t Buy the China Dip… Now or Ever