The latest news about the Chinese economy is in. And it’s not good.

The trade war with the U.S. is hitting home. China’s exports fell 3.2% year over year in September alone. Add declining income growth, a distressed banking system and slowing industrial expansion… And it’s no wonder the government is pulling out all the stops to kick-start growth.

China’s central bank has devalued the yuan to support exports. It added tens of billions to the banking system. Authorities have instructed banks to provide credit to Chinese firms – both good and bad – to keep the economy going.

I believe that the current slowdown in the Chinese economy is more than a short-term blip. It’s a watershed moment that marks the beginning of the end for the China miracle.

And for investors, it means just one thing: Stay away from China.

How the China Story Will Unfold

First, there is the “China is the future” narrative.

This view breathlessly embraces all things Chinese. Shenzhen is the new Silicon Valley. Shanghai is the next New York. Beijing’s Tsinghua University is the next Harvard.

Second, some say “China is the next Japan.” Soaring debts, an aging population and decades of malinvestment will ensure that China’s GDP growth not only slows but stagnates.

Third, some predict that “China will collapse.” They expect China will share the fate of the Soviet Union.

I’ve compared the Chinese economy to the bus in Speed, a movie about a bus that goes out of control on LA freeways. The bus has a bomb strapped to it. If the bus slows below 50 miles per hour, it will blow up. It remains an apt metaphor for the Chinese economy.

Nor is the comparison to the Soviet Union lost on the Chinese leadership.

As professor and China observer Christopher Balding points out, Chinese President Xi Jinping is acutely aware that China is on its 13th five-year economic plan. The Soviet Union never saw 14. As a believer in numerology, Xi is keen not to repeat the Soviet Union’s errors.

Pundits can debate the validity of each of these scenarios. But let’s not overlook how wrong they have gotten China in the past.

In the year 2000, the West welcomed China with open arms into the World Trade Organization. It naively expected that this signaled the first step in China’s transformation into a Jeffersonian democracy.

Instead, China never played by the rules. It constructed a separate internet. Its banks were pawns of a centrally planned and directed economy. Its systematic rip-off of Western intellectual property reached epic proportions.

With that caveat, here is my prediction…

Look for China to start to redefine its narrative, shifting focus away from high rates of GDP. Expect China to embrace a slower, healthier and more sustainable rate of economic growth.

Alas, China has no choice. Before the global financial crisis, China was growing at 10% per year. That has dropped down to 8%, 7% and now 6%.

How low can Chinese growth tumble?

Leland Miller of China Beige Book, an independent data source on the Chinese economy, predicts that China’s annual GDP growth may shrink to 1% to 2% in the coming decade.

The View of a China Bull

China permabull Jim Rogers takes China’s challenges in historical stride. Rogers points out that the U.S. has suffered 15 depressions, two world wars, and even civil war over its short history.

Despite these headwinds, the U.S. became the most powerful economy in the world.

Rogers believes that China’s going to have its difficulties. “But I’m teaching my children Chinese. I’m not teaching them in Danish.”

As a student of history, I appreciate Rogers’ long-term perspective. But I think Rogers has history wrong. Countries don’t always overcome depressions and world wars…

Russia never overcame the consequences of the Great October Socialist Revolution of 1917.

Austria-Hungary – one of the world’s economic powerhouses before World War I – was dissolved in 1918.

Argentina – once wealthier than France or the U.K. – has been an economic basket case for close to a century.

Here’s what I do know for sure: If you have invested in China’s equivalent of the S&P 500 over the past decade, you have not made any money. 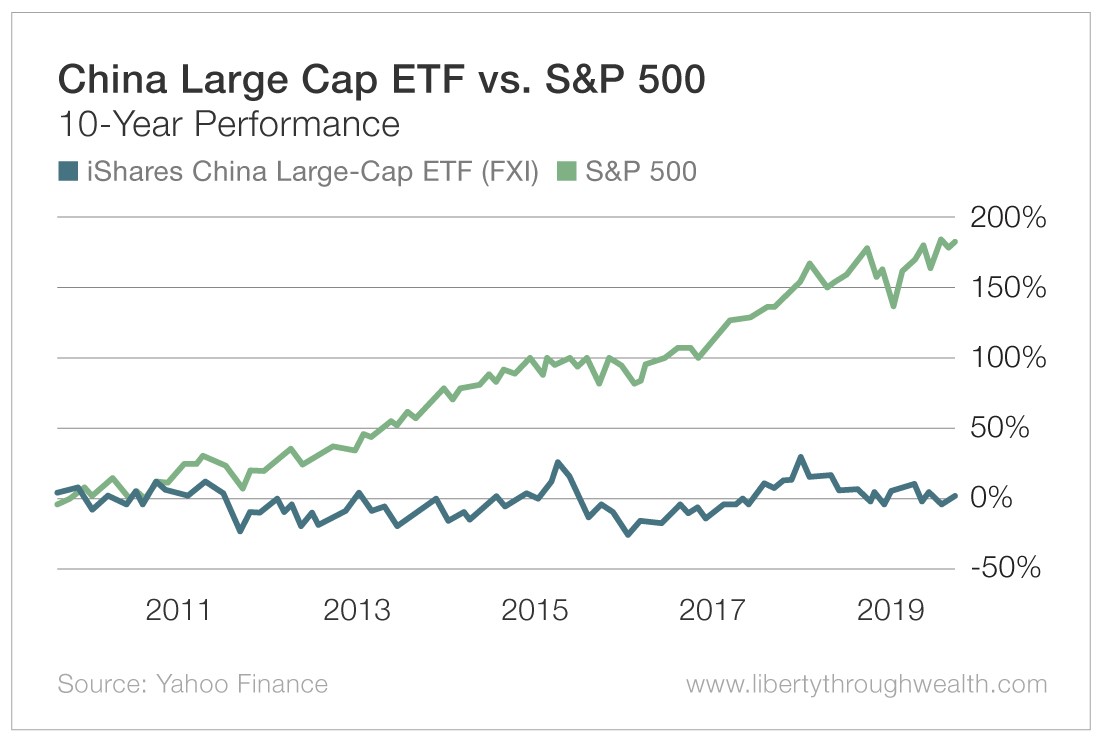 My advice? Don’t invest in China.

The New Wealth Tax Is Calling… It’s for You