On Wednesday, I discussed how the world’s greatest investor – Jim Simons and his quant shop Renaissance Technologies – owes his remarkable investment success to short-term swing trading.

Renaissance has crushed the returns of other investment approaches by relying on swing trades driven by computerized algorithms.

You may have never heard of Simons. But are you a fan of the late, great Jack Bogle, the founder of Vanguard and index investing?

Do you admire Warren Buffett? The same $1 invested in Berkshire Hathaway would have grown to $107.

But, had you been lucky enough to invest with Simon’s Medallion Fund, your $1 would be worth about $27,000 now.

What’s the most important conclusion for you as an investor?

A quantitatively driven approach to short-term swing trading is by far the way to make the most money over the shortest period.

The “Inhuman” Success of Quantitative Trading

A recent headline on CNBC highlighted Renaissance’s greatest edge: “The secret behind the greatest modern-day moneymaker on Wall Street: Remove all emotion.”

Quantitative investing algorithms are superior to human investors in every way.

They can pick up on predictable patterns no human could. And they use these patterns to collect massive profits over very short periods.

As The Wall Street Journal‘s Gregory Zuckerman, author of a book on Renaissance Technologies, put it, “Too often we get caught up in stories when it comes to stocks… By deferring to models and the scientific method, you don’t fall for things like behavioral biases.”

In short, a quantitative approach solves the problem of cognitive biases that typically cloud an investor’s judgment.

The Secrets of Successful Swing Trading

Swing trading turns out to be a massive piece of the successful short-term trading puzzle.

Yet the principle behind swing trading is surprisingly simple.

Like the ebb and flow of water washing up against an ocean shore, stocks move in waves.

In the past, human traders like Paul Tudor Jones II relied on their finely honed instincts to trade these movements.

Getting in tune with a stock’s rhythm was the key to successful swing trading.

But today, quant traders take swing trading to another level. They do so by translating these ebbs and flows into computer algorithms.

These algorithms then home in on the few potential swing trades with the highest probability of success.

Instead of following a trader’s instincts, swing trading became all about playing the odds.

Oxford Swing Trader is my new VIP Trading Service that uses swing trading algorithms similar to those used by some of the world’s top hedge funds.

Today, I want to delve into how I research and place a trade.

The one below offers a terrific overview of swing trade candidate Chipotle (NYSE: CMG) – a well-known blue chip stock. 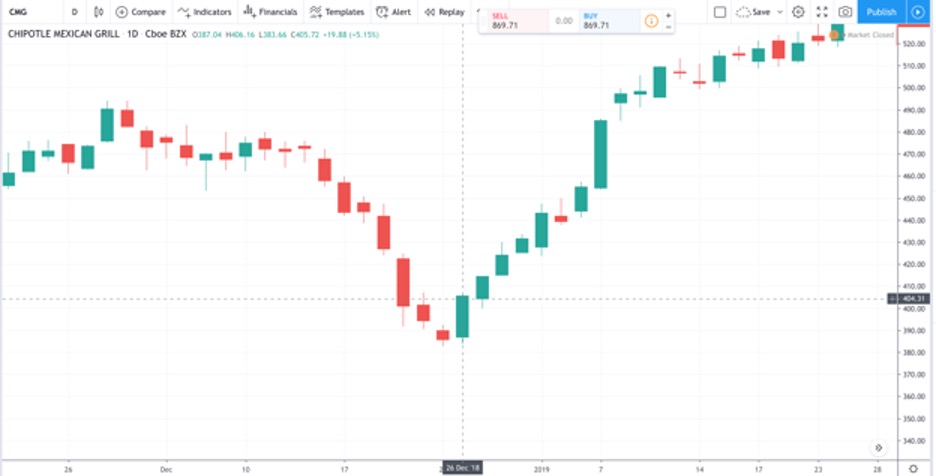 Having to page through 4,000-plus stock charts to find a chart like this would take me several hours each day.

Luckily, there is an easier way…

Quant investing allows me to translate this technical pattern into a computer algorithm.

Running the algorithm on my specially dedicated computer allows me to identify swing trading candidates in 10 minutes instead of 10 hours.

The algorithm also confirms that the patterns I look for are real. With charts, traders often see patterns that aren’t there.

As the psychologist Carl Jung observed, “All perception is projection.”

Each day after the market close, I download the closing prices of 4,000-plus stocks.

I then run them through an algorithm that identifies those stocks that fit a specific set of swing trading patterns.

The first proprietary algorithm is the bread and butter of a swing trader’s arsenal: the “five days down” pattern.

As the name implies, a stock forms this pattern when it has been driven down for five (or more) days, each close lower than the last.

When a stock does that, statistically speaking, it’s primed for a reversal.

After that initial screen, I run the remaining stocks through another half a dozen proprietary algorithms.

One algorithm identifies a trading channel.

Another algorithm targets an overreaction pattern.

Still another tracks a “washout” pattern – when a stock moves sharply by at least one standard deviation.

The combination of these algorithms narrows the candidates down to the stocks most primed to bounce.

The ideal stock will trigger on all or most of these algorithms.

I will also recommend a stop price, a price target and, whenever possible, an options recommendation to turbocharge your returns.

The final decision will always be based solely on the numbers.

How to Make Your Fortune in the Biotech...

The World’s Most Successful Investor Is a Swing...