First Impressions Could Cost You

Note From Managing Editor Allison Brickell: I’ve been with The Oxford Club for more than five years now. So it’s hard for me to imagine a time when Chief Income Strategist Marc Lichtenfeld wasn’t a key member of our Oxford Club team (and a friendly face around our Baltimore office). But today we’re taking a look back in time… to when Alexander Green wrote about his first impression of Marc.

You see, Marc has a unique talent for tracking biotech catalysts and playing them at the exact right time to return MAJOR profits. And his latest research has blown us away. Continue reading to see what Alex really thought about Marc all those years ago, and take a look at Marc’s latest presentation right here.

Marc believes that you can double your money 12 times over the next 12 months if you use this one catalyst correctly. Click here to watch his presentation.

In September 2007, I was at an Oxford Club conference in Lake Louise, Alberta.

The Club was just beginning to grow. I wanted to preserve its quality and reputation.

So before I formally met him, I snuck into the back of his first presentation to Members. I figured I’d get an early first impression of the guy before happy hour.

He was presenting on one of my favorite topics: biotech.

At the time, his first Oxford Club recommendation, BioMarin Pharmaceutical (Nasdaq: BMRN), was up around 35%. (A few months later, he closed out the position for a gain of more than 100%.)

While Marc and I may not see eye to eye on some things – I’d rather be on the golf course, while he’d rather be at the poker table – we agree on the things that really matter…

We believe in the importance of investing for the long term, diversifying your portfolio, and using trailing stops to limit your downside and lock in your gains.

We also agree that we live in an incredible country.

We can’t even imagine all the fantastic innovations that lie ahead of us – especially in terms of healthcare.

It’s easy to overlook the triumph of science over disease in the past 100 years.

During this period, polio, smallpox, typhoid, tetanus, whooping cough, measles and diphtheria have all been controlled or eradicated. These victories helped double the human life span in the 20th century.

In recent years, medical research has made significant inroads in the treatment of the nation’s two biggest killers: heart disease and cancer.

The National Cancer Institute reports that the risk of dying from cancer declined 22% between 1991 and 2011. Heart disease and stroke deaths have also fallen dramatically.

Our longer, healthier lives have also created an economic benefit. In inflation-adjusted terms, Americans’ per capita output is eight times what it was in the 19th century. Much of this is directly linked to progress against disease.

Yet hundreds of diseases still cry out for effective cures or treatment.

I’ve been arguing for years that the best way to play American innovation is with a careful selection of small cap and midcap biotechs.

I learned early on that Marc has a knack for identifying such companies. (In 2007, BioMarin’s market cap was around $2.5 billion. Today, it’s $22 billion.)

During the summit, they discussed the investing and economic opportunities within the gene therapy subsector of biotech.

Since then, gene therapy companies (as measured by a JPMorgan Genetic Therapies fund) have produced a total return of 37.48%. Meanwhile, the S&P 500 has returned a paltry 4.41% over the same period. 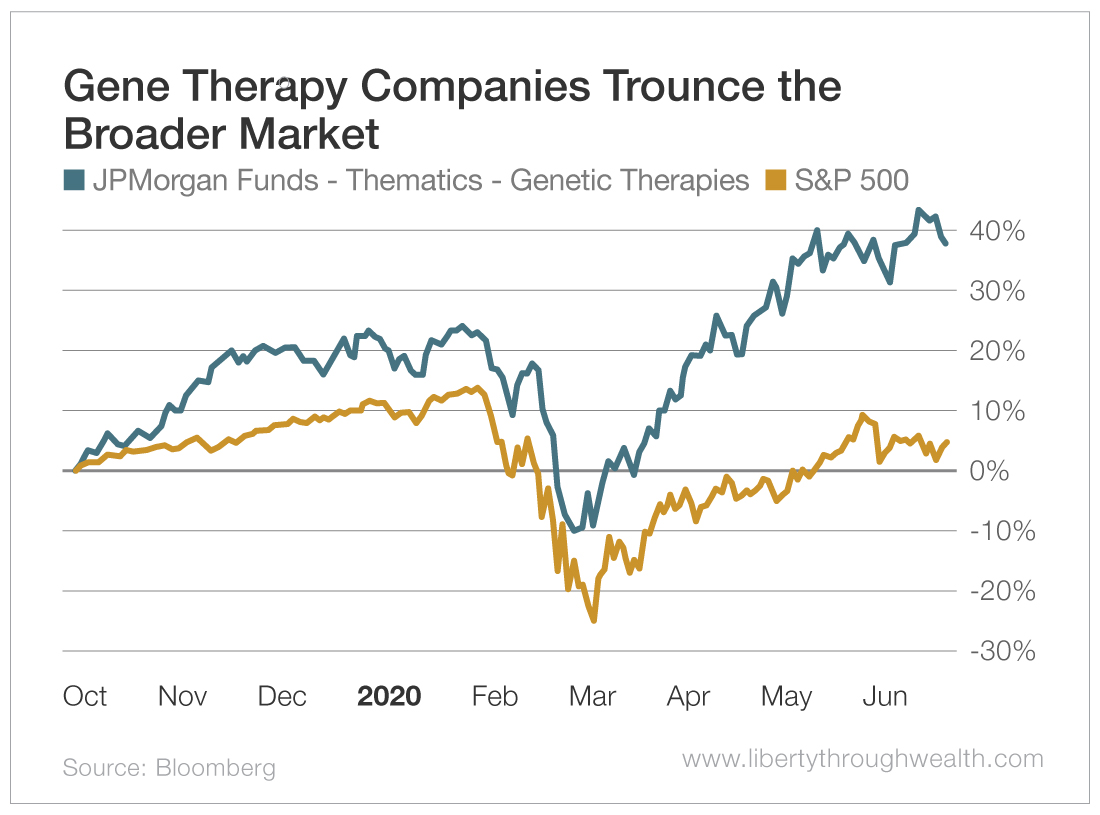 Now Marc is researching a catalyst that Wall Street has been using for nearly three decades to successfully play the biotech sector.

And it has nothing to do with clinical trials or earnings reports.

Using this catalyst, Marc believes investors can double their money 12 times over 12 months.

Based on his track record, I know I’ll be watching his latest presentation closely.

How to Build a “Barbell” Portfolio