The trend is your friend. Every investor has heard it.

To maximize returns in the stock market, you must be on the right side of unfolding developments.

Reported cases of COVID-19 are rising, here and abroad. Millions of businesses are either shut down or running at reduced capacity. And the world is on track for the biggest annual economic contraction since the Great Depression.

These trends are negative.

On the other hand, energy is cheap. Inflation and interest rates are low. We have unprecedented monetary and fiscal stimulus. And third quarter GDP growth – when announced by the Bureau of Economic Analysis next week – will almost certainly show the biggest quarterly increase in economic activity in U.S. history.

Those trends are positive. So what’s an investor to do?

Start by understanding that some trends – like the ones just mentioned – are short term. They can and will change quickly and without notice.

But other trends are decades or centuries long. They may change, but far less often.

For investors, these long-term trends are both the most rewarding and the safest to follow.

Best of all, they are almost entirely positive. Yet the vast majority of investors don’t recognize them.

Fortunately, I have the antidote.

It’s a new book by my friend Ron Bailey – author of The End of Doom and Reason magazine’s science correspondent – and Marian L. Tupy, a senior fellow at the Cato Institute’s Center for Global Liberty and Prosperity.

It’s called Ten Global Trends Every Smart Person Should Know. And it is a tour de force.

Bailey and Tupy’s premise is one I’ve stated here many times before, that the world is getting objectively better in most ways for most people in most places.

The authors point out in the book, for example, that over the last 200 years, the world population grew eightfold. But the world economy grew more than a hundredfold.

The vast majority of our ancestors lived short lives in disease-ridden poverty and pervasive ignorance.

But over the last 100 years, global poverty plummeted, as did global illiteracy. Standards of living – as well as household net worth – have never been higher.

In his 1968 book, The Population Bomb, Paul Ehrlich predicted that “in the 1970s and 1980s hundreds of millions of people will starve to death in spite of any crash programs embarked upon now.”

It didn’t happen. In fact, the world population has more than doubled over the last half-century, yet today we grow more food than ever on far less land.

Since 1900, average life expectancy has more than doubled, reaching more than 72 years globally and 79 years in the U.S.

Between 1980 and 2017, the inflation-adjusted global hourly income per person grew by 80%.

The media harps on growing authoritarian trends in places like Brazil, Hungary, Poland and even the U.S. But there are more people living in democratic or partially democratic countries than ever before.

Over the last half-century, wars between countries have become rarer, and those that do occur kill fewer people.

Even the chance of a person dying in a natural catastrophe – earthquake, flood, storm, wildfire or landslide – has declined by nearly 99% since the 1920s and 1930s.

The book further explains why educational attainment and even IQs are increasing, human violence is declining, air and water quality are improving, and self-reported global happiness is on the rise.

Despite this undeniable progress, 58% of people in 17 countries who were surveyed in 2016 – well before the pandemic – thought the world was either getting worse or staying the same.

Question: If the world is getting steadily worse, why would you risk your hard-earned money in the stock market?

Ten Global Trends Every Smart Person Should Know is full of quick-to-read, easily understandable and surprising facts about how the world is truly faring.

You won’t get this knowledge from the mainstream media. It isn’t taught at high schools and universities. And most of your friends and colleagues aren’t aware of it either.

Yet Bailey and Tupy cite objective data from official and scientific sources – and provide dozens of beautiful charts and graphs to illustrate how progress is occurring around the world.

(The book is so attractive you’ll want to display it on your coffee table and give copies to friends and family as gifts.)

The authors do not take a Panglossian view of the world, incidentally.

Not everything is getting better. Global carbon emissions are rising. Wildlife biodiversity is decreasing. And sovereign debt – both here and abroad – is getting worse, to name just a few examples.

The World Bank estimates that about 100 million people have fallen back into extreme poverty this year.

And the recovery has been the most unequal in history.

There are now more jobs for the top quarter of earners than before COVID-19. For the bottom quarter, jobs have fallen by more than 20%.

The good news? The positive megatrends mentioned above are supported by factors – democracy, capitalism, science and reason – that are not going away.

Moreover, progress is cumulative – we don’t forget past innovations and start over – while setbacks are temporary.

The smart bet for investors has always been that we will experience continued progress and growing prosperity punctuated by occasional, unexpected setbacks.

If you recognized these powerful trends – that they do exist and why – you would have been far more likely to buy during the first quarter market meltdown.

And far less likely to sell in a panic. And the same holds true for the next crisis.

Read Ten Global Trends Every Smart Person Should Know and you won’t just become a more successful investor. You’ll be a better-informed citizen.

As I try to make clear to readers…

If you want to be a more successful investor, follow the trend lines not the headlines.

And to better understand which trend lines, read this book. 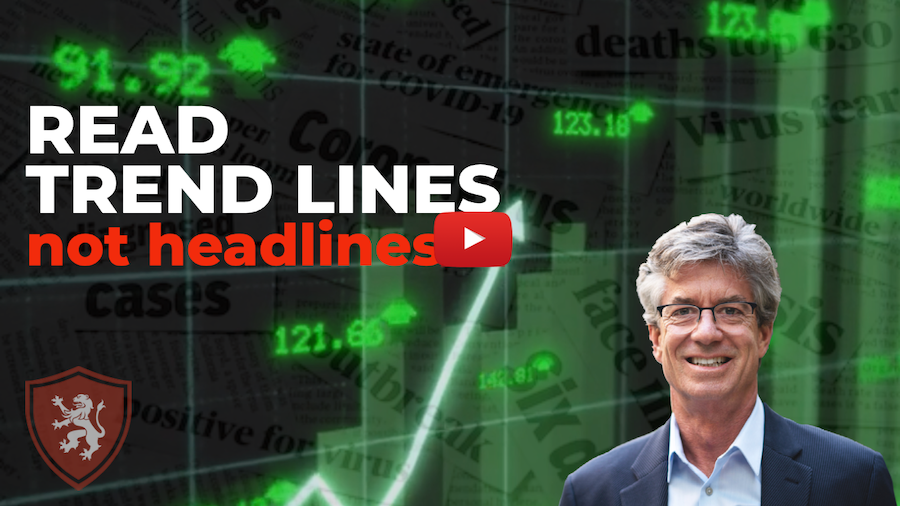