“In emerging markets investments, it is necessary to be optimistic since the world belongs to optimists; the pessimists are only spectators.”
– Mark Mobius

Over the years, I’ve interviewed some unusual stars in the political and financial landscape, including Warren Buffett, the late Jack Bogle and former President Bill Clinton.

At this year’s MoneyShow Orlando, I interviewed the legendary “international man” Mark Mobius. Based in Singapore, he manages Mobius Capital Partners and travels regularly around the world looking for the best opportunities. 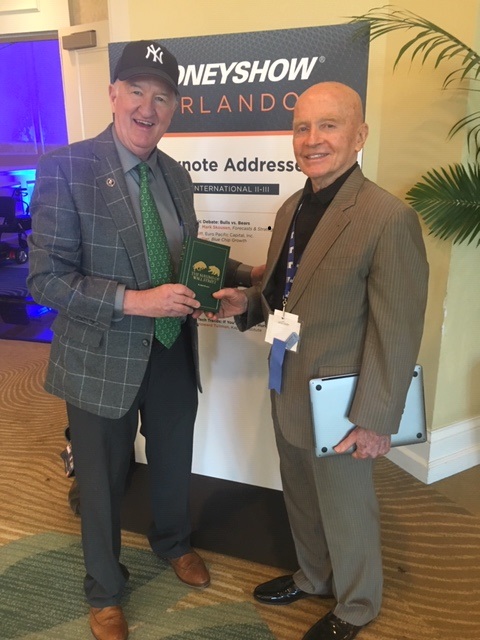 Mark Skousen presents a copy of The Maxims of Wall Street to Mark Mobius
I admire Mobius’ success, especially because emerging markets – often called frontier markets or even submerging markets – are the toughest place to invest in the world.

Somehow Mobius has survived and prospered in this high-risk arena. During Mobius’ tenure as manager, the Templeton Emerging Markets Fund was ranked the No. 1 emerging markets fund in the world.

In other words, Mobius’ fund could have more than quadrupled your initial investment in 1987 and advanced it fivefold if you reinvested your dividends and distributions.

Due in part to this incredible success, Mobius was recently ranked by Bloomberg as one of the top 50 most influential people in the world.

But he paid a heavy price for this honor. After earning a Ph.D. from MIT, he was hired by Sir John Templeton in 1987 to run his emerging markets fund. Mobius spent the next 30 years living on a 747. He confesses:

I’d put in enough time on commercial flights to earn myself a number of frequent-flier first-class flights to the moon. I’d toured rubber plantations in Thailand and road-tested bikes over the pothole-ridden roads of rural China. I’d choked on roasted camel’s meat, sheep’s eyeball, guinea pig and dined (surprisingly well) on scorpions on toast. I’d hobnobbed with princes, potentates, and pashas, and been swindled in souks so labyrinthine I’m still amazed I ever found my way out. I’d taken bone-jolting rides on mountain roads that would have turned my hair gray if I had any left to turn. All to find “undervalued companies” before other investors do.

As for where to invest today… he told me that his favorite markets are India, Brazil, Korea and Russia…

It is not always possible to predict whether a company is going to be successful or unsuccessful, so it is necessary to diversify. If you search worldwide, you will find more bargains and better bargains than by studying only one nation.

He also believes that you should “always have an exit strategy.” He sold his position in Venezuela in 2000 after Marxist Hugo Chávez took over. As Mobius’ mentor, Sir John Templeton said, “Avoid investing in those countries with a high level of socialism or government regulation of business. Economic growth and bull markets depend on a strong free-enterprise system.” (This is one of many insightful quotes found in The Maxims of Wall Street.)

Mobius learned his investment philosophy from Templeton. Even though emerging markets are volatile, Mobius is not a market timer. He patiently waits for a crash and then searches for value: “We are value investors, so we don’t mind seeing crises or downturns. I like to buy stocks whose prices are going down, not up.”

He focuses on the fundamentals of foreign companies: “The people behind the company are just as important as the numbers. You have to talk to company management, look into their eyes, and determine whether they are reliable.”

That’s why he’s constantly on the road or in the air. He admitted, “For most people forced to endure it, homelessness is the ultimate sacrifice.”

The Trump trade war is serious, but Mobius is optimistic. He is a longtime observer of China, and he surprised me when he said China is not in serious trouble, even though its economy is slowing sharply and its stock market is down 80% or more.

According to Mobius, China will take a long-term view and give a few concessions to Trump. He noted the Chinese are wisely diversifying by investing heavily in Africa and Latin America.

Mobius’ two funds are not available to U.S. citizens, and I would not recommend the Templeton Emerging Markets Fund under the current manager, Chetan Sehgal, who has yet to prove himself. A better choice would be the American Funds New World Fund (NWFFX), which has been run since 1999 by market veteran Mark Denning.

You can always count on a Mark to make good investment choices for you!

P.S. Half Off The Maxims of Wall Street

Hundreds of valuable Wall Street sayings like the ones quoted above are found in my one and only collection, The Maxims of Wall Street, now in its fifth edition with over 25,000 in print. The book contains more than 800 quotes, proverbs, poems and short stories offering a wealth of insights about investing. The book is endorsed by Warren Buffett, Alexander Green, Nicholas Vardy and Jack Bogle. Dennis Gartman says, “It’s amazing the depth of wisdom one can find in just one or two lines from [Maxims]. I keep it on my desk and quote from it often.”

And here’s a special deal for Oxford Club Members: Buy the first copy for $20, and all additional copies are only $10. I pay the U.S. postage and autograph each copy. Also, if you order an entire box of 32 books, you pay only $300 postpaid. Hetty Green said it best: “When I see something cheap, I buy a lot of it.”

Three ETFs for Your Income Portfolio