The Chart Gold Bugs Love… and the One They Hate

Earlier this month, I was scheduled to deliver a talk at FreedomFest in Las Vegas.

Unfortunately, thanks to a travel mix-up, I was unable to deliver it. (Although I did get to express my views on a number of panels at the conference.)

The topic: Is gold or stocks the superior long-term investment?

If you’re a long-term reader of this e-letter, you already know the answer.

Nothing matches the long-term returns generated by a diversified portfolio of common stocks. (Or better still, uncommonly good stocks.)

Yet FreedomFest attracts a lot of hard-money types. Attendees often tell me they have 50%… 75%… or their entire portfolio in gold.

Don’t get me wrong. I own a collection of gold bullion coins myself. (Sometimes I even get them out and look at them.)

And The Oxford Club recommends that Members have 5% of their total liquid portfolio in blue chip gold mining shares.

(Unlike gold bullion – which is not a productive asset – gold mining companies can increase returns by lowering costs, increasing production or improving efficiencies.)

Yet some insist that gold itself is the ultimate inflation hedge.

It is a hedge. But it’s not the best, not by a long shot.

I’ll prove it to you by showing you the chart that gold bugs love – and then the one that blows their minds.

Let’s start with the one they love: 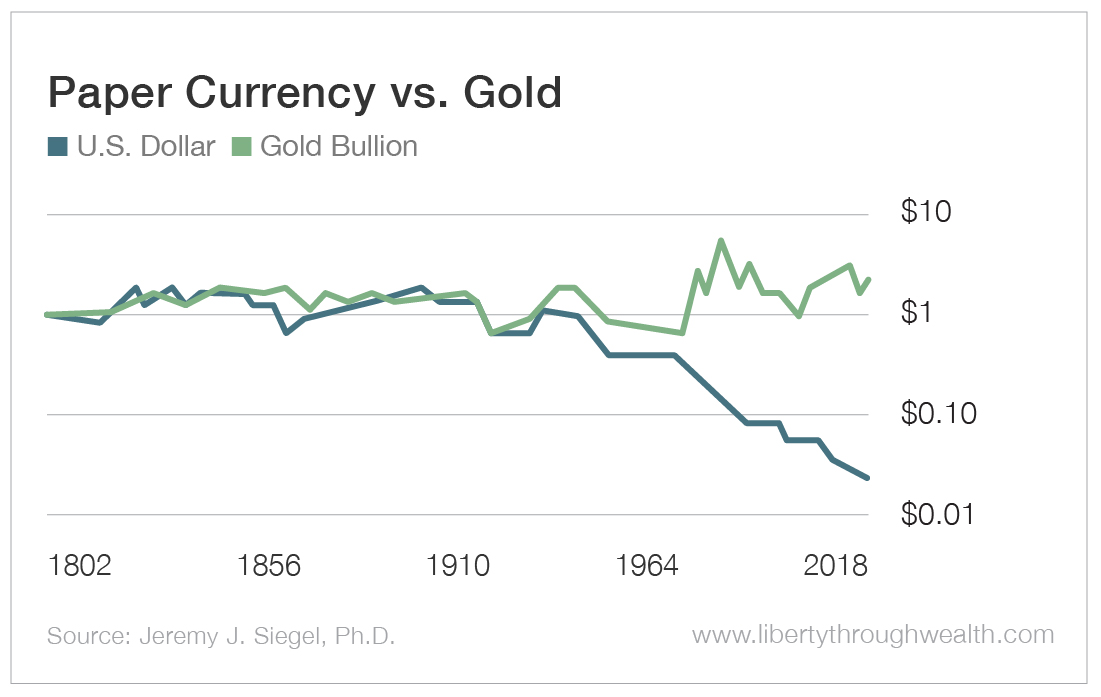 Compiled by Jeremy J. Siegel, Ph.D., of the Wharton School – and extended by my research team to include the last few years – it shows the inflation-adjusted value of gold versus the dollar from 1802 through 2018, a period that includes expansions, recessions, depressions, financial panics and wars.

Thanks to inflation, the real purchasing power of a paper dollar – held, say, in a safe-deposit bank – declined to just $0.046.

That’s pretty sad – and a good reason to get those greenbacks out from under the mattress.

You can see that gold has more than held its own against the ravages of inflation. In fact, it’s worth more than three times as much.

If I were given a choice between holding paper currency or gold bullion over the next 20 or 30 years, I wouldn’t furrow my brow for long. I’d choose gold.

However, you have more choices today than just paper currency or gold. You can, for instance, put your money in Treasury bills, bonds or a diversified portfolio of stocks.

That takes me to the graph that gold bugs hate… 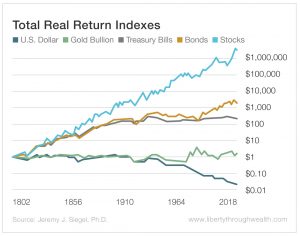 It, too, is based on data rigorously compiled by Siegel and extended by my research team.

The bottom two lines – the dollar and gold – are identical to the first chart.

As you can see, a single dollar invested in T-bills in 1802 and continually rolled over grew to $267.73 in inflation-adjusted terms. That’s much better than the return on gold over the period.

A dollar invested in bonds with interest payments reinvested turned into $1,393.40 in inflation-adjusted terms.

And a dollar invested in common stocks with dividends reinvested turned into – trumpets, please – more than $1.39 million in inflation-adjusted terms.

Yes, it’s rallied handsomely this year. But it’s well below the high of $1,917.90 an ounce that it hit eight years ago. In fact, it hasn’t kept up with inflation over the last 40 years.

Incidentally, we don’t have data on stocks going back more than a couple hundred years. But we have records on gold going back thousands of years.

And the story is the same. Gold holds its value. Paper currencies do not.

However, gold hasn’t done much more than hold its value since the dawn of civilization.

That’s why when gold bugs tell me the metal is overdue for a rally, I say, “Yeah, a couple thousand years overdue.”

You’d think a chart like the one above would change people’s minds.

Marshal all the arguments you want. But don’t expect many converts.

How to Crash-Proof Your Portfolio

Three ETFs for Your Income Portfolio