Note from Senior Managing Editor Christina Grieves: Is it gold’s time to shine again? Our good friend Andy Snyder – Pillar One Advisor and founder of Manward Press – sure thinks so. And today, he’s got the chart to prove it. It’s a clear and obvious chance to make some money. Check it out below.

And if you want to learn more about his favorite way to play the trend, click here. It has to do with an exciting new way to get in on some of the hottest companies before they go public. Get all the details here.

Let me show you how to make some money in this market.

It has to do with gold and one of the most powerful economic forces on the planet.

We’re convinced this simple little trick is the difference between reliably making money and praying things work out.

What’s happening in the gold market is proof.

As inflation ticks higher and drives real interest rates lower, gold is surging once again. (Remember, real rates are the nominal rate that’s reported in the press… minus the rate of inflation.)

In fact, just as I predicted in a recent note to my readers, gold has seen its price climb by more than $100 in just the last three weeks.

This chart shows why… 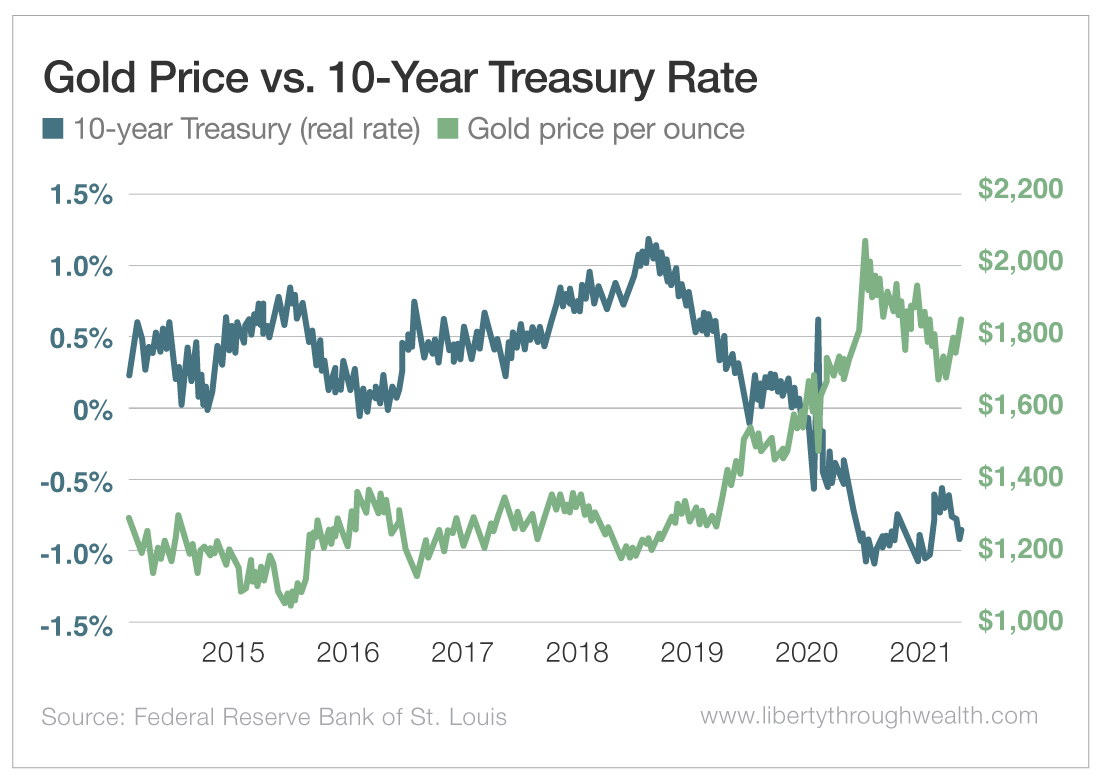 The green line is the price of gold.

But the math doesn’t matter. It’s the relationship that counts.

Forget tracking mining output, central bank demand or the size of this year’s “Indian wedding season.” That’s silly. All that matters is that when one of these lines dips, the other rises.

It gives us a clear and obvious chance to make money.

Just this week, Fed officials once again said to expect rates to stay lower for longer.

That means the inflation that even the blind see coming will pull real rates even lower. Without rising rates, we could see real rates fall to record lows.

That means, of course, as with the record-low rates we saw a year ago, gold should soon be hitting record highs.

The price of gold is likely to head 10% to 15% higher in the next few months.

The investment opportunities are clear.

On the simplest side of things… buy gold. An exchange-traded fund (ETF) will get the job done, but physical gold ticks all the boxes.

For a bit more leverage and therefore a bit more risk, buy shares of a gold miner.

That’s what we recently did in our Venture Fortunes subscription service.

Until recently, those would be our choices… buy a miner, buy an ETF or buy the real stuff.

But thanks to one of the hottest trends on Wall Street right now, there’s another option. It will cost you less than $10 per share… and if things don’t go right, there’s a good chance you’ll get your money back.

SPACs – or special purpose acquisition companies – offer a speculative way to get into pre-IPO opportunities like never before. Although they’ve been around for many years, not until very recently have they evolved into something everyday investors would want to be a part of.

In this case, a new SPAC – African Gold Acquisition (NYSE: AGAC) – just listed on the New York Stock Exchange in March. Its aim is to soon bring a private gold mine to the public markets.

How many folks have ever had the chance to buy a gold mine… before it went public?

There’s more you need to know about SPACs and how to play them before you buy. With as many as 700 expected to hit the market this year… opportunity abounds. But details matter.

That’s why I recently went to New York for a very big interview. I talked with a popular financial reporter about SPACs and, in particular, a very fast-moving pre-IPO opportunity.

The folks behind it plan to make a BIG announcement to their investors on June 10… just a few days from now.

You’ll want in on the action.

All the details are at this link.

How to Profit From the Buyback Bonanza of 2021