A Classic Market Barometer Signals “Risk On” for 2023

Like many things in this world, the stock market gets weirder the more closely you observe it.

One odd phenomenon I’ve observed over the years is that long-term market patterns tend to hold, yet the forces and events that drive those patterns change considerably from year to year.

For example, let’s look at the “first five days” indicator, which is particularly relevant this week.

This theory holds that the first five trading days of each year are an excellent predictor of how the market will perform for the entire year.

According to the Stock Trader’s Almanac 2023, since 1950 there have been 47 years when the market was up over the first five trading days of the new year.

In 39 of those years, the market was also up for the entire year. That’s about 83% of the time, which is a very impressive prediction rate.

Because the market was up about 1.5% the first five trading days of this year, as measured by the performance of the S&P 500 from January 3 through January 9.

In fact, there’s even better news here if you believe in this particular market indicator.

According to the Almanac, when the market rises more than 1.5% over those first five days (which has occurred 21 times since 1950), the full-year gains are truly impressive. The average full-year gain in these years is nearly 18%.

Compare that with the average yearly market gain of about 11% over that time – it’s a 64% outperformance.

So according to this indicator, we should be in store for a very good market return in 2023.

But here’s the weird thing: All these market performances – both the first five days of January and the full year – had different causes or different drivers.

Some of the years that adhered to the pattern, like 1999, came near the end of long bull markets. Others, like 2010, came right at the beginning. In some years the Federal Reserve was easing financial conditions. In others it wasn’t.

Looking closely at the 21 years when the market rose more than 1.5% the first few days and had big gains for the full year, I could find no common factor that drove the market up.

That raises the question: Exactly why are the first five days a good indicator of what the market will do for the full year?

It’s not clear at all.

However, if the pattern holds this year, we might at least know why the first five days could accurately predict a good year for the market…

It’s because the market rally so far this year has been driven largely by last Friday’s employment report.

That report continued to show strength in the labor market, with employers adding 223,000 new jobs in December. While that’s a healthy amount, it’s the smallest monthly gain in a year – indicating that the economy is gradually cooling off. 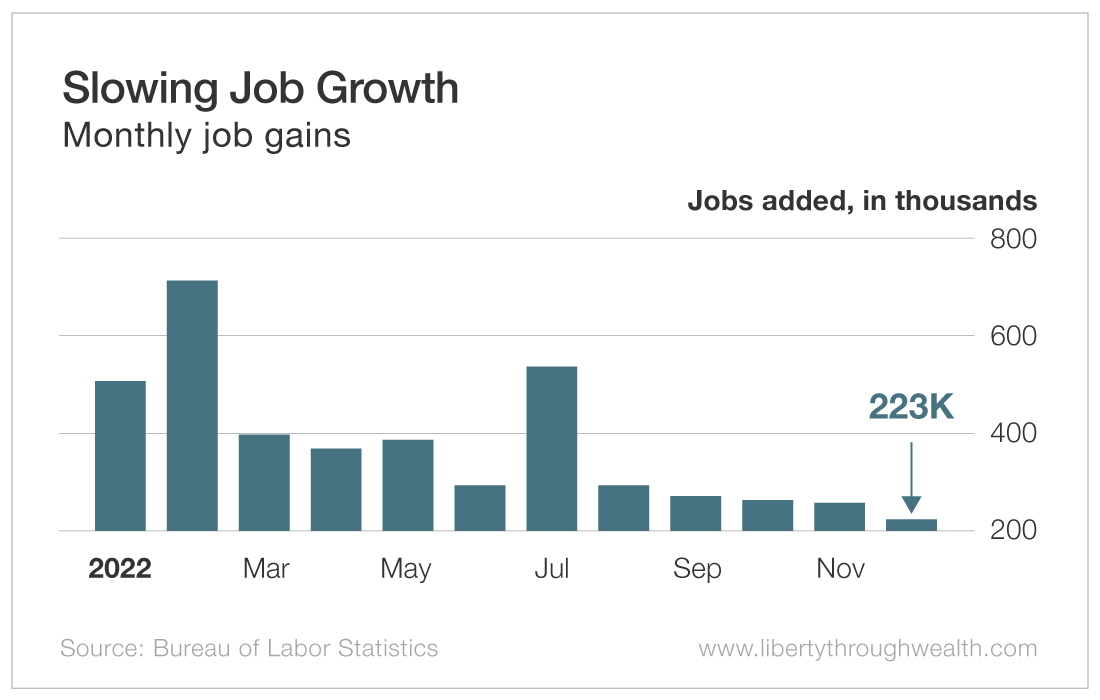 If that’s not enough, wage growth slowed in December, both on a month-over-month and a year-over-year basis.

And the labor force participation rate ticked up a bit in December, another promising sign that people are returning to work. If that trend continues, employers will struggle less to fill jobs and wage growth will further moderate.

The Federal Reserve’s dream scenario is that it can reduce wage inflation without having to push the economy into recession or cause mass layoffs.

So all of this data points to the possibility of something that seemed highly unlikely just a few months ago: a soft landing for the economy.

And that’s why I think this year’s first five trading days could be an accurate indicator of how the market performs this year. Because a soft landing – the economy cools but avoids recession – would kick-start the next bull market.

The One (and Only) Chart Pattern You Need to Know

Beware the Allure of Victimhood