America was in its first year of the Reagan presidency…

The first space shuttle had launched in April…

And I had just taken my SATs after memorizing the definitions of 3,000 recondite (i.e., arcane, obscure) words.

While I had learned what words like “callipygian,” “distaff” and even “recondite” meant…

I had no idea what a bond market was.

Much has changed since that fateful day.

The SAT no longer directly tests your vocabulary…

The Dow Jones Industrial Average has risen from about 875 to just shy of 25,000…

And today, I’m writing about how yields on the 30-year U.S. Treasury bond tumbled from more than 15% in 1981 to a little more than 3% today (in what has turned out to be the second-longest bull market of the modern financial era). 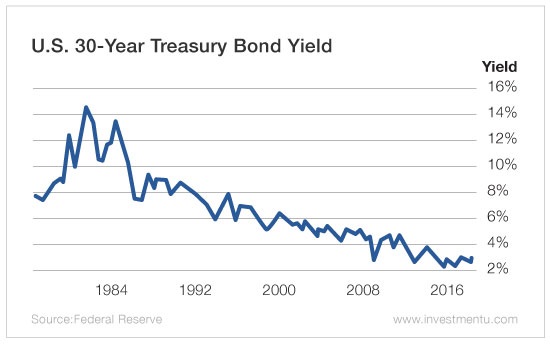 Why the Bond Bubble Has Finally Burst

Calling the end of the historic bull market in bonds has been a mug’s game.

“Bond King” Bill Gross – author of the tweet above – first called for the end of the bond bull market in 2010.

However, much like the story of “The Boy Who Cried Wolf,” financial markets have become immune to gloomy pronouncements.

Here’s why I think this time just might be different…

The U.S. has been enjoying a “Goldilocks economy” – not too hot, not too cold.

And, after adjusting for inflation, the typical American family’s net worth grew 16% from 2013 to 2016 (even if the gains were uneven).

In short, the economic “party” is in full swing.

As former Federal Reserve chairman William McChesney Martin put it, the Fed’s job is “to take away the punch bowl just as the party gets going.”

Sure enough, current Fed Chair Jerome Powell has suggested he expects to raise interest rates at least three times over the coming months.

As a reminder… bond prices fall as interest rates go up.

The Best Opportunity in the Coming Sell-Off

So how should you position your portfolio?

Take it a step further by reducing your holdings of bonds in your portfolio, especially in 401(k) or IRA accounts where your gains are tax-advantaged.

Second, consider ways you can profit from the demise of the bull.

Luckily, there is an exchange-traded fund (ETF) that allows you to do just that.

Even as the S&P 500 is treading water, the ProShares Short ETF has already gained 6.98%. 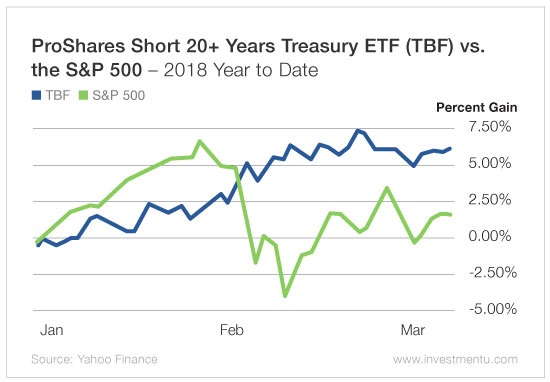 Here’s What Worries Me…

I have a confession to make.

This is not the first time I have recommended betting against U.S. Treasurys.

If that’s not embarrassing enough…

One more thing bothers me about this trade.

The reasons for betting against U.S. Treasurys are just too obvious.

If I’m making the case for it here…

Hundreds of billions of dollars of capital throughout the world will be invested similarly.

I wonder… Will there be investors willing to take the other side of the trade?

So I comfort myself with the following historical perspective…

Rising interest rates across the globe are inevitable – it’s not a question of if but when.