A friend of mine recently asked me over a couple pints of beer at my local pub, “So what’s your favorite book on investing, Nick?”

It was a simple question.

But I couldn’t help but give him a complicated answer.

Fans of George Soros would recommend his classic, The Alchemy of Finance.

And Edwin LeFèvre’s Reminiscences of a Stock Operator may be the most popular book among pure speculators.

But for me… it’s hard to recommend a single book above all others.

That’s because I don’t believe that any unique investment strategy works all the time.

Each strategy has its day in the sun.

The trick is to understand which style to use when.

I’ll discuss one of my favorite strategies for today’s markets below.

The good news is you can invest with it instantly through an ETF.

The late Sir John Templeton made his fortune investing in global stock markets.

In contrast, entrepreneur and stockbroker William J. O’Neil is a firm believer in the freedom and opportunities available to investors in the United States.

Sure, some investors may place their bets on China, expecting that economic behemoth to inherit the mantle of global economic leadership from the United States.

But much like Warren Buffett and Vanguard Group founder John Bogle, O’Neil’s overarching bet is to profit from the long-term upward trajectory of the American economy.

After all, the United States remains the world leader in high-growth entrepreneurial companies.

And O’Neil’s “secret” is merely to invest in these U.S.-based engines of innovation.

The Birth of CAN SLIM

Back in the 1950s, O’Neil started studying “what made great stocks great.”

He published the results of his research in his now classic book, How to Make Money in Stocks: A Winning System in Good Times or Bad.

Thus, the “CAN SLIM” investment philosophy was born.

Each letter in CAN SLIM stands for one of seven traits to look for in a stock. 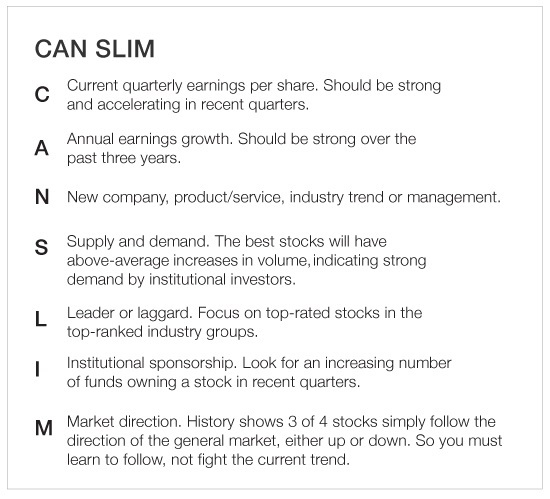 As a growth investor, O’Neil does not believe in investing in only cheap stocks. Cheap stocks are cheap for a reason.

He doesn’t mind paying a premium for stocks with good prospects.

O’Neil’s philosophy is to invest in the best of the best.

As O’Neil says, “You can’t buy a Mercedes for the price of a Chevy.”

CAN SLIM is the strategy behind stock selection for Investor’s Business Daily‘s famous IBD 50 Index – its top 50 recommendations in U.S. stock markets.

On paper, the IBD 50 Index boasts a remarkable track record.

That’s more than triple the total return of the S&P 500 over the same period.

Until recently, the IBD 50 Index’s outstanding performance was only theoretical.

By tracking the IBD 50 Index, you can see whether you can replicate the returns of the CAN SLIM philosophy in the real world.

Among the 36 “smart beta” ETF strategies I track on a daily basis, the IBD 50 ETF was the top-performing diversified strategy of 2017, logging a gain of more than 37.6.

Here’s why I think the IBD 50 ETF will continue to trounce the broader U.S. stock market over the next 12 to 18 months.

Yet, as I’ve written before, the end of a bull market does not feel like this.

Today, we are probably in the eighth inning of a nine-inning game.

But keep this in mind: The IBD 50 ETF is chock-full of highly volatile growth stocks.

And these are precisely the kinds of stocks where you’re likely to see the most significant gains in the final innings of a bull market.

Yes, one day the music will stop.

And the stocks in the IBD 50 ETF will get hammered when the bull gets mauled by the bear.

Until that day arrives, I recommend you bet on the IBD 50 ETF and enjoy the ride.

Why You Should Try Everything Once… Even When...

The Next Big Tech Boom Is Happening Right...

Your Single Most Important Investment Decision

These Stocks Are Poised to Skyrocket