Our keynote speaker at this year’s FreedomFest was controversial business guru Kevin O’Leary. He is a regular on ABC’s Shark Tank and, despite his nickname “Mr. Wonderful,” is famous for saying things like “You’re dead to me.”

[Pictured above: Mark (center) moderates the debate between Mackey (left) and O’Leary (right).]

According to Mackey, most entrepreneurs go into business with a higher purpose: “the good, the true, the beautiful and the heroic,” as he says in his book Conscious Capitalism: Liberating the Heroic Spirit of Business.

O’Leary, on the other hand, argues that only profits matter. He harshly declares, “I’m not making friends. I’m making money. If you want a friend, buy a dog.”

O’Leary doesn’t believe that emotions are helpful in business: “Money and tears don’t mix.” He is turned off by entrepreneurs who cry on Shark Tank. “Tears won’t add any value to your company’s performance. A business is not a charity.”

In his autobiographical book Cold Hard Truth: On Business, Money & Life, O’Leary makes some statements that are as outrageous as they are hilarious…

“Your desk says a lot about you. Keep it clean and orderly… if you work for me, and I see a stuffed animal in your workspace, I’ll light it on fire. Then I’ll fire you.” (In our interview, he confirmed that he hates stuffed animals.)

“I get up at 4:30 in the morning and I go to bed sometimes as late as midnight… I expect everyone who works for me to keep the same odd and ridiculous hours.” Seriously? Very.

O’Leary on Money and Investing

O’Leary made more sense when talking about money and investing. Alex Green and I interviewed him about personal finance and investment strategies. 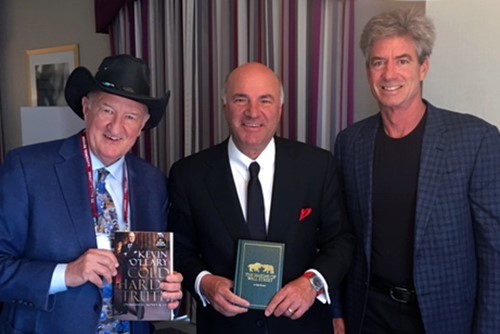 O’Leary speaks to students often about succeeding in life. He agrees with Shark Tank colleague Mark Cuban, who says, “Follow the green, not the dream.”

You may have to work for peanuts or do things you’d never do on your own. (O’Leary was once required to eat cat food for a boss.) You may have to postpone your dreams until you make enough money to follow your passion.

He urges young people to get a good education, work hard, stay out of debt, avoid credit cards and start investing.

O’Leary also gave me this quote to add to the next edition of my book The Maxims of Wall Street: “Getting rich is easy if you follow three rules: Spend less, save more, invest the rest.”

The Special Advantages of “Growth and Income”

I showed him a copy of my investment newsletter, Forecasts & Strategies, and told him that I’ve been recommending growth and income stocks for years… and beating the market.

He nodded in agreement – he has always been a big fan of dividend-paying stocks. As Jeremy Siegel, finance professor and “the Wizard of Wharton,” states, “Dividends are the critical factor giving the edge to most winning stocks in the long run.”

O’Leary’s funds have done well but require high management fees. He justifies the higher expense ratio because, he claims, his funds are less volatile and do better during bear markets. Perhaps his best-known exchange-traded fund (ETF) in the U.S. is O’Shares FTSE US Quality Dividend ETF (NYSE: OUSA). The yield is 2.59%.

My own dividend-paying recommendations have done better. One in particular – a “private equity” income play – has outperformed the S&P 500 and Warren Buffett since going public in 2007. Read about it here.

P.S. Alex and O’Leary are big fans of my annual FreedomFest event, “the greatest libertarian show on earth.” When we announced next year’s celebrity speaker, it created a sensation. More than 200 people registered on the spot.

Watch the three-minute trailer (password is ff2020) announcing “the most dangerous, polarizing figure since Gandhi” and “the most important spokesman for liberty and civic virtue since Milton Friedman.”

When one of my students from Chapman University saw who the keynote speaker will be next year, he responded, “I must be dreaming. Unbelievable! You know I will be there in an absolute heartbeat!”

Liberty Through Wealth readers can get in on the super-early-bird discount for only $299, but this one-time offer is available only until July 31. You will never see this low price again. To join us, sign up at www.freedomfest.com, or call toll-free 855.850.3733, ext. 202.

How the Rich Get Richer… and You Can...

The Connection Between Self-Compassion… and Investment Success

How Investing in Liberty Will Boost Your Portfolio

What Rip Van Winkle Can Teach You About...