So, who is the greatest investor in history?

Despite trailing the S&P 500 over the past 15 years, Warren Buffett is the name most likely at the top of the average investor’s mind.

Yet in terms of annual returns, the Oracle of Omaha barely makes it into the top five.

Instead, the top dog distinction belongs to a former mathematics professor most investors have never heard of: Jim Simons, founder of Renaissance Technologies.

Since 1988, Renaissance’s flagship Medallion Fund has generated average annual returns of 66% before fees.

This extraordinary performance means a dollar invested in the fund in 1988 would have grown to about $27,000 by the end of 2018, net of fees.

No other investor comes close. 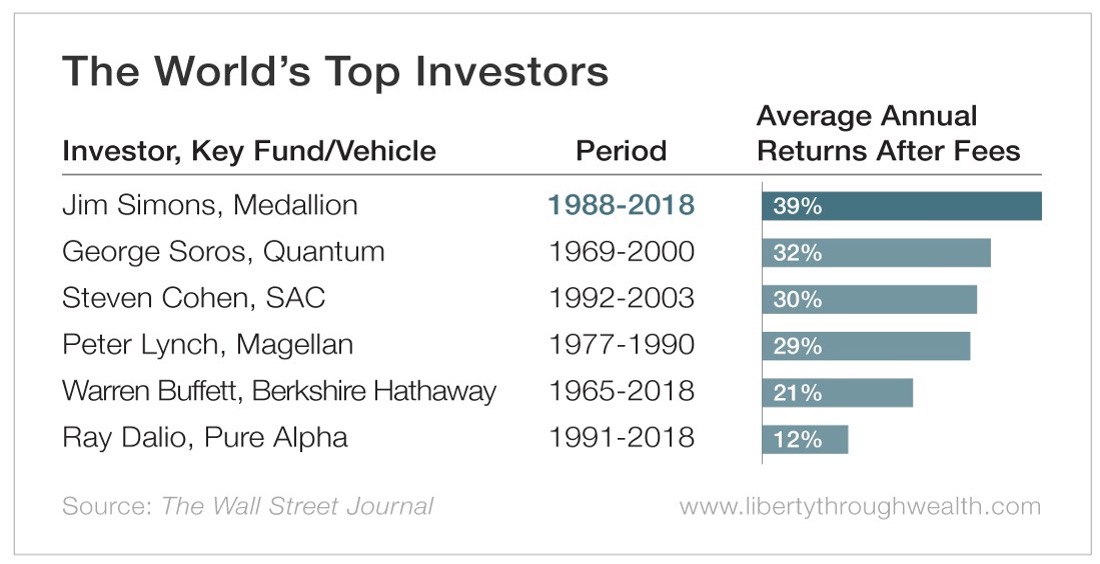 How has Renaissance fared in the recent coronavirus crash?

According to The Wall Street Journal, Renaissance’s Medallion Fund is on track for its best year ever, up a stunning 24% through April 14.

This includes a 9.9% gain in March – when global stock markets plunged.

A sure sign of Renaissance’s success is that it’s even getting under the normally avuncular Buffett’s skin.

At this year’s annual Berkshire Hathaway meeting in Omaha, a dour and shaggy Buffett called out Simons for Renaissance’s high fees.

Buffett may have been complaining, but Renaissance’s investors are more than happy with their Buffett-beating returns.

Simons might be the smartest investor on the planet.

Born in 1938 in Boston, he is the son of a shoe factory owner. He attended MIT and earned his Ph.D. from Berkeley by the age of 23. He became the National Security Agency’s leading codebreaker by 26. He won geometry’s top academic prize at 36.

Eager for a new challenge, Simons abandoned academia by age 40.

He set himself a single objective: to get rich by trading the markets.

Simons launched Renaissance Technologies in 1978. He chalked up some early successes with simple technical strategies.

But his success was touch-and-go.

At one point, Renaissance racked up losses that were so bad that it had to stop trading. Employees feared the fund would close up shop.

Simons was distraught. He confessed his fear that he was “just some guy who doesn’t really know what he’s doing.”

This approach was a good fit for Simons. Mathematicians and scientists saw patterns where finance professors saw randomness. And Simons had found the emotional ups and downs of investment decision making too hard to handle.

A team of computer scientists based in Berkeley, California, uncovered dozens of reliable and repeatable short-term patterns in the market. By placing thousands of trades and holding positions for just a few days, Renaissance became the equivalent of a gambling casino.

The breakthrough came a year later in 1990 when the Medallion Fund scored a gain of 55.9%.

So just how does the Medallion Fund generate enormous profits, day in and day out?

Harnessing vast processing and intellectual firepower, Renaissance sifts through the market noise to find repeating patterns that are statistically significant.

It then trades these patterns in a short-term, quantitative trading strategy across stocks, bonds, futures, commodities and currencies.

These robust, short-term predictions allow Renaissance to leverage its bets and magnify its profits.

This approach crushes the returns generated by Buffett-style fundamental investing.

Value investors are lucky if they double their money in two years. A quant trader who makes 5% on a trade every two or three days consistently will end up far richer.

How to Master Your Emotions and Make Good Investment Decisions