Why Green Hydrogen Is the Holy Grail of Renewable Energy

Note from Managing Editor Allison Brickell: Today we’re featuring an article from David Fessler, The Oxford Club’s Engineering Strategist. Dave is our go-to expert on everything from energy to cutting-edge technology. So when we heard about “green hydrogen” – and its potentially huge impact on the planet – we had to get Dave’s take.

For the last 100 years or so, fossil fuels have made up about 80% of our energy supply. Today, they are widely seen as the main contributors to climate change.

They are responsible for more than 75% of U.S. greenhouse gas (GHG) emissions. And in 2018, burning fossil fuels spewed 5 billion metric tons of carbon dioxide into the atmosphere.

In order to reverse the harmful effects of climate change, the world is rushing to replace fossil fuels with non-GHG-emitting ones. But it’s a herculean task. 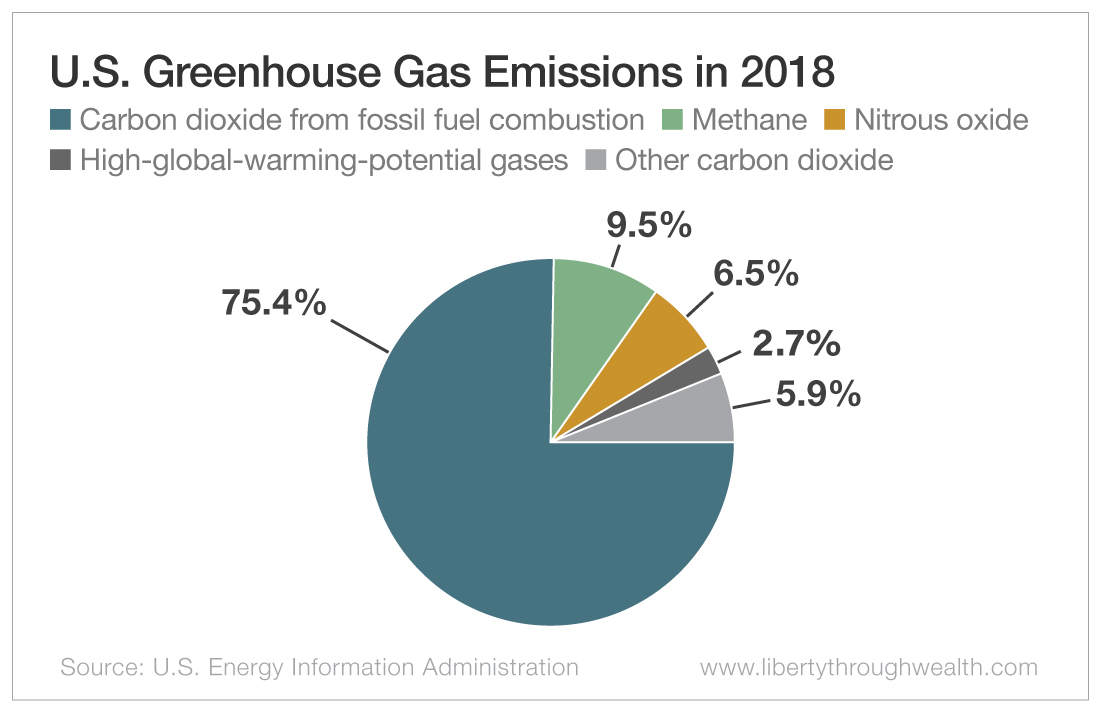 Renewable energy sources – like wind, solar, hydro and geothermal – are part of the solution. And so is electrifying our transportation sector.

But there is another pillar of technology needed to get the world to a net-carbon-neutral state. And it presents some fantastic investment opportunities.

Hydrogen is the lightest element in the universe. It’s also a versatile carrier of energy with exceptional energy density.

The color attached to hydrogen’s name refers to how it’s made – not the actual color of the gas.

The majority of the remaining hydrogen is “brown.” It comes from coal gasification.

We have used these methods for decades to make hydrogen. But they throw off tons of GHGs as byproducts.

Changing today’s hydrogen production to add carbon capture and storage creates “blue” hydrogen. But this hasn’t been commercialized and scaled to needed levels.

That brings us to “green” hydrogen. Green hydrogen is the holy grail that climate watchdogs have been hoping for.

The technology behind green hydrogen is totally different from other methods used to produce the gas. This hydrogen is produced by electrolysis.

Renewable energy-powered electrolyzers separate water into oxygen and hydrogen. As renewable energy continues to roll out in the coming decades, green hydrogen production will rise.

Whenever surplus renewable energy is available, it can be used to make green hydrogen, which can then be stored until needed or sold.

Storing green hydrogen means we can use it at a later time. It gives utility operators a balancing tool for intermittent renewable energy sources, like wind and solar.

In addition to hydrogen’s uses mentioned above, green hydrogen opens up a wide range of applications too.

Steelmaking and cement-making are two industries that are very difficult to decarbonize. Each has a different production process. But both share one big challenge: needing large amounts of continuous, high-temperature heat.

And we can’t just stop making either material. Cement and steel are essential building blocks for today’s modern construction. But each of them is responsible for about 7% of energy-related GHGs.

That’s because their heat sources are fueled by natural gas. Switching to green hydrogen is a key part of decarbonizing them.

Integrating green hydrogen into the existing natural gas pipeline network will require some changes. Hydrogen has a much lower volumetric density than natural gas.

Experts believe green hydrogen costs could drop by one-third by 2030. The automated production of electrolyzers will help.

Even some of the major oil companies are exploring the green hydrogen space. It’s not a question of whether green hydrogen will be widely adopted, but when.

Today, green hydrogen is where electric vehicles were 10 years ago. Its cost is currently too high.

But technology marches on, and it will do so in the green hydrogen sector. And savvy investors are already positioning their energy portfolios to include green hydrogen.