The Global Space Economy’s Meteoric Rise Is Only Getting Started

Note from Senior Managing Editor Christina Grieves: Readers of Liberty Through Wealth know that Alexander Green often mentions one very important rule in investing: When revenue goes up, especially quarter after quarter and year after year, so does stock price. Our friend and colleague Matthew Carr, Chief Trends Strategist for The Oxford Club, agrees – and he’s discovered a company with revenue that is projected to grow 2,500% by 2023 thanks to the indispensable part it plays in the space industry.

And here’s the best part… It hasn’t even gone public yet! This is your chance to get in early and profit with this company for years to come. Matthew is revealing all the details on his No.1 play for the growing space economy – simply click here to learn more.

“Trillion” gets tossed out in conversation, especially when talking about things like government debt and spending.

We know what it looks like written out – a one with 12 zeros behind it – but we can’t truly grasp its sheer size.

There is one industry, though, where it’s a common unit. In fact, in this sector, 1 trillion is considered small – or even substandard.

What isn’t small is the opportunity here for investors. Let me show you.

Two Times Larger Than the Sun

I bought my first terabyte hard drive more than a decade ago.

A terabyte is 1,000 gigabytes – or roughly 1 trillion bytes of data.

At the time, it seemed like a massive amount of storage capacity. And I considered it well worth the couple hundred bucks I spent on it.

Today, it’s normal for USB flash drives to be 1 terabyte. And you can buy 18-terabyte hard drives.

Why the sudden need for more space? Well, every second of every day, we’re producing an exponential amount of data.

In fact, in 2020, every person on the planet created an average of 1.74 megabytes of data every second.

That’s approximately 2.5 exabytes of data each day! For reference, an exabyte is 1 billion gigabytes of data, or 1 million terabytes.

My favorite way to comprehend this amount of data is to imagine that if 1 gigabyte were equal to the size of the Earth, 1 exabyte would be the sun.

That would mean we’re creating 2 1/2 suns each day.

But data is on an exponential incline.

Humans are projected to create 463 exabytes of data on a daily basis by 2025.

Now, plenty of this data will be mundane things, like emails and social media. But the reality is we’ve also digitized entire economies and stock exchanges.

Not to mention, there’s the meteoric rise of artificial intelligence, the Internet of Things, autonomous vehicles and virtual reality.

And all of this will be fed by another of the fastest-growing sectors over the next decade.

Over the past couple of years, I’ve been telling investors to prepare for the coming space race.

But this isn’t between the U.S. and China, Russia, Europe, India, or any other country on the planet.

This is a space race between companies.

OneWeb, Project Kuiper, SpaceX and Telesat plan to put more than 46,000 satellites into orbit over the next several years. Though most of that will come from Tesla (Nasdaq: TSLA) CEO Elon Musk’s space venture, SpaceX.

SpaceX is firing tens of thousands of satellites into orbit for its Starlink communications network – which is already up and running in some parts of the world.

And this is triggering the rapid expansion – and commercialization – of the space industry. 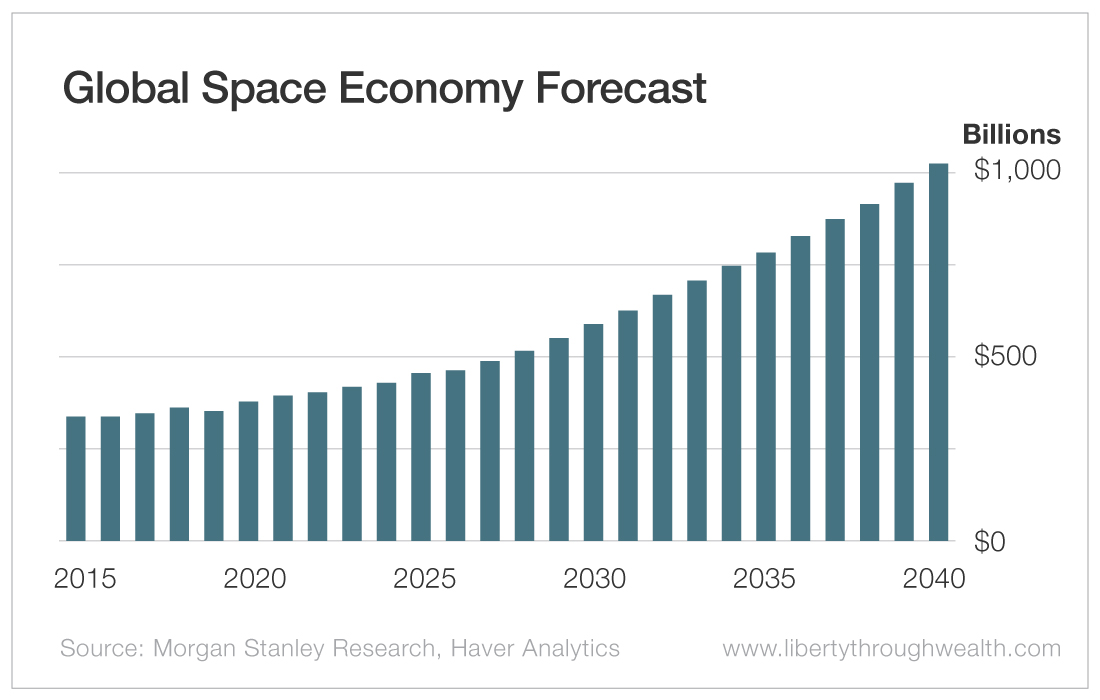 And at least 50% of this increase will come from satellite broadband demand because we are consuming data at an exponential rate.

For instance, year to date, the Procure Space ETF (Nasdaq: UFO) has gained more than 20%. That blasts past the broader markets’ performances.

But there’s likely even more upside ahead.

Because insanely large amounts of data – terabytes, exabytes and zettabytes – are fueling this growth.

The world needs satellites, which need to be launched into orbit. And those launches need to take place at spaceports.

It’s an entire ecosystem of increasing demand for decades to come… and we’ve barely scratched the surface of its potential.

One of my favorite companies right now is a key player in the space industry.

Its revenue is expected to jump an incredible 2,500% in the next two years. And, as I say, share price always follows revenue.

It’s as strong an opportunity as I’ve seen in a long time… and you can get positioned right now for around $10.

You can find out more by clicking here.

The Best Sell Strategy in a Bear Market

How to Be David to Wall Street’s Goliath

One of Our Fastest Double-Digit Gains Ever

My Journey Into Technical Analysis

What’s the Best Safe Haven During a Financial...