Note from Senior Managing Editor Christina Grieves: Today, Nicholas Vardy – The Oxford Club’s resident ETF expert – shares some exciting news in the financial sector… and the best way for investors to take advantage of it. I really look forward to Nicholas’ insights each week, so I’m especially excited to hear the in-depth investment strategies he’ll be presenting at our upcoming Wealth, Wine & Wander Retreat from August 28 through September 5.

If you haven’t already registered for this incredible journey through Paris, Normandy and Amsterdam, I strongly encourage you to act now. I don’t want you to miss out on this amazing adventure or the exclusive financial seminars that Nicholas and Alexander Green will present. We’re down to our last few spots, so reach out to Maggie Stephens at 800.638.7640, ext. 125, or Maggie@aesu.com to learn more and reserve your spot today.

A few weeks ago, I wrote about the opportunity to invest in companies that are buying back their stock.

Many U.S. blue chip companies have been generating record profits. Put another way, they have more money than they know what to do with.

So they are returning money to shareholders in the most tax-efficient way possible – by buying back their shares.

This week I want to highlight a more specialized – and leveraged – way to profit from the buyback boom.

Let’s review why buybacks are important for investors…

When a company announces that it will buy back its shares, it means a few things.

First, the company has sufficient cash on its balance sheet to buy back its shares.

In the case of banks, this means that it has more than enough capital to withstand an unexpected and severe crisis.

Second, the company is focused on maximizing returns to its shareholders.

By reducing the number of shares outstanding, management increases a company’s earnings per share.

And it does this without needing to do the hard work of wringing out operational inefficiencies from the business.

Finally, compared with dividends, share buybacks are a more tax-efficient way to return capital to shareholders.

Dividend payments to investors are immediately taxable. In contrast, share buybacks are not a taxable event.

All this takes us back to today’s opportunity in large U.S. financial stocks.

In early 2020, in response to the COVID-19 pandemic, the Fed capped banks’ dividends. It also banned banks from using precious capital to buy back their shares.

That all changed last week.

On Thursday, the Fed announced the results of the financial sector’s annual stress tests.

These stress tests are required under the Dodd-Frank Act, passed after the global financial crisis of 2008.

The scenarios included a U.S. stock market crash, a collapse in economic output and a distressed commercial real estate market.

This year’s tests concluded that the largest U.S. banks could withstand $474 billion in losses from loans and other positions… And even then, they would have more than double the required capital.

As a result, the Fed further loosened restrictions on banks’ dividends and buybacks.

That, in turn, paved the way for billions of dollars to be returned to investors.

Barclays analysts estimated the median bank of the 20 institutions it covered would return more than 100% of its earnings to shareholders over the next year.

For a bank to return the total of its annual profits over a single year is almost unheard of.

Profiting From the Bank Buyback Bonanza

So how can you profit from these looming bank share buybacks?

First, you could buy the stocks of the major banks that announce buyback programs in response to the loosening of restrictions.

JPMorgan already took the lead when it unveiled a $30 billion share repurchase plan in December. No doubt it will add to that amount in the coming months.

Second, you could buy an exchange-traded fund (ETF) that is focused on the major banks – like the Financial Select Sector SPDR Fund (NYSE: XLF).

Finally, you could place a leveraged bet on the financial sector through the Direxion Daily Financial Bull 3X Shares ETF (NYSE: FAS). 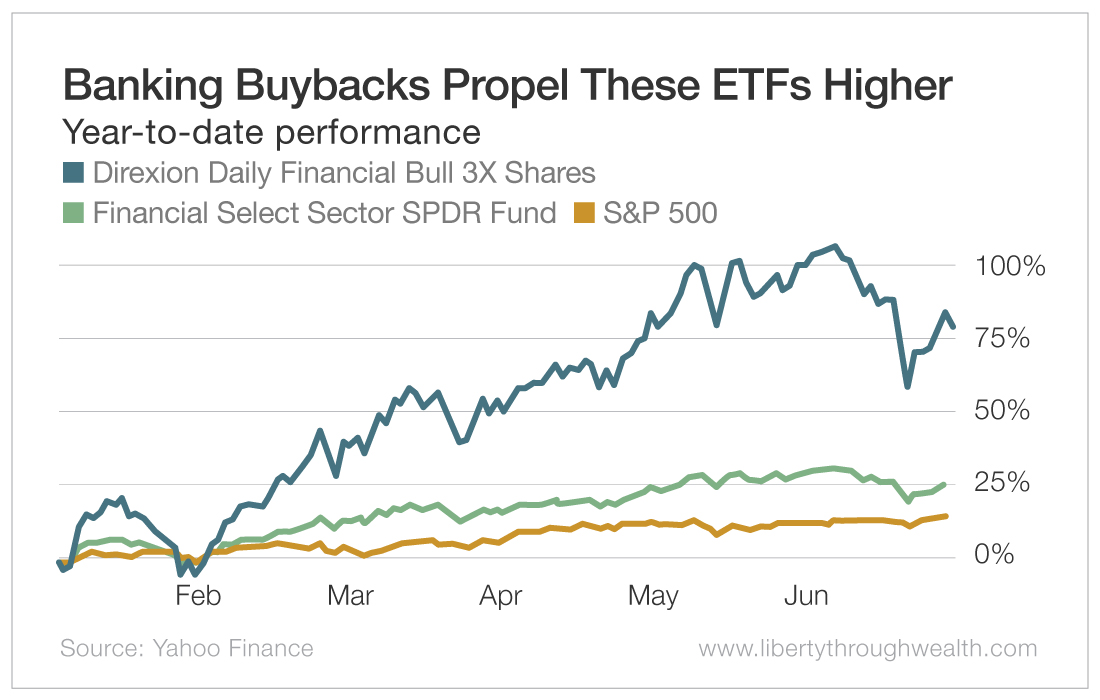 The chart above compares the year-to-date returns of the S&P 500, the Financial Select Sector SPDR Fund and the Direxion Daily Financial Bull 3X Shares.

Even a casual glance shows the remarkable impact of triple leverage on an investor’s returns.

The Direxion fund rebalances daily, so returns can vary significantly due to triple exposure to its underlying index over longer periods.

Nevertheless, the returns in a bull market are difficult to resist.

If you want to profit in the most straightforward way from the banking buyback bonanza of 2021, take a look at the Financial Select Sector SPDR Fund.

The tailwind of buybacks in the banking sector should help ensure that it continues to outperform the S&P 500.

If you want to swing for the fences, consider a smaller investment in the Direxion Daily Financial Bull 3X Shares.

But if you do, strap yourself in for a volatile ride. 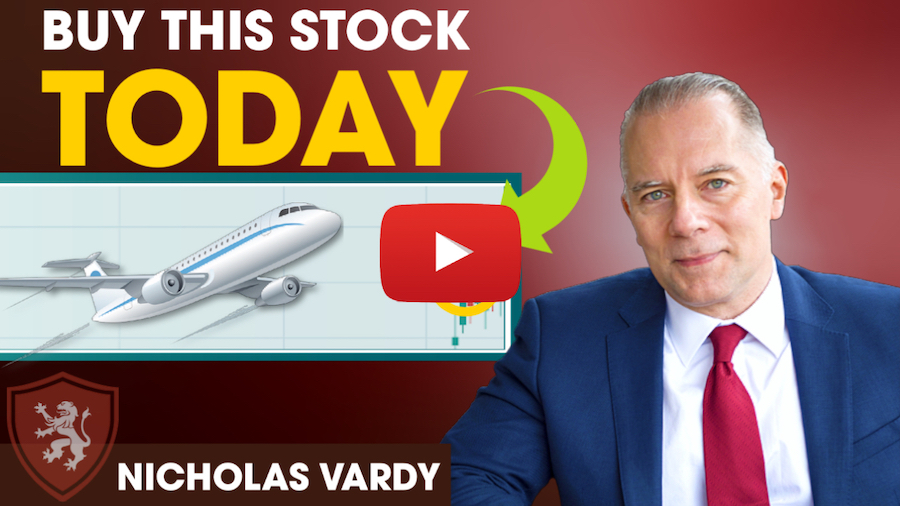 The Biggest Risk Is What You Don’t See Coming