Energy is – by a mile – the best-performing sector this year. 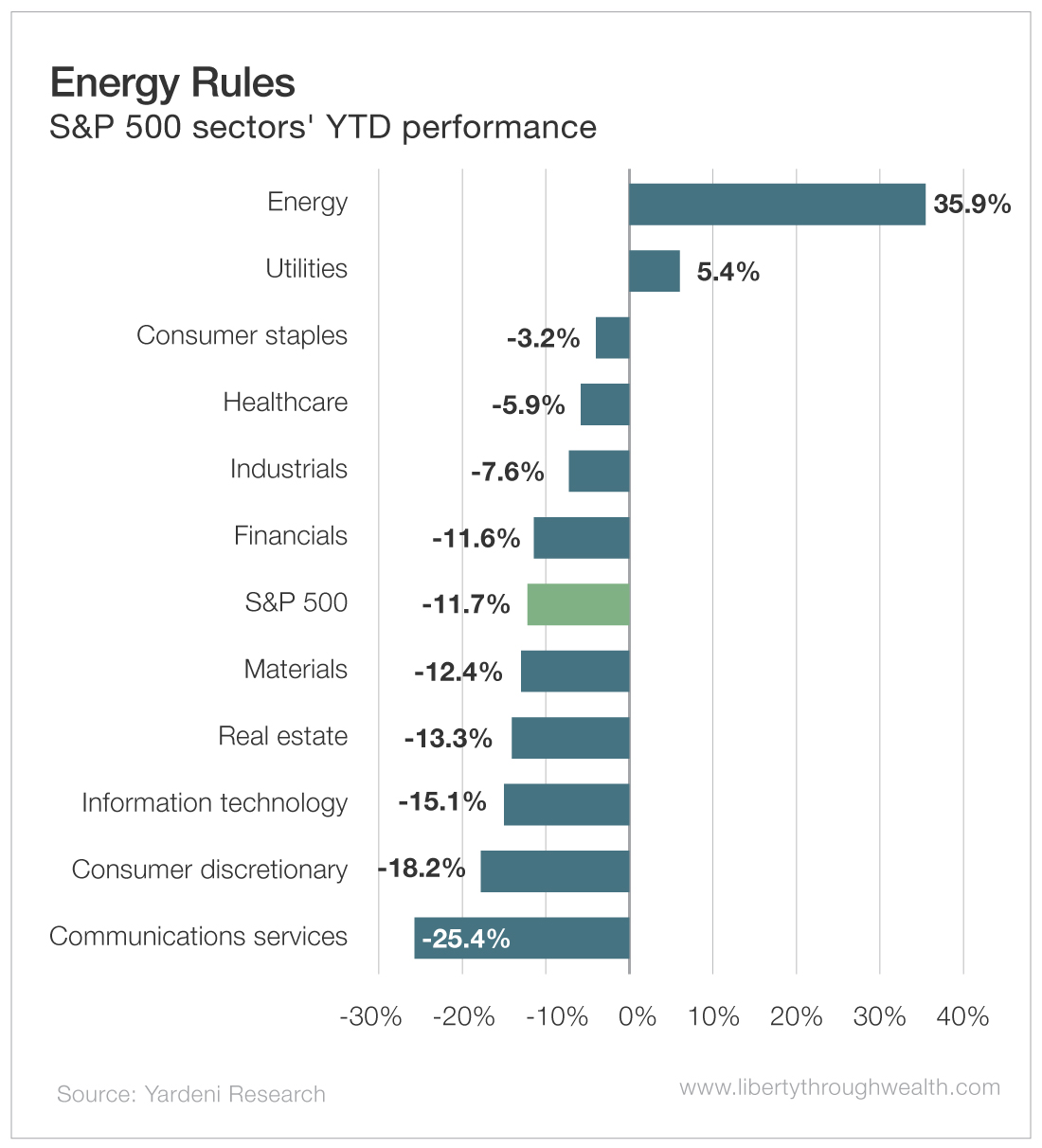 Maybe even more impressive is the financial performance of energy companies (of course, as Alexander Green says, share prices eventually follow earnings, so we shouldn’t be too surprised at this correlation).

So far, earnings growth for the S&P 500 has been relatively solid for the second quarter. But that’s all due to the energy sector, which is reporting earnings growth of 299%, according to FactSet, which tracks earnings.

Strip out energy and you’ve got negative earnings growth for the quarter.

The chart below shows earnings growth for the S&P 500 for both second quarter and calendar year (CY) 2022, with and without the energy sector. 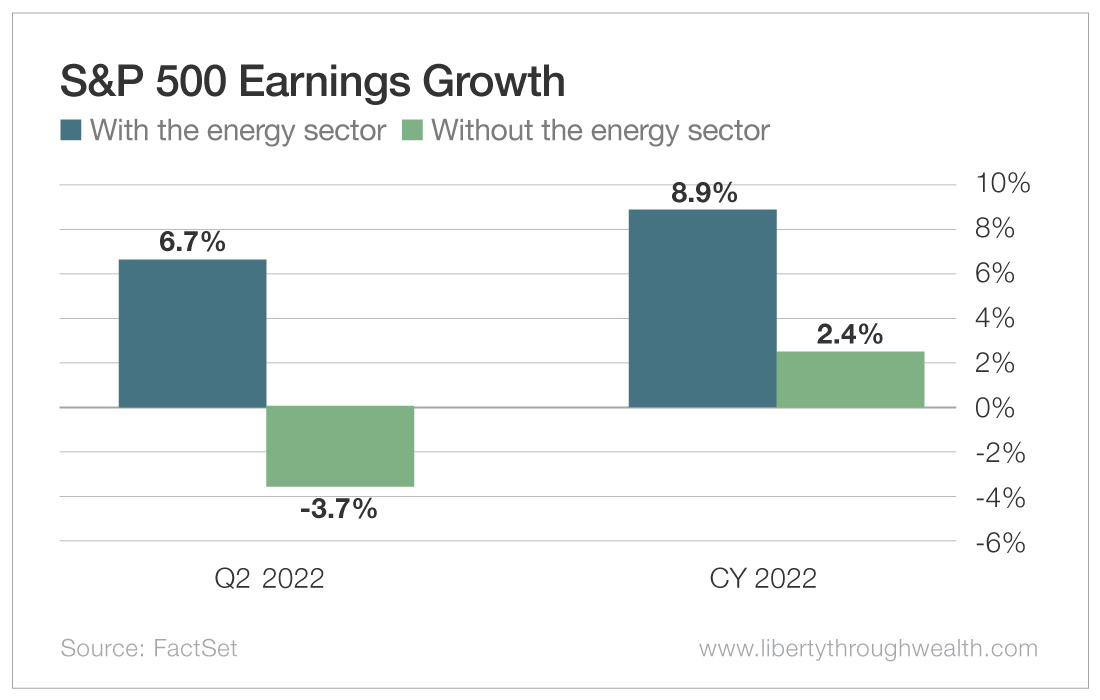 Drill down and you’ll be amazed by the performance of individual companies in the energy sector.

But Can It Last?

The question is, can this boom in energy stocks last? Or will these earnings performances and share prices revert to the mean – joining the rest of the S&P 500 sectors in what has overall been a disappointing year for the stock market?

Put another way, should investors remain in energy stocks, or is it time to take profits and rotate to other sectors or asset classes?

After all, the persistently high price of oil this year is primarily responsible for the robust rise in energy stocks. The price of West Texas Intermediate crude oil is up nearly 28% over the last 52 weeks; the price of Brent crude rose 32%.

Yet since mid-June, the prices of both have been retreating.

You may have noticed this price decline at the pump. The average price of a gallon of gas in the U.S. dropped from about $5 in mid-June to just under $4 today.

And it’s very possible that we recently entered into a recession in the U.S., as evidenced by two quarters of negative GDP growth.

The future for Europe looks bleaker still. While the U.S. is seeing economic growth slow a bit, Europe faces terrible inflation (worse than what the U.S. faces), an energy crisis driven by the unprovoked Russian invasion of Ukraine and its knock-on effects, and political turmoil in several countries, Italy in particular.

Economic contractions in these major energy-consuming regions would push global demand for oil down – and the price of crude oil with it.

Oil prices are notoriously difficult to predict, of course. Like other commodity prices, they depend on the constant push and pull of supply and demand factors.

(Let me recommend to curious readers a fantastic book, The Prize: The Epic Quest for Oil, Money & Power, by Daniel Yergin. It will blow your mind.)

But there are a few developments that may keep energy stocks among the best performers in the market into 2023.

First, the recent decline in crude prices – and the drop in U.S. gasoline prices in particular – was partly driven by the Biden administration’s decision to release massive amounts of oil from the Strategic Petroleum Reserve. That included a release into the oil market of some 730,000 barrels a day beginning in April, increasing to 935,000 barrels a day in June.

Those releases will end in October, taking nearly 1 million barrels of oil a day off the market. So that will happen right before winter – just as demand for oil heats up in Europe, where consumers face a huge reduction in the supply of Russian energy.

Second, the COVID-19 lockdowns in China significantly reduced demand for gasoline and jet fuel there. China is the world’s second-largest consumer of oil (behind the U.S.).

As those lockdowns end and China emerges from the pandemic, oil demand – and demand for energy from all sources, including renewables – will return to pre-pandemic levels. It’s only a matter of time.

Finally, let’s talk about the Inflation Reduction Act. Despite its name, this law will do little to reduce U.S. inflation in the near term.

It will, however, through tax breaks and incentives, give a boost to companies associated with renewable energies. Those firms – also energy stocks in a way – have seen a real boost from the legislation.

A robust supply of energy from all sources is critical to economic development and prosperity going forward.

That means energy and energy-related stocks – gradually moving from fossil fuels to natural gas to renewables – should continue to thrive.