Does the Federal Reserve Have the Time, Luck and Skill to Pull This Off?

Is the Federal Reserve running out of luck?

We should all dearly hope that it isn’t.

Because luck may now be the Fed’s – and our – last hope for exiting this nasty inflationary spiral without dipping further into recession territory.

Let me explain why…

Economist and former Pimco CEO Mohamed El-Erian is one of the wisest observers of monetary policy in the world.

He’s said that in order to engineer the holy grail of central banking – a soft landing that tames inflation without tipping the economy into recession – a central bank needs three things: time, skill and luck.

The Clock Is Ticking

The Fed is just about out of time.

The inflation rate, as measured by the consumer price index, has run far above the Fed’s 2% target for well over a year now. 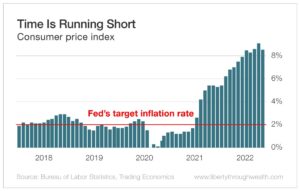 When inflation is elevated for that long, inflation expectations rise as consumers grow accustomed to rapid price increases. In turn, those consumers begin to demand rapid wage increases to cover higher prices. And then businesses raise prices to offset higher labor costs.

When that happens, it can quickly become too late to snuff inflation out with moderate policy measures that don’t sink the economy.

And remember that monetary policy has what’s known as a response lag. That is, it can take 12 to 18 months for the economy and inflation to respond to interest rate hikes.

These measures include raising short-term interest rates, reducing the amount of money in the economy by selling bonds (so called quantitative tightening) and something called “forward guidance.” That last one is a fancy name for the Fed jawboning to reassure consumers, workers and financial markets that it has matters under control.

The Fed seems to be struggling on all of these fronts at the moment.

It started raising interest rates in March, long after inflation had begun to soar. And now it’s behind the ball.

The Fed has also been slow to sell the bonds on its balance sheet. Over the last two months, the Fed’s massive balance sheet has fallen by just $25 billion, though the target was to reduce it by $95 billion.

And the Fed actually increased the amount of mortgage-backed securities it owns by $8 billion last month. (Thanks to my friend Rich Checkan of Asset Strategies International for pointing this out to me.)

Finally, forward guidance. The Fed should be communicating that it knows what’s going on with inflation and has a realistic plan to address it.

Yet what have we heard instead? Ridiculously Pollyannaish comments that have no basis in reality.

Remember Jerome Powell and other Fed officials repeating for months the mantra that inflation would be “transitory,” or short-lived? Well, that was embarrassing.

More recently, Powell suggested we’re near a “neutral” interest rate – i.e., one that neither inflates nor restrains consumer prices.

With inflation still running at the highest level in decades, that can’t possibly be true.

(Note: The U.S. Bureau of Labor Statistics reported this morning that consumer prices in July were 8.5% higher than they were a year ago. That’s lower than the figure from June but still far above where the Fed wants inflation to be.)

Last week, economist and former Treasury Secretary Larry Summers called Powell’s statements on rates “analytically indefensible.” Summers, by the way, is no Fox News personality. He’s a Democrat and a friend to the Biden administration.

But Powell’s comments were too much for even him.

So it’s becoming clear that this particular Federal Reserve may lack the skills needed to tame inflation and nail that soft landing.

No time left. And little skill.

By the way, the recently passed Inflation Reduction Act will do little to tame inflation in the near term. Sure, the new law includes several anti-inflation provisions, such as…

But while the law could reduce prices and inflation over the longer term, it will provide little aid to Powell and company in the current inflationary cycle.

That leaves us with nothing to hang our hopes on but luck.

But I wouldn’t bet on it.

How to Defend Capitalism at Cocktail Parties

Who Is Benefiting From This Economy?

The Most Divisive Election in American History