Is the Fed Making a Mistake With Aggressive Rate Hikes?

Is the Federal Reserve going too far, too fast?

It may be, with real consequences for both the labor market and the stock market.

In an interview on CNBC yesterday, Chicago Federal Reserve President Charles Evans suggested that the Fed’s aggressive rate increases may be a bit reckless.

In response to a question about how the economy reacts to interest rate hikes with a time lag (those lags are thought to be at least nine months and sometimes twice that long), Evans said he was definitely worried.

“I am a little nervous about exactly that,” Evans said. “There are lags in monetary policy, and we have moved expeditiously.”

“Expeditiously” is an understatement if you ask me.

Just look at the pace of interest rate hikes by the Fed this tightening cycle compared with those of past cycles. 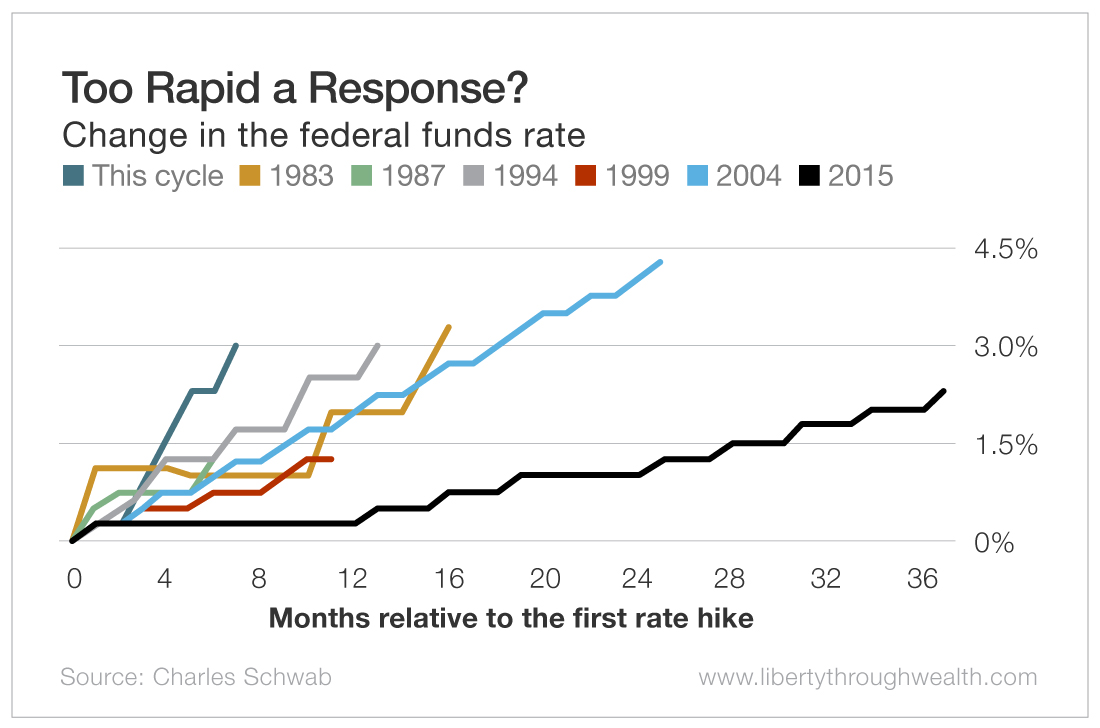 The Fed has raised rates six times since February, taking the federal funds rate from zero to a range of 3.0% to 3.25% in just seven months. That’s a much more rapid pace than in other recent tightening cycles.

And the Fed is expected to hike its target rate at least three more times by February of next year, pushing it to 4.75%.

By the time all those rate hikes take effect – possibly in 2024 – inflation may have come down significantly and the unemployment rate may have soared, with hundreds of thousands of jobs lost.

And the stock market may continue to move sideways as it waits for the tightening to end.

Meanwhile, the effect of the many rate hikes will still be in the pipeline.

Evans mentioned that too. “You’re not leaving much time to sort of look at each monthly release.”

A Case for Humility

There’s usually a 20- or 30-second lag between the time you turn the faucet and the time the water temperature changes. So you inevitably find yourself losing patience and turning the faucet too hot, too quickly, and then screaming in pain when the scalding water finally arrives.

Summers was hardly the first economist to have this concern. Renowned economist and Nobel Prize winner Milton Friedman warned about the problem of policy lags back in 1960 (he was very much ahead of his time).

Research Friedman did with economist Anna Schwartz found that changing the money supply (which is what the Fed essentially does) has its peak impact on the economy between four and 22 months later!

As a result, Friedman called for a good dose of humility when it comes to the central bank trying to steer the economy with any degree of precision…

“In the present state of our knowledge [of monetary policy and the economy] we cannot hope to use monetary policy as a precision instrument…” he told a congressional committee in 1959. “The attempt to do so is likely merely to introduce additional instability into the economy, to make the economy less rather than more stable.”

Why This “Dirty Word” Deserves a Place in Your Portfolio

Is American Freedom in Jeopardy?