“Bull markets never die of old age; they are murdered.”

“Government is like fire, a dangerous servant and a fearful master.”

Monday was Presidents Day, and given the current political climate, there is a great deal of fear that socialist Democrats will be taking over next year.

According to the latest election betting odds, Sen. Bernie Sanders now has a good chance of becoming the Democratic candidate to run against President Donald Trump. He is substantially ahead of the second-place runner, former New York Mayor Michael Bloomberg.

The latest odds, updated every hour by John Stossel and Maxim Lott, show a 46% chance (and rising) that Sanders will be the Democratic candidate for president. Bloomberg’s odds are at 16% and falling.

But the voting odds are as volatile as a penny stock, so things can change quickly. Just six months ago, Sen. Elizabeth Warren was in the lead. Her odds of winning the primary are now below 4%.

(The most up-to-date betting data can be found here.)

Sanders won the New Hampshire primary last Tuesday and is neck and neck with Pete Buttigieg in the Iowa caucus, which is still being challenged. Candidates Joe Biden and Warren are fading fast.

For the first time in American history, a hard-core self-proclaimed socialist could become president of the United States. That’s scary.

The idea of American exceptionalism – along with your wealth and way of life – is under threat as never before.

Of course, the Democrats are famous for selecting candidates who have no chance of winning – for example, George McGovern in 1972 and Michael Dukakis in 1988.

Trump would win reelection handily if the election were based solely on how well the economy and the stock market are doing. Yet his approval rating has never gone above 50%.

Professor Allan Lichtman, author of The Keys to the White House: A Surefire Guide to Predicting the Next President, is one of our keynote speakers at FreedomFest in July. He has accurately forecast the winner in every election from Reagan to Trump. At the time of this writing, he says that, despite a booming economy under Trump, “The election is too close to call.”

Bloomberg is in the pocket of the unions, favoring a $15 minimum wage and an end to state right-to-work laws.

Bloomberg also wants to impose a financial transaction tax on all purchases and sales of stocks, starting at 0.1% – I’m sure he will do it by executive order.

He justifies the new tax by saying…

The stock market is at an all-time high, but almost all of the gains are going to a small number of people, and our economy is still vulnerable to another shock like the 2008 financial crisis that devastated families and communities all over the country.

Really? He’s dead wrong when he says that a “small number of people” are enjoying the benefits of a booming stock market. Today more than 56% of Americans own U.S. stocks. 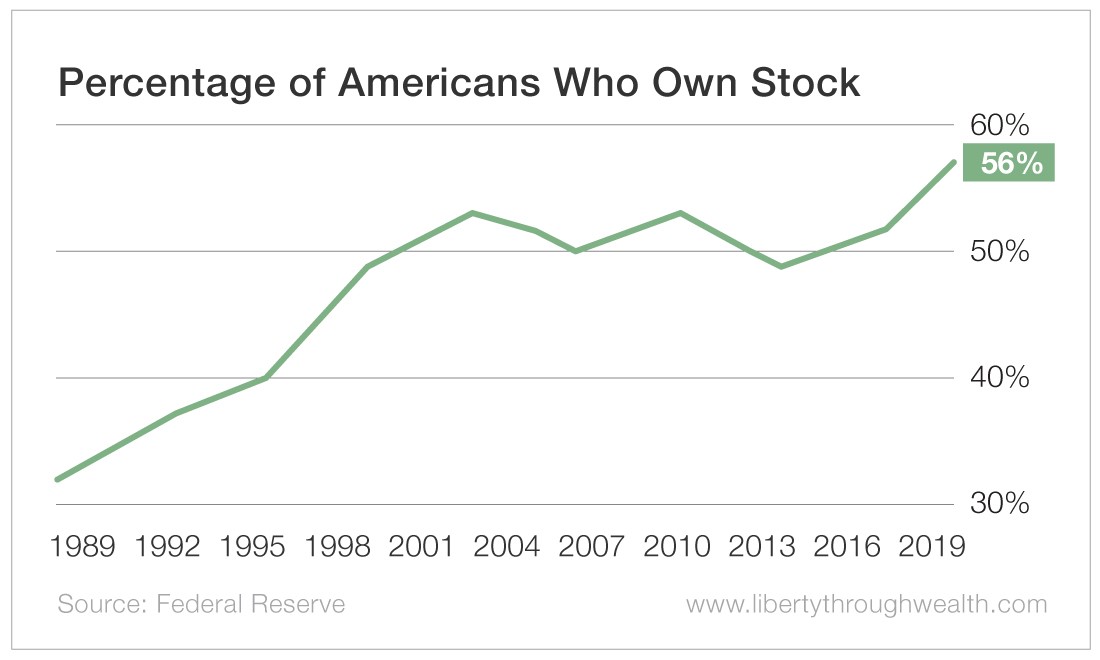 In addition, two-thirds of the stock market is owned by institutional investors, including pension funds that invest on behalf of working people.

A small transaction tax may not seem like much, but it could devastate liquidity in the marketplace. It will discourage high-frequency traders and speculators who provide the liquidity for long-term investors to buy or sell at good prices.

Bloomberg’s policy paper on the financial transaction tax notes that the United Kingdom and Hong Kong have a small stock transaction tax that has not hurt their markets much.

But there’s no free lunch, and the New York Stock Exchange and Nasdaq are the two biggest markets in the world.

Once the government sees how much money it can make with a small tax on stock transactions, it will become greedy and demand more.

Bloomberg, who has a background in finance, should know better.

No matter who wins in November, one investment area is likely to benefit: infrastructure investing. Both Democrats and Republicans favor financing and improving our roads, bridges, airports, electrical grid and other forms of infrastructure.

My favorite way to play the infrastructure boom is Brookfield Asset Management (NYSE: BAM), an international firm based in Toronto. It’s on fire.

(If you want to receive all of my latest recommendations, be sure to click here.)

The Connection Between Self-Compassion… and Investment Success