What’s going on with the stock market?

It reached a new bottom on October 12 and has been climbing higher since, albeit in fits and starts.

That’s a handsome gain in a matter of four weeks. And it raises two important questions for investors…

What’s fueling this recent stock rally? And will it last?

I have three theories. They involve politics, earnings and the Federal Reserve. Most likely, the recent market bounce is a product of all three.

All Eyes on Politics

As I wrote two weeks ago, midterm elections tend to have a positive impact on the stock market.

Throughout market history, many bear markets have occurred in midterm election years. And they have often bottomed in October, just prior to the election.

That trend seems to be holding this year… so far, at least.

Since 1934, the market has seen an average gain of 2.8% in the eight trading days surrounding each midterm election. Interestingly, the S&P 500 is up about 3.3% since last Thursday and seems to have some momentum.

Of course, every election is unique, and each comes at a different point in the business cycle.

But there is a concrete reason this election could have a lasting positive impact on stock prices.

It appears that yesterday’s elections will end the Democrats’ single-party rule. And that will put the kibosh on any new spending programs from the Biden White House or Democrats in Congress.

Many economists say too much federal spending during the COVID-19 pandemic is a major reason inflation got out of control. So a divided government that is almost certain to spend less portends less inflation. That should push down bond yields (because bond prices rise and yields fall when inflation diminishes), and that will help keep this bear market rally going.

The second reason this rally could continue is corporate earnings… and the nature of expectations.

As we all know, much of our happiness is dependent on reality outperforming our expectations.

Third quarter earnings growth slowed significantly. The growth rate currently sits at about 2.2%, compared with 6.2% last quarter and a whopping 40% a year ago. 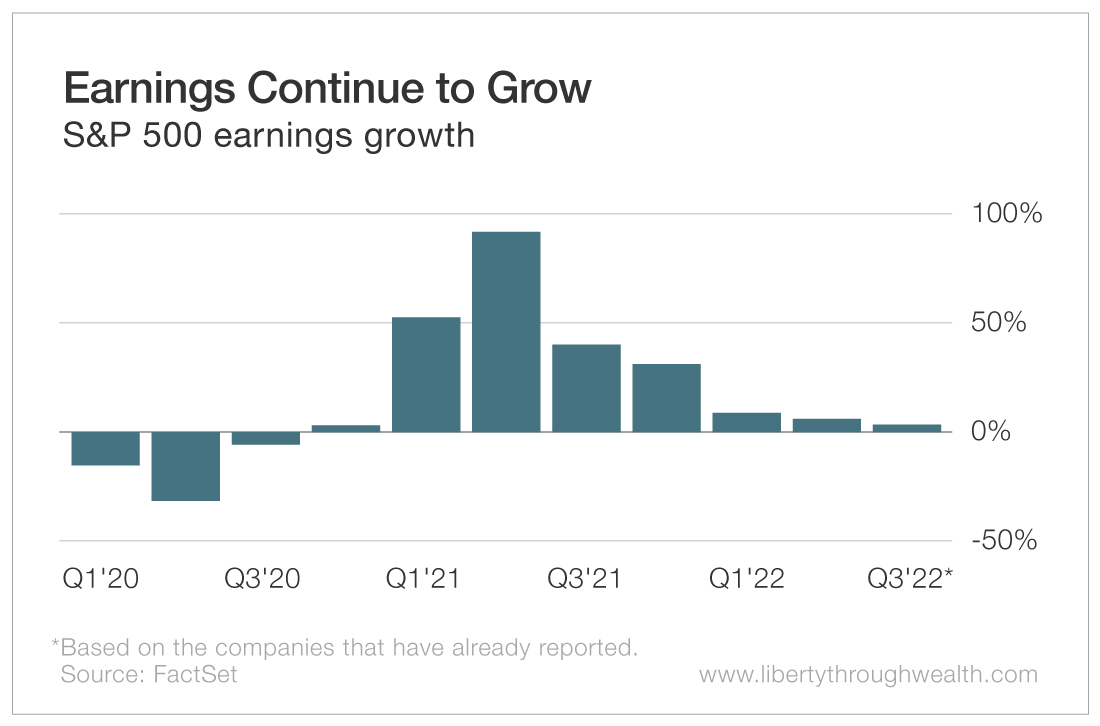 The thing is, many investors and market analysts expected an earnings crash in the third quarter. Instead, we’re getting just an earnings slowdown.

In other words, earnings growth has still been positive. Reality has bested expectations, and that has added to recent stock market happiness.

Rising wages are a huge component of inflation. They push companies to raise prices, which drives workers to demand even higher wages, and suddenly we’re in an inflation death spiral.

Yet last week’s data on wages showed that hourly earnings growth may be moderating. On a three-month rolling basis, wage gains were down in October, a hugely welcome sign that inflation may have peaked and is starting to come back to earth.

Of course, Federal Reserve Chairman Jerome Powell said in last week’s press conference (which followed the announcement of another jumbo interest rate hike) that the chances of a soft landing for the economy have narrowed.

But keep in mind that he has to say that. Powell is doing everything in his power to keep the stock market in check until inflation shows real signs of abating. That’s because a rising stock market adds to inflation – it makes investors feel wealthier, so they go out and spend, reheating demand and inflation.

One disappointment in last week’s jobs report was the labor force participation rate. This is the percentage of Americans 16 or older who are not institutionalized and are working or actively looking for work.

That percentage plummeted at the beginning of the pandemic and has been recovering since. But not quickly enough. It ticked down a notch in October, to 62.2%, and remains well below the 63.4% pre-pandemic level. See the St. Louis Fed’s graph of it here.

Until more people join the workforce, companies will need to pay more to attract labor, and supply constraints will remain in place. Both of these things will keep inflation elevated.

So here’s my advice…

Watch the labor force participation rate closely going forward. Because I have a sense the Fed will be doing so. When it begins to (hopefully) rise again, the Fed will think about pausing, and the market will finally be able to transform from a bear into a bull.

A Simple Tool for Managing Emotions

Are Stocks in a Bear Market? Yes… and...