Despite the significant rally we’ve seen over the last few weeks, most sectors of the market – with the exception of energy – are still down sharply for the year.

Some equity classes have fared worse than others.

Yet one class, in particular, is likely to seriously outperform in the year ahead.

It offers the best opportunities in the market right now, in my view.

Let’s start with a bit of background…

In other words, the whole process reverses.

Microcaps are the most volatile class of stocks. They are also the most profitable in a rising market.

As you can see in the chart below, microcaps outperform everything else over the long haul. 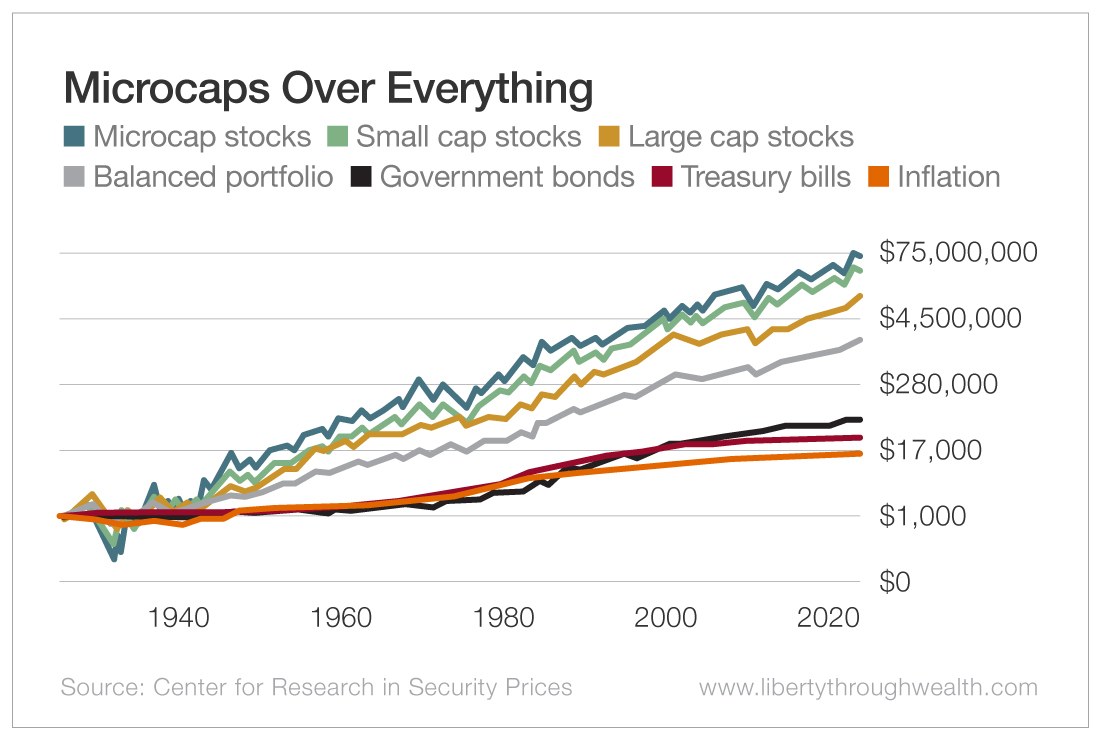 The trade-off for this $55 million in outperformance is – you guessed it – greater volatility.

This is especially true of those microcap companies that are not yet profitable.

But pre-profit is not the same as pre-revenue.

I have never recommended a microcap that doesn’t already have substantial sales growth.

Those microcap firms that have not yet turned the corner on profitability saw their shares suffer the most in 2022.

Companies that are unable to support their growth with their own cash flows must tap stock and bond markets periodically to raise fresh capital.

But interest rates are a lot higher than they were at the beginning of the year.

And it’s harder to complete a secondary stock offering in a down market.

Here’s an example. Let’s say a company has 5 million shares outstanding at $20 a share… or a market cap of $100 million.

If the company needs to raise $20 million, it can issue 1 million new shares at $20. That would dilute existing shareholders by 20%, since there would then be 6 million shares outstanding instead of 5 million.

But look what happens if the share price declines to $5. To raise $20 million, it now must issue 4 million new shares.

That would take the total number of shares outstanding to 9 million, a far greater dilution.

That’s a big reason why small, unprofitable companies get such a haircut in a down market.

For starters, this reality is already reflected in share prices. It’s a big reason why microcap stocks are down so much.

It’s also important to remember that many of the market’s biggest gainers over the past few decades – companies like Amazon (Nasdaq: AMZN), Tesla (Nasdaq: TSLA) and Netflix (Nasdaq: NFLX) – saw their biggest gains before they ever earned their first dollar.

And so they bid the shares up in anticipation of big profits down the road.

I expect the same thing to happen in 2023, as microcaps with double- and triple-digit sales growth – but no profits yet – bounce back in a big way and turn in a bravura performance.

Unfortunately, most equity investors have a strong tendency to believe that what they should have done in the past is what they ought to do now.

In other words, if large cap value stocks held up best in 2022, that’s where they believe they should put fresh money to work for 2023.

Large caps and midcaps should do fine next year. But not nearly as well as microcaps.

That’s why it makes sense to position yourself for the turnaround that lies ahead.

And please excuse me when I say “I told you so” this time next year.

Are You Spending Too Much Time Making Decisions?

These Stocks Warrant Your Attention

This Company Crushed Expectations… and Handed Us a...

Navigating the World of Investing Through ETFs

Three Investing Rules to Live By

Strategies That Have Beaten the Market for More...