Tens of thousands of Berkshire Hathaway (NYSE: BRK-B) investors gathered this past weekend in Omaha, Nebraska, for this year’s annual meeting – dubbed the “Woodstock of Capitalism.”

All the praise heaped upon Warren Buffett and his partner Charlie Munger could not hide the unpleasant truth: Berkshire is enduring the worst stretch of its illustrious history. 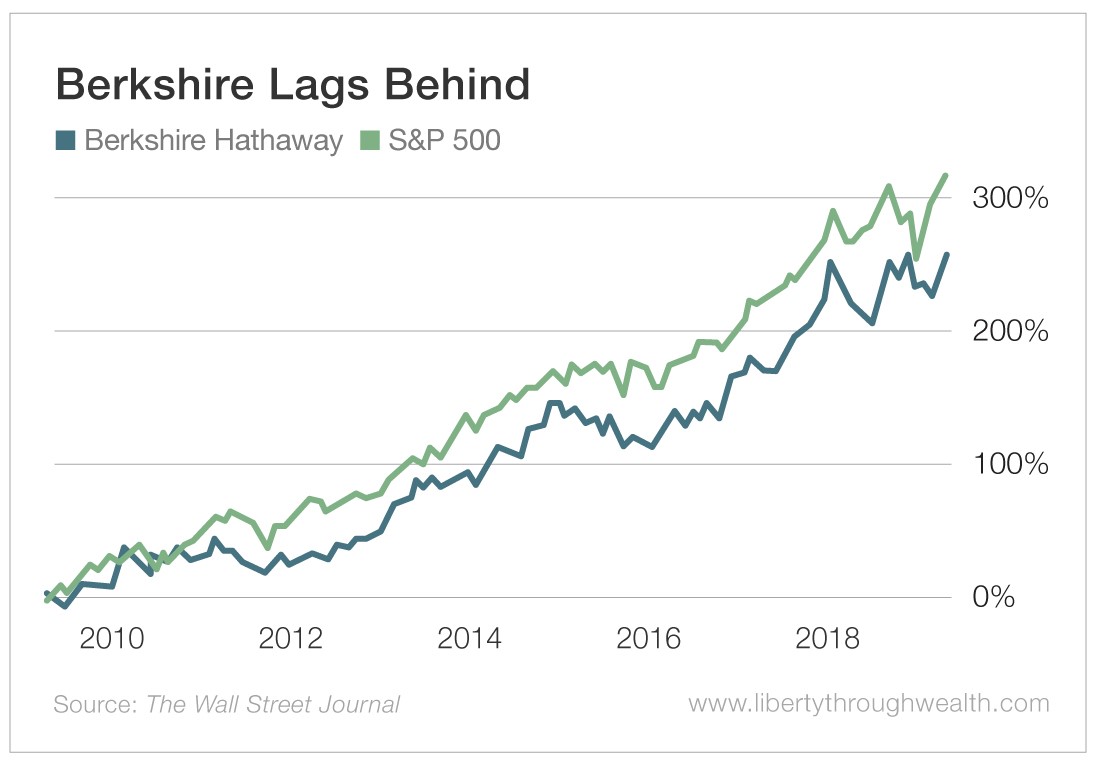 So far, 2019 has not been kind to Berkshire either.

Shares are up 7.1% this year, while the S&P 500 Index has risen nearly 18%. Berkshire is by far the worst performer in my investment portfolio over the past few years.

As a longtime Berkshire shareholder, I am disappointed. On the one hand, I respect the company’s long-term track record. On the other, it’s hard to ignore an entire decade of lagging the market.

But I am not willing to throw in the towel on Berkshire just yet. Let me explain…

Berkshire’s lagging performance has put Buffett on the defensive. It has also caused him to quietly reassess his investment strategy.

I see this in two critical ways.

First, Buffett is gradually shifting his investments to include technology.

Traditionally, Berkshire’s investment style favored cheap but financially stable companies. This approach kept Berkshire out of technology stocks for most of its investment lifetime.

As I’ve discussed, Buffett started to change this with his first investment in Apple (Nasdaq: AAPL) in 2016. Today, Apple is Berkshire’s biggest single position.

At this past weekend’s annual meeting, Buffett revealed that Berkshire had also invested in Amazon (Nasdaq: AMZN).

This new focus on technology represents an evolution in Berkshire’s thinking.

To be clear, investing in Amazon wasn’t Buffett’s personal decision. Instead, it was one of his portfolio managers – either Ted Weschler or Todd Combs – who made the investment. We won’t know until later this month how significant that investment was.

Amazon’s famously high valuation left many Buffett fans scratching their heads, trying to understand how buying Amazon fits into Berkshire’s portfolio. After all, one of Buffett’s tenets is “to be fearful when others are greedy and greedy when others are fearful.”

The purchase of Amazon ignores that advice. As one analyst pointed out…

Amazon has 45 analysts that cover the stock: 45 buys, zero neutrals, zero sells… How is buying the most popular stock on the planet being greedy when others are fearful?

Second, Buffett has changed his philosophy on stock buybacks.

After rejecting the strategy for much of its history, Buffett now says Berkshire would be willing to spend $100 billion buying back its own stock. Berkshire did buy back $1.7 billion in stock in the first three months of the year – a small amount.

Nevertheless, the bulk of Berkshire’s $114 billion cash pile remains in short-term Treasurys. This is a high-quality problem. Berkshire has plenty of cash, but Buffett is struggling to spend it.

As Buffett put it, “It’s very, very, very hard to make deals in a world where you’ve got $1 trillion-plus of money, plus just the normal animal spirits of corporate leaders and everything else, and accessibility to extraordinarily cheap money.”

Betting on Stability or Change?

Older readers may recall that this is not the first time Buffett has struggled. The late 1990s were also a time when Berkshire’s performance lagged the S&P 500 – only to recover after the dot-com bust.

This highlights the greatest strength – and weakness – of Buffett’s approach.

Much of Berkshire’s success has been based on a single idea: that most things don’t change. Berkshire bet on millions of consumers continuing to use Gillette razors, drink Coca-Cola, and consume Kraft macaroni and cheese – as they have for decades.

This approach, however, misses that today millions also use Apple iPhones, search the internet with Google and order from Amazon. Each of these developments is only 10 or 15 years old. And in many ways, Google and Amazon have become more important than Coca-Cola and Heinz ketchup.

As Buffett said of passing up the chance to buy Google earlier, “We just sat there sucking our thumbs.”

If Berkshire’s performance does rebound, it will be for a reason that has nothing to do with textbook finance. It will be thanks to Mr. Market’s mood swings.

And when they are, and money is short, Buffett says Berkshire will be ready to swoop in with investments of $10 billion to $30 billion.

In short, Berkshire will thrive precisely when the rest of the world is licking their wounds.

That’s why I am sticking with my bet on Berkshire.