Last year, the two hottest markets – cryptocurrencies and marijuana stocks – took the pros by surprise. Both had gone through treacherous bear markets but suddenly came alive in 2017. 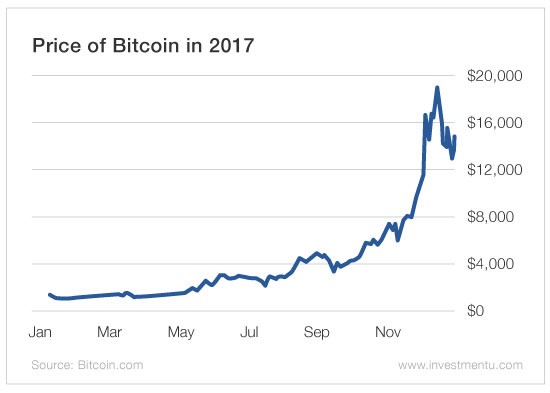 It was easy to play this market through Bitcoin Investment Trust (OTC: GBTC), a closed-end fund that invests in bitcoin.

Even though it was selling for a substantial premium over its net asset value, I recommended it several times in my trading services… once even doubling our money in four days.

Now that’s what I call a fast market.

Other digital currencies rose even faster, including Ethereum and Ripple.

Although it was harder to play cryptos because you had to open an account outside of the stock market, thousands of investors did anyway…

Talk about a mania.

Cannabis stocks also took off last year… but not until a bit later.

The Canadian Marijuana Index skyrocketed in November, sending some stocks up 200% or more. 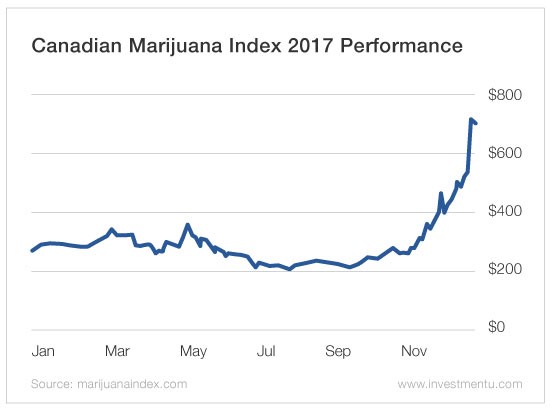 Aphria (OTC: APHQF), one of my favorites, tripled in price from $6 to nearly $18 in the past few months.

As we enter 2018, both of these hot markets are going through a major correction… with prices falling by double digits daily.

So naturally, investors are starting to ask…Is this simply a bull market correction or the end of a speculative bubble that will end badly?

When a market can’t surpass its previous high, it’s a sign it’s likely to decline.

Both markets are also facing more government scrutiny and regulation.

The U.S. Securities and Exchange Commission has discouraged investment banks from creating ETFs in cryptocurrencies, and the IRS is auditing bitcoin investors for possible tax evasion.

South Korea banned trading in bitcoin even though Japan made it legal tender.

In the case of marijuana, Attorney General Jeff Sessions reversed the Obama administration’s decision not to enforce federal laws against marijuana use in states that have legalized pot.

That could create a confrontation between the federal government and the states.

The internet is a legitimate technological innovation, but investors got caught up in the irrational exuberance that sent stocks to speculative bubble territory.

Although the boom turned into a bust, when the dust settled, the economy benefited from an exciting new invention that is paying off big-time.

By the same token, cryptocurrencies offer a legitimate alternative payment system – and the underlying blockchain technology has vast usefulness.

JPMorgan Chase CEO Jamie Dimon reversed course after initially calling bitcoin a “fraud” – wisely noting that the blockchain ledger can be applied to all kinds of financial management.

As for cannabis, its use is now legal in Mexico and Canada… and is gradually becoming legal in the United States.

Too many states are experiencing large tax revenues from its sale – and the federal government won’t be able to stop it. Instead, it will be forced to tax and regulate the industry.

The future of the billion-dollar marijuana trade is bright, and there’s still plenty of room for the nimble investor to make a profit.

P.S. Next Monday, I begin my popular Financial Economics class at Chapman University in Orange, California, where I will talk about my own investment strategies and highlight the contributions of great financial economists such as Robert Shiller, Jeremy Siegel, Eugene Fama, Rob Arnott and others. It takes place Mondays and Wednesdays, 5:30-6:45 p.m. If you would like to sit in on a few sessions, contact me at mskousen@chapman.edu and I will provide the details.

How My 2023 Predictions Are Playing Out