Is the Public Company on the Verge of Extinction?

In the absence of any of these elements, capitalism would fail.

But there’s another critical element of modern capitalism that gets short shrift.

It’s what is responsible for Warren Buffett’s fortune…

And it’s what motivates tens of thousands of entrepreneurs in Silicon Valley (and elsewhere) to disrupt established markets and change the world.

So what is this crucial element?

Turns out it’s a tedious but critical legal construct: the publicly traded company.

I believe that the public company is responsible for most of the world-beating successes of America’s high-tech economy. (The internet, the GPS and nuclear weapons are three notable exceptions.)

I expect public companies to maintain their crucial role in ensuring America’s high-tech leadership in the coming decades.

Bear with me as I make my case…

The public company is a crucial vehicle for motivating entrepreneurs.

All entrepreneurs, as Steve Jobs put it, want to “Put a dent in the universe.”

But they also want to get rich doing it.

“Going public” – that is, listing their company shares on a stock exchange – allows them to do just that.

But successful public companies do more than just make their founders rich.

In contrast, privately owned or, worse, state-owned enterprises operate in a fog of secrecy.

As Supreme Court Justice Louis Brandeis once famously wrote, “Sunlight is said to be the best of disinfectants.”

Thanks to the innovations of high-tech public companies…

You can partake in the success of Jeff Bezos’ Amazon (Nasdaq: AMZN) and Warren Buffett’s Berkshire Hathaway (NYSE: BRK-B) at the click of a mouse.

Why the Decline of Public Companies Is Bunk

Many observers paint a gloomier picture.

Predictions about the coming demise of public companies have become almost conventional wisdom.

A single compelling statistic supports this view: The total number of public companies listed on U.S. exchanges is falling. 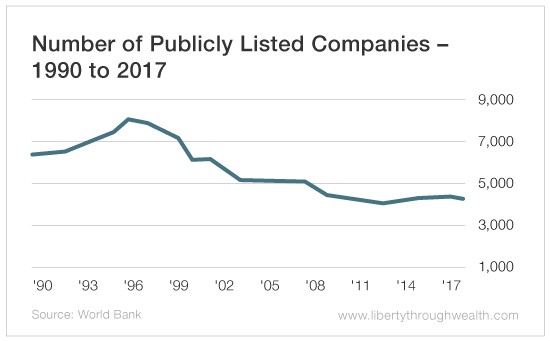 The most popular narrative is that the world’s most innovative companies today view going public as a necessary evil to be postponed as long as possible.

Airbnb is a decade old but has remained unlisted.

Other “unicorns” – startup companies valued at $1 billion or more – have also held off from listing their shares.

The most frequently stated reason?

I believe there are two other equally important reasons you’re seeing fewer IPOs.

First, companies don’t need to raise capital from “mom and pop” – whether directly by issuing shares or indirectly through mutual funds.

Second, unlike in the 1990s, these sophisticated investors can structure deals that allow entrepreneurs to get rich without having to go public.

Entrepreneurs are able to sell their companies’ shares in private markets without the hassles of regulators looking over their shoulders.

Still, reports of the death of the public company are exaggerated. It’s just that the business environment has changed.

The median age of companies going public on American stock markets is 50% higher now than it was 20 years ago.

Today, companies are staying private for longer… but not forever.

Startups that don’t go public still often end up in the stock market, if only indirectly.

Many of them are gobbled up by the big five tech giants: Alphabet (parent company of Google), Amazon, Apple, Facebook and Microsoft.

Public companies have been central to the success of the high-tech American economy and have consistently been on the cutting edge of innovation.

Whether it was the railroads of the 19th century, the automobiles of the 20th or the smartphones of the 21st…

The public company has long been the low-profile locomotive of American capitalism.

And that’s a role it won’t relinquish anytime soon.

Dividends: Not Life’s Greatest Joy (but Great for a Worry-Free Retirement)