“What a bloody frustrating year it’s been!” chortled an acquaintance portfolio manager of mine at a recent reception for London investment bigwigs.

He manages an extensive portfolio of U.S. stocks…

And the constant ups and downs of the U.S. stock market were clearly taking their toll.

After downing his second glass of Italian Barolo under the warm English summer sun, he asked me, “2017 was so easy! But how the bloody hell can anyone make money consistently in the U.S. markets in 2018, Nick?”

“You can make money,” I replied calmly. “You just need to know where to look.”

It involves one of my favorite big-picture themes in the U.S. stock market – a theme I expect to end 2018 with the same 20% gains the S&P 500 Index delivered last year.

Why am I so confident about this?

In part, it’s because we’re already halfway there.

Yes, the S&P 500 has recovered somewhat since the January sell-off.

Still, it has eked out only an anemic 1.9% return year to date.

In contrast, another U.S. stock index has just broken out to new record highs. 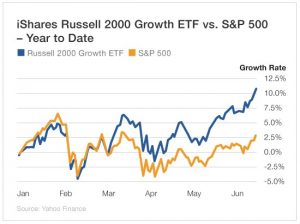 The small cap effect is the observation that small cap stocks consistently outperform large cap stocks over the long run.

Eugene Fama and his colleague Ken French famously put this theory to the test.

Though they did so at the cost of higher volatility.

Some argue that investors have less information about small caps.

After all, Wall Street mostly sticks to covering large caps.

Others say small companies are just nimbler. They move like speedboats, while large companies trudge along like oil tankers.

Today’s big winners were all small cap stocks at one point.

Apple’s market cap was just over $1 billion when it went public in 1980; Microsoft’s stood at a lowly $780 million.

After all, small caps can underperform for decades, making them a difficult asset class to hold on to.

However, I’m also a big believer in taking what the market gives you.

You have to recognize when some strategies work – and when they don’t.

First, the U.S. economy is growing faster than many of its global rivals. The Atlanta Fed estimates that Q2 economic growth in the U.S. will hit 4.1%. If growth continues at this rate, I expect small caps will rally even further.

Third, small caps get only about 20% of their revenues from overseas. That means small caps are more insulated from the geopolitical concerns and trade jitters that weigh on large caps. They also tend to thrive when the dollar is strong, which it is now.

My favorite way to profit from soaring small cap U.S. stocks is through the iShares Russell 2000 Growth ETF (NYSE: IWO).

So why do I prefer the Russell 2000 Growth ETF over its rivals?

And growth strategies tend to outperform value strategies during times like this as well.

Let me leave you with this takeaway…

If you invest only in small cap stocks, you will outperform the S&P 500 over the long term.

The downside of this “one size fits all” strategy is that there are long stretches of time when small caps underperform.

But in bullish years, small cap stocks can shoot the lights out.

The combination of strong economic growth with tax and regulatory reform makes this a good time to bet big on small cap growth stocks.

All investment strategies have their seasons.

I recommend you make hay while the sun still shines.

The Most Compelling Signal You Can Find