Editor’s Note: As Nicholas Vardy explains in today’s article, one of the world’s most influential economists paved his way to financial fame by investing in the real world – and you can too…

By identifying great companies with breakthrough technologies like the little-known company Alexander Green discovered (it only recently went public).

According to Alex, THIS is the most important tech prediction of his 37-year career.

Not only does this company have 812 patents and pending applications protecting its intellectual property, but it just locked in a new deal with a major international distributor that provides access to 2 BILLION new customers.

Go here to learn why Alex is calling this affordable stock an “ideal investment.”

Ask 10 economists a question, and you’ll get 20 different opinions.

Yet if there is one statement all economists agree on, it’s that John Maynard Keynes was the most influential economist of the 20th century.

Keynes’ 1936 magnum opus, The General Theory of Employment, Interest, and Money, laid the foundation of the philosophy that dominates the profession of economics to this day.

Indeed, the term “Keynesian” has become synonymous with government stimulus and debt financing.

Yet few economists realize that Keynes was also his era’s leading investor.

And his experiences and investment philosophy offer valuable insights for investors today.

The 20th century’s most influential economist actively participated in the daily ups and downs of financial markets.

Keynes was a gung-ho financial speculator early in his career. As a young man, he made and lost fortunes betting on highly leveraged commodity and currency futures.

He famously made his trading decisions each morning while still in bed. He read the morning newspapers before placing trades. Brokers reported to him by phone.

During the Roaring ’20s, Keynes was as caught up in the fervor of the market as anyone.

Upon meeting with Swiss banker Felix Somary in 1926, Keynes declared, “We will not have any more crashes in our time.”

Keynes was overconfident about his abilities as a speculator. He remained stubbornly bullish on stocks and commodities during the market crash of 1929.

The result? He lost over three-quarters of his net worth thanks to poorly timed bets.

By the end, Keynes was all but wiped out.

The Evolution of Keynes’ Investment Philosophy

Keynes started as a pure speculator, betting on big movements in commodities and currencies.

Yet he ended up as a value investor of the most stubborn kind.

This shift occurred in the early 1930s, following the massive losses in his portfolio.

Keynes changed his philosophy, buying out-of-favor stocks and holding on to them for years.

He ignored the advice that you should never put all your eggs in one basket.

In 1931, for example, Austin Motor Company and British Leyland represented two-thirds of his holdings.

Keynes said that knowing all about your securities was the best way to avoid risk in the first place.

As Keynes put it…

I am quite incapable of having adequate knowledge of more than a very limited range of investments. Time and opportunity do not allow more.

Keynes had to remain calm and cool enough to roll with the market fluctuations and not panic during market sell-offs.

In short, Keynes morphed from a George Soros-style speculator into a Benjamin Graham-style value investor.

But the first edition of this value investors’ bible was published in 1934, right around the time of Keynes’ conversion to value investing.

And Keynes’ description of his investment principles in 1938 closely echoes the language of value investing.

He described his investment principles as…

So how good of an investor was Keynes?

Our best insight comes from his track record with the Chest Fund, which he ran as bursar of King’s College, Cambridge. 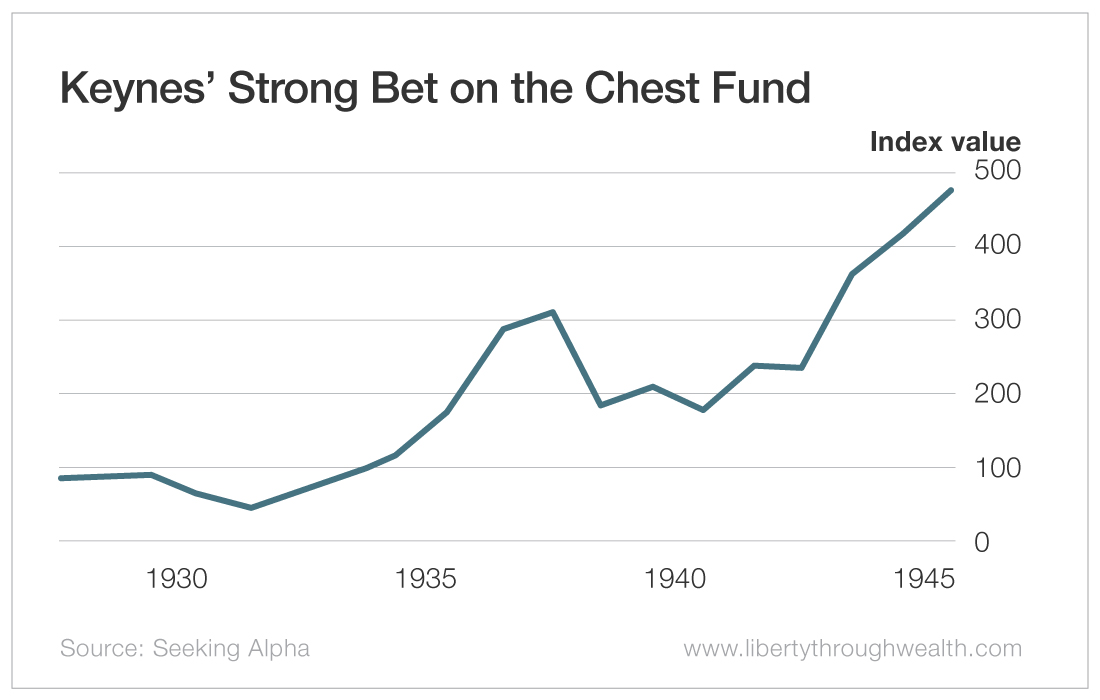 Far superior to the track record of most money managers at the time.

Keynes’ returns were all the more impressive when you consider…

Keynes always viewed himself as the smartest guy in the room.

Yet his massive losses as a speculator left a deep psychological scar.

And he resented the speculators who nearly put him in the poorhouse.

Throughout General Theory, Keynes complained of the irrational short-term animal spirits of speculators.

They would dump stocks during crises due to “waves of irrational psychology.”

In the end, Keynes concluded that the stock market was merely a casino or a game of chance.

My central principle of investment is to go contrary to general opinion, on the ground that, if everyone is agreed about its merits, the investment is inevitably too dear and therefore unattractive.

If that sounds familiar, it’s because it’s a philosophy that echoes what you hear in Warren Buffett’s thinking.

Love him or hate him, Keynes was highly unusual for one reason.

There have been many economists who have been important to economic theory.

But few could make money investing in the real world.

John Maynard Keynes was the one exception.

The Smart Approach to a Bear Market