Name the most famous economist of the 20th century.

British economist John Maynard Keynes may be the first name that comes to mind.

My colleague and Liberty Through Wealth advisory panelist Mark Skousen – no great fan of Keynes – named Keynes one of the three most influential economists in history in his 2007 book The Big Three in Economics.

That’s because “Keynesian economics” has become synonymous with using government spending to manage the ups and downs of the economy.

What you may not know is that Keynes was more than just an ivory tower academic.

He was also a very successful investor.

Over a 25-year period – from 1921 through 1946 – Keynes managed the endowment of King’s College at Cambridge University.

There, he compiled a remarkable track record, trouncing the British stock market by an average of 8% per year.

The Stock Market as a Beauty Contest

Keynes was also a colorful and quotable writer.

One of his most famous passages compared investing in the stock market to choosing the winner of a beauty contest.

In The General Theory, Keynes described a newspaper contest that published the pictures of 100 women.

Contestants were asked to choose the six women they thought had the most beautiful faces.

Contestants whose selections included the most popular face would then be entered in a raffle to win a prize.

Now, think about how you would go about trying to win this contest.

A naive strategy would be to choose the face that, in your opinion, is the most beautiful.

You might choose the face that reminds you of the redhead you had a crush on in sixth grade.

A more sophisticated strategy would be to choose the face you think the majority of contestants would choose.

That may lead you to choose a contestant who is a dead ringer for a famous reality TV star, expecting most contestants to include her in their top six.

And you could even carry your analysis one step further by trying to factor in what other contestants might think the collective opinion will be.

You can keep extending this strategy from one degree to the next.

In Keynes’ own words…

The analogy of the stock market is clear.

You don’t win by choosing an investment with the soundest fundamentals. ­­­­

You win by picking the investment that you expect others will soon bid up higher.

Keynes’ metaphor for the stock market is as valid today as it was in 1936.

Think of each day in the market as a Keynesian beauty contest where participants reassess what others think about what others are thinking.

Here’s how you can use Keynes’ insight to improve your investing.

First, understand that the market always has its favorite red-hot investment themes.

A few years ago, it was the BRICs – Brazil, Russia, India and China.

Yet even within these groups, some stocks are more attractive than others.

Last year, Amazon was the “belle of the ball.” 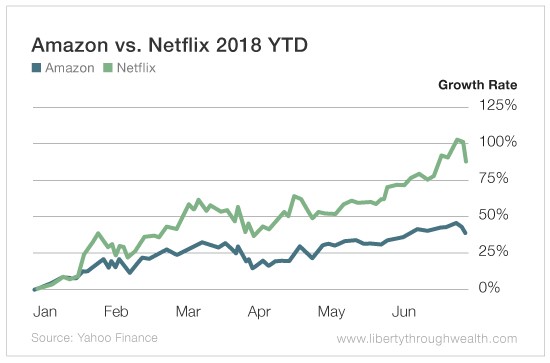 Once you’ve identified a market favorite, you can earn quick, outsized returns by merely going along for the ride.

So which FAANG stock do I expect to soar next?

I can’t tell you ahead of time. I always listen to what the market tells me before I cast my vote.

The one thing I know for sure…

Much like the latest reality TV stars, the beauty of each FAANG stock will wane with age.

And in a few years’ time, all FAANG stocks will be replaced by the next big thing.

And once an investment theme goes out of fashion, don’t look back. Never manage your money by looking in the rearview mirror.

The biggest irony is that Keynes himself wasn’t very successful applying his beauty contest metaphor to his own investing.

It’s a philosophy I’ll be exploring in a future column.

What I’m Doing With My Money Now (Part Two)

No Room for Guesswork When It Comes to...

A Simple Strategy for Making Money in the...