“The best way to predict the future is to create it.”

Of all the Founding Fathers, Benjamin Franklin and Thomas Jefferson, both inventors and students of science, understood the future of America was bright – largely because of our nation’s vast and growing number of talented inventors, scientists and entrepreneurs.

Near the end of his life, Franklin confessed, “I have sometimes almost wished it had been my destiny to have been born two or three centuries hence, for inventions of improvement are prolific, and beget more of their kind. The present progress is rapid.”

And Jefferson wrote that “the wonderful advances in the sciences and arts” during his lifetime were “extending the comforts of life to a much enlarged circle, to those who had before known its necessaries only.” He said, “I am for encouraging the progress of science in all its branches.”

In fact, Franklin and Jefferson were alive to see the first signs of the Industrial Revolution with the invention of the steam engine, which quickly led to the development of railroads in the 19th century. Then came the telegraph, the electric lightbulb and the telephone, followed by the automobile, airplane, radio, television and computer in the 20th century.

If they were alive today, Franklin and Jefferson would undoubtedly have been the first to have had a PC, email account and iPhone.

Franklin was especially intrigued by new methods to live longer and healthier lives. “I mention one reason for such a wish, which is that if the art of physic [medicine] shall be improved in proportion with other arts, we may then be able to avoid diseases, and live as long as the patriarchs in Genesis.”

Indeed, Americans and the rest of the world are living longer. Advances in medicine, hygiene and the green revolution have made a huge difference in how we live, work and play. The invention of vaccines, X-rays, penicillin, novocaine, open-heart surgery, the MRI, prosthetics and miracle drugs have all made a big difference.

In the late 1950s, MIT economist Robert Solow wrote a breakthrough article on economic growth and discovered that 80% of GDP growth was due to technical progress. For this discovery, he won the Nobel Prize in Economic Sciences in 1987.

So how does one invest in the next great breakthroughs and disruptive technologies in artificial intelligence, self-driving cars, fracking, digital currencies and biotech? 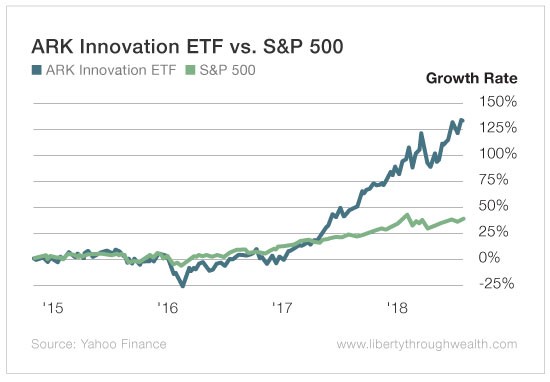 ARK is an actively managed exchange-traded fund (ETF) that has a great track record since its inception in late 2014. It seeks long-term growth by investing in U.S. and foreign stocks whose theme is disruptive innovation.

Most of these companies are American-based. Indeed, the U.S. has led the world in technological breakthroughs in computers, biotech and finance. Of course, today many of the CEOs of top tech companies are foreign-born, such as Satya Nadella (Microsoft), Jensen Huang (NVIDIA) and Eduardo Saverin (Facebook co-founder).

In sum, America will continue to be the incubator of technology as long as (a) Silicon Valley isn’t stifled by government red tape and (b) foreigners are allowed to immigrate into the U.S. without restrictions. The Trump administration is favorable toward (a) as it continues to deregulate, but may not encourage (b) under its nationalist policies.