Why It’s Time to Invest in the “Barbarous Relic”

“In truth, the gold standard is already a barbarous relic.”

After flooding the media with predictions of $5,000 per ounce gold for years following the financial crash of 2008…

Investors grew tired of their inaccurate doom and gloom predictions.

Hyperinflation brought on by quantitative easing (QE) never came to pass. The U.S. dollar has yet to replace the collectible 100 trillion dollar Zimbabwe notes as an icon of inflation.

Nor has the U.S. economy imploded.

Instead, the U.S. economy is entering its 116th month of expansion – the second-longest economic expansion on record.

Had you listened to the gold bugs, you’d have been left on the sidelines of one of the longest stock bull markets in history.

Notwithstanding Keynes’ withering disdain, gold has maintained its unique status as both a commodity and a store of monetary value.

And for a while, it was a great place to make money.

Gold enjoyed one of its greatest runs ever starting right around the dot-com bust in 2000.

That 12-year bull run made gold bugs seem like the smartest guys in the room.

Alas, things have been a lot tougher since gold peaked in 2011.

Had you invested in gold at its peak in 2011, you’d have lost more than 20% of your investment. 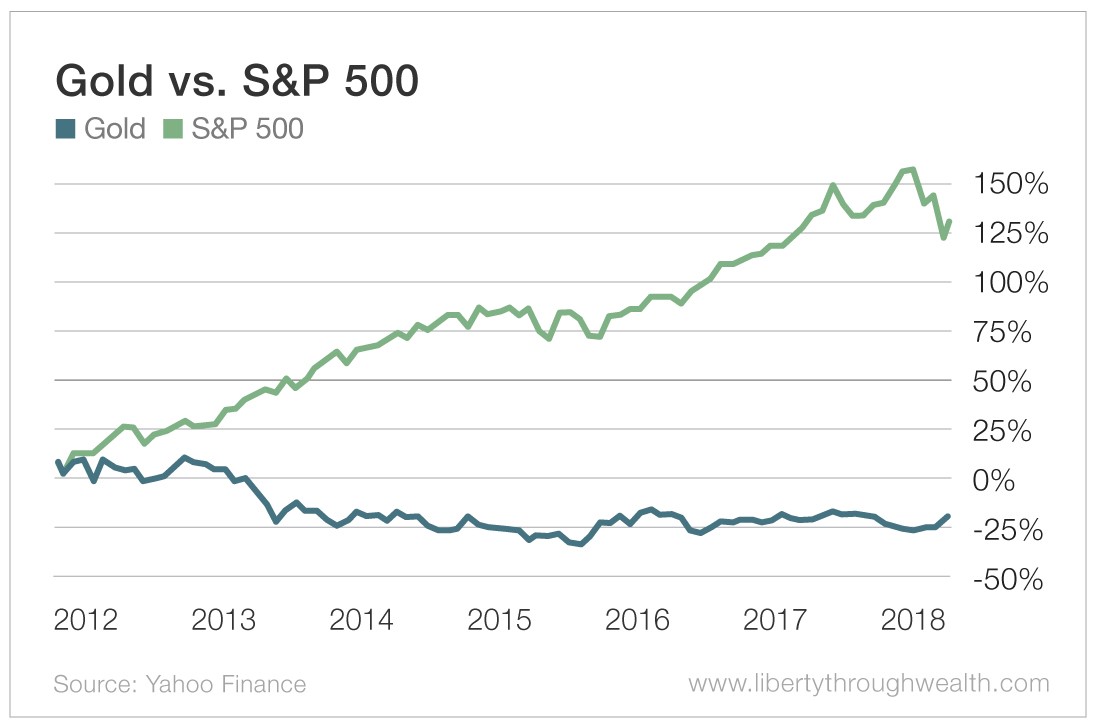 In short, gold has been a lousy investment for close to eight years.

Over the past three months, the price of the yellow metal has risen 6.5% even as the S&P 500 has traded flat.

And that strong outperformance has gold bugs excited.

I have my own views on gold.

A word of warning: if you’re a gold bug, you won’t like them.

I don’t believe that gold embodies an abstract Platonic ideal of value.

Instead, gold’s price is driven almost exclusively by sentiment. And that makes it a mere speculative asset, in the purest sense of the word.

Gold is not a financial asset. It pays no dividends or interest. And there is no way to model the monetary value of an asset that does not pay any income. In fact, it costs you money to store it.

The most compelling argument for not owning gold long term comes from the inimitable Warren Buffett.

Put another way, Berkshire has outperformed gold close to 300-fold.

Gold bugs love to point out that gold holds its value over the centuries. Today, you can buy a nice suit with a gold coin, just as you could in Roman times.

But you could also buy a beautiful townhouse in Sarasota, Florida, with a single share of Berkshire Hathaway you purchased in 1965.

After this kind of shellacking, you may be surprised to learn that I recently recommended a leveraged position on gold in my trading service, Oxford Wealth Accelerator.

I did so for one simple reason…

My “Money Matrix” – a dashboard of all stock markets and asset classes around the world I track every day – showed that gold entered a confirmed uptrend.

Whether gold is rising because of inflation fears…

Or because central banks like Russia’s are reducing holdings in U.S. Treasurys and replacing them with gold…

Investors are piling into gold.

My former colleague at TheStreet Jim Cramer also recently recommended the yellow metal, with a target price of $1,500.

Unlike the gold bugs, I’m not smart enough to tell you why gold is going up.

But the simple fact that gold is rising is good enough for me.

How Your Distorted Worldview Hurts Your Portfolio

10 Quick Ways to Improve Yourself Every Single Day

What I Learned From the Founder of the...

The World of The Jetsons Is Almost Here