The Goldman Sachs Indicator Is Flashing Red! Should You Care?

“During great swaths of its mostly charmed 142 years, Goldman Sachs has been both envied and feared for having the best talent, the best clients, and the best political connections, and for its ability to alchemize them into extreme profitability and market prowess.”

Goldman Sachs is the premier investment bank on Wall Street.

That’s why all ears on Wall Street perked up when it disclosed last week that its bull/bear market indicator was “flashing red.” 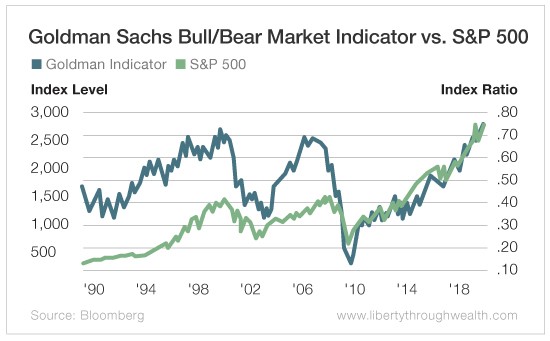 Should you be worried? My surprising answer…

That’s not because Goldman isn’t correct in its forecast. It may very well be spot on…

But Goldman’s predictions are an academic exercise – and they are entirely irrelevant to your success as an investor.

But it’s not even asking the right questions.

Goldman’s prediction of a bear market is based on a mishmash of financial inputs.

Historically, when the model has risen above 80% (it’s close to that now), the S&P 500’s average return over the following six months was -6%. Its next-year return was still negative, coming in at -2%.

Nor is Goldman alone in its bearish predictions.

Citigroup has also warned of an impending market pullback. Citi’s Panic/Euphoria model focuses on investor sentiment. It tracks measures like margin debt, options trading and the bullishness of newsletter writers.

According to Citi’s model, investor sentiment climbed to extremely optimistic levels for the first time since January – right before the 10% correction.

Levels this high have preceded negative returns in the stock market over the following 12 months 70% of the time.

Here’s the problem I have with these models. Like all predictive models, they look backward. And modeling complex financial markets is a mug’s game.

The past never equals the future. A single “black swan” event can upend all predictions completely.

Second, any financial analyst worth his salt can torture any data to fit almost any outcome.

For every model that Goldman or Citigroup analysts generate, I can show you one that says the complete opposite.

The day before Goldman released its report, Credit Suisse, another top investment bank, predicted the S&P 500 would advance to 3,350 by the end of 2019.

That’s why you should take all predictions with a grain of salt.

And instead of trying to predict the market, you should learn how to react to its unpredictable ebbs and flows.

Think about how the financial analysts at Goldman Sachs would learn how to surf.

First, they would gather vast amounts of data. Then they would develop elaborate models that track, say, the height and frequency of the waves they observe…

And only then would they determine – through complex calculations – the waves worth surfing.

They would do this all while sitting on the beach, hunched over a laptop.

Contrast this with the approach of the local surf bums…

They scan the ocean, make a “quick and dirty” decision, grab their surfboards and head out on the water.

Yes, these surfers will fall off some waves. Others they will miss completely. But they also experience the thrill of actually catching an unexpected and thrilling one.

First, analysts develop models to analyze and predict. In contrast, surfers use heuristics (rules of thumb) to make decisions.

That allows surfers to adapt to unpredictable and changing circumstances.

Second, unlike laptop-toting analysts, surfers actually get into the water.

You can’t learn to surf by reading a book or building an elaborate model, no matter how accurate it is.

Just don’t take them too seriously.

And in your real-world investing, be a surfer, not an analyst.

What’s the Best Safe Haven During a Financial Crisis?