In this FREE, three-part online event, Alex will share the exact methods behind his most profitable wins. And not only will you have the opportunity to receive three of Alex’s top stock picks, but you’ll even get the chance to ask Alex your questions using the chat feature.

You won’t want to miss this! We hope to see you tomorrow.

If you’re an average American adult, I bet you drank a cup of coffee this morning.

It’s a bet I’d be willing to make because the odds are firmly in my favor. The statistics surrounding coffee consumption in the U.S. are staggering.

As author Michael Pollan observes, for most of us, “to be caffeinated to one degree or another has simply become baseline human consciousness.”

But if you are a coffee drinker, I have some bad news for you: Your coffee habit is about to get a lot more expensive.

That’s because coffee prices are soaring.

But I have some good news as well.

Thanks to innovative financial products like exchange-traded notes (ETNs) – a close cousin of exchange-traded funds (ETFs) – you can easily profit from today’s bull market in coffee.

But let’s start first with…

A Brief History of Coffee

Six centuries ago, coffee was just an obscure berry from the highlands of Ethiopia.

But once the coffee was brewed, its benefits became well known, and coffee became a hotly traded (and grown) item around the world. In 1511, religious leaders in Mecca banned it altogether, suspicious of coffee’s intoxicating effects. A century later, coffeehouses had spread across the Ottoman Empire, introducing the beverage to Europe.

At first, Europeans were unimpressed.

In 1610, the British poet George Sandys described coffee as “blacke as soote, and tasting not much unlike it.”

Amsterdam – the world’s leading hub of international trade at the time – became one of the first places coffeehouses opened in Europe. Other commercial centers like Venice quickly followed.

The first coffeehouse in England opened in Oxford in 1652. Within a few decades, London boasted hundreds of coffeehouses. At their peak, there was one coffeehouse for every 200 Londoners.

When Benjamin Franklin came to London in 1757, he was nicknamed the “Water American.” This is because Franklin did not drink the low-alcohol beer that kept most Londoners in a perpetual alcoholic stupor.

In contrast, coffee – a “wakefull and civil drink” – helped them “play the good-fellows.”

Coffee made a day’s work possible. Some historians argue that coffee indirectly fueled the ensuing scientific and financial revolutions.

The History of Coffee in the United States

Coffee imports to the U.S. doubled every decade between 1800 and 1850. The widespread availability of cheap coffee helped ensure the U.S. would become a nation of coffee drinkers.

During the Civil War, the average Union soldier drank five cups of coffee a day. By the turn of the 20th century, consumption per person in the United States was 10 times that of Italy.

In the 1920s, Samuel Prescott, an MIT biology professor, found caffeine increased the body’s capacity for muscle or cognitive work within 15 minutes of consumption. Coffee was a miraculous form of instant energy.

All this brings us to the boom in coffee prices today.

Why is the price of coffee soaring?

Blame the always reliable law of supply and demand.

First, shipping bottlenecks in the two largest exporters, Brazil and Vietnam, are leading to supply shortages. The Coffee Exporters Council of Brazil said traders were struggling to secure containers. As a result, coffee export volumes in October had fallen 24% compared with last year’s.

Second, coffee farmers in Brazil were hit by the worst drought in a century. Then came severe frosts in July. Finally, the arrival of La Niña in South America further hindered production.

Third, with soaring prices, speculative demand for coffee has exploded. All players along the coffee supply chain are looking to cash in on coffee’s surge. The major roasting companies are buying up coffee stocks wherever they can. Farmers are failing to deliver coffee at agreed-upon prices as they attempt to resell stocks at current higher prices.

There’s little doubt your daily cup of coffee will be costing you more in the coming months.

The good news is you can cash in on the boom by investing in the price of coffee directly. 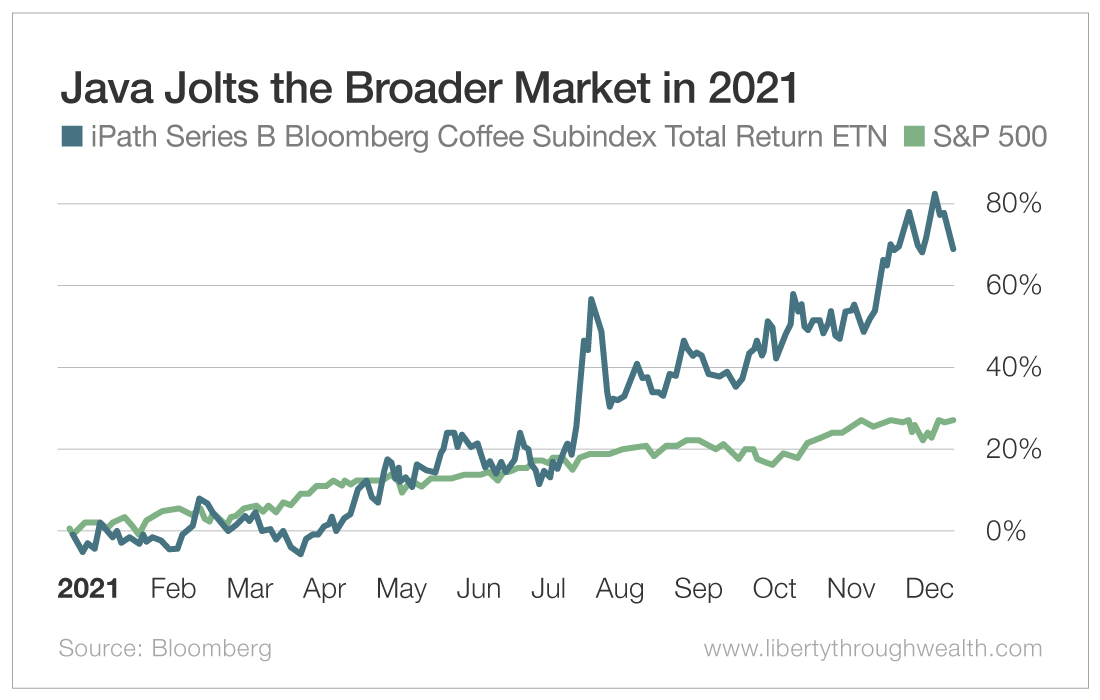 The iPath Coffee ETN’s expense ratio is 0.45%. It is the largest and most liquid coffee ETN, with total assets of $88 million.

The fund has been one of the top performers in the commodities space in 2021 and is up about 75% year to date. 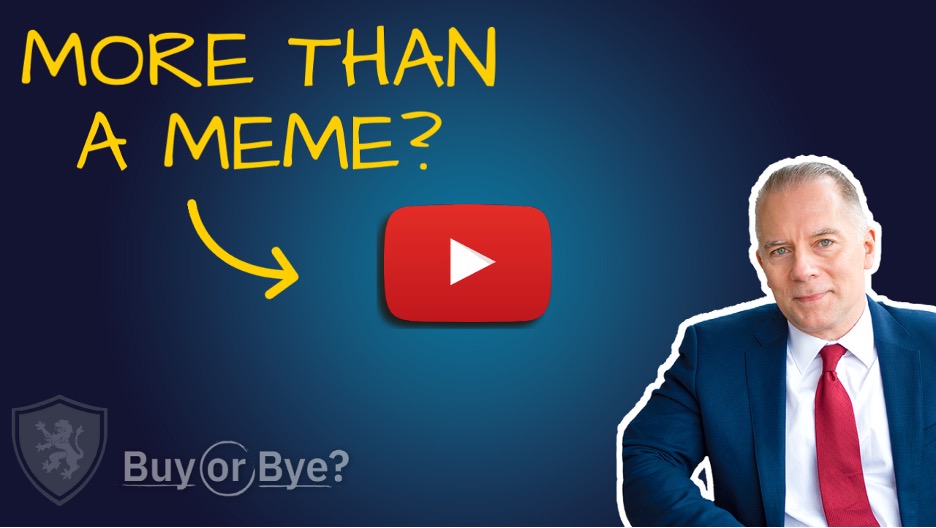 How Investors Can Gain a Big-Money Edge