If you want to read the same articles that shape the opinions of Microsoft (Nasdaq: MSFT) founder Bill Gates and Berkshire Hathaway (NYSE: BRK-A) Vice-Chairman Charlie Munger, The Economist is your publication.

That’s also why Economist cover stories have long been one of my favorite contrarian indicators. When I see one with a clearly bullish or bearish slant, I always ask myself whether the opposite could be true. 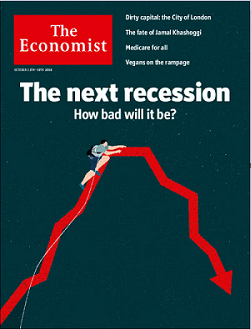 The message could not have been clearer: The global economy is on the brink of recession.

Alas, the arguments The Economist set out were disappointingly conventional.

As I put on my contrarian hat, The Economist’s cover story tells me two things.

Recessions happen when magazine covers suggest that everything is fine and dandy. They don’t happen when major publications predict a slowdown is around the corner.

Second, the current U.S economic expansion could go on longer and stronger than most pundits expect.

An economic cycle starts from a trough and moves into expansion. It culminates in a peak of activity, endures a contraction and ends in recession, heading back toward a new trough. 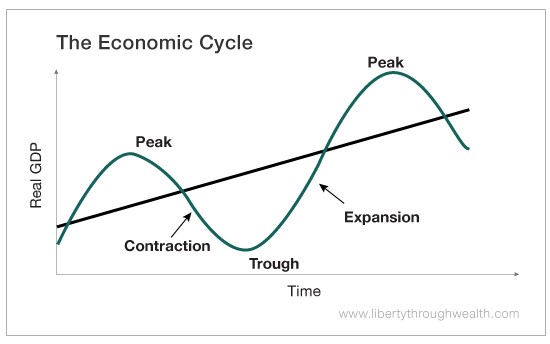 But analyzing the economic cycle is more complicated than this simple graph suggests.

The subcycles that make up the broader economic cycle are rarely as smooth or symmetrical as depicted above. The expansion phase typically lasts longer than the contraction phase. And some subcycles pause before resuming. Some peak before they’re reflected in GDP. And some are coincident with peak activity, while others lag.

At 110 months, the current U.S. economic expansion is now the second longest on record. Conventional wisdom suggests a downturn is due.

First, the pace of the current U.S. expansion has been tepid.

Yes, in 10 more months, it will tie the record with the 1990s expansion in length. But with real GDP expanding at 2.3% per annum, it’s also been the slowest expansion ever.

Historically, a typical post-war expansion lasted an average of five years, with the economy growing at 4.6% per year. Real GDP increased by an average of 25%.

All this suggests the economy is far from overheated.

Second, while the current expansion is getting long in the tooth, economic expansions don’t die of old age.

They die because of overinvestment, tighter financial conditions and outside shocks.

To date, the current expansion has been remarkably free of economic imbalances.

This suggests the U.S. business cycle remains strong and that growth could top 3.5% heading into 2019.

Second, a recent study by Ned Davis Research reviewed a dozen subcycles. Its conclusion? Not a single one of its indicators is even close to flashing a recession reading.

So how much further can the current U.S. expansion go?

But the numbers suggest the current expansion could extend beyond the consensus of 2019.

One thing is clear…

The U.S. economy is not on the verge of entering a recession.

So don’t run for the hills just yet.

Your Single Most Important Investment Decision

The Good, the Bad and the Ugly About...