On January 23, I attended a presentation on Brexit – the United Kingdom’s exit from the European Union scheduled for March 29, 2019.

Sponsored by the Bruges Group – a London-based organization focused on the discussion of Britain and its role in the EU – the event took place just down the street from the houses of Parliament.

To enter the event, I had to make my way past a tight phalanx of a half-dozen TV cameras – as well as fight through a rugby scrum of Brexit supporters congregated before the entrance.

The supporters each had a colorful Union Jack with the slogan “Brexit means Brexit” emblazoned across the backs of their jackets.

Upon hearing my American accent as I checked in, the organizer gave me a funny look – I had been pegged as an interloper.

As I entered the jam-packed room, I was greeted by a large Brexit countdown clock projected onto a screen. 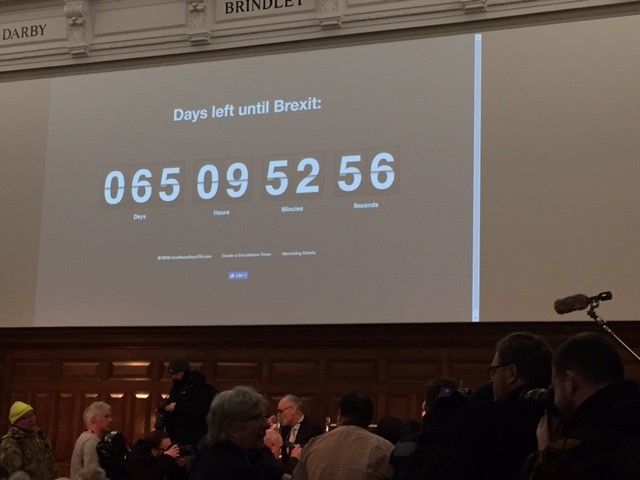 The pro-Brexit audience was eagerly counting down the seconds to “Freedom Day.”

While introducing the panel, the moderator even channeled the famous line from Martin Luther King Jr.’s “I Have a Dream” speech:

So just who is this group of committed Brexiteers?

By my reckoning, the average age approached 70.

I heard a lot of posh British accents – the kind that makes even an Ivy League educated American feel like a bumbling yahoo.

For this audience of aristocratic Brits, Brexit was about one thing and one thing only: the reassertion of British national sovereignty in the face of a creeping EU bureaucracy.

Jacob’s father, Lord William Rees-Mogg, was co-author of The Sovereign Individual: Mastering the Transition to the Information Age – a 1999 libertarian manifesto familiar to some Oxford Club Members.

One particular grievance of the Bruges Group emerged quickly…

The domination of the mainstream media by “Remainers” – those who voted to stay in the EU.

The Bruges Group believes there is a vast media conspiracy to derail Brexit.

And they are standing for none of it.

The Economic Case for Brexit

Roger Bootle, the founder of Capital Economics and a columnist for the conservative Daily Telegraph, set out the economic case for Brexit.

He began by observing that you’ll rarely ever come across the economic argument to support Brexit anywhere.

Instead, the media focuses on scaremongering. Stories of businesses hoarding food and the government stockpiling pharmaceuticals ahead of the deadline dominate discussions of Brexit.

Bootle also pointed out “no-deal Brexit” – the prospect of the U.K. exiting the EU without any agreement – was a misnomer.

Instead, this outcome would be a “multi-deal Brexit.” It would merely allow the U.K. to negotiate separate trade deals with individual nations on its own terms.

Nor was no-deal Brexit like “falling over a cliff” – the favorite metaphor of mainstream British press.

That’s because if no-deal Brexit comes to pass, trade will default to the World Trade Organization (WTO) rules. And U.K. businesses already use WTO rules for all of their non-EU trading partners (that is, for roughly half of all of their foreign trade).

Bootle closed with a non-economic argument.

Even if Brexit entails short-term dislocation for British businesses… so be it.

Brexit is about the United Kingdom’s sovereignty. And a country’s sovereignty is a much bigger, generational issue whose importance trumps short-term inconveniences to businesses.

In other words, “Keep Calm and Carry On.”

How Will Brexit Turn Out?

Brexit has turned out to be much more complicated than a quick exit from an economic customs union.

Unexpectedly, it must address historically sensitive issues relating to the currently open border between Northern Ireland and the U.K. – and a raft of other complex problems.

I can in no way do justice to all the nuances involved.

But I can summarize the three options on the table.

First, a no-deal Brexit. The U.K. exits the European Union on March 29, and the cards fall where they may. Members of the Bruges Group would applaud this result.

Third, Parliament sets a new referendum on Brexit. A second vote would allow the country to consider the real choices offered: pursue a no-deal Brexit, accept the prime minister’s deal or remain in the EU.

Voters might still choose a no-deal Brexit. And if they decide to remain, the U.K. could revoke Brexit.

The catch-22 is this: No matter what the outcome, half of the U.K.’s population will remain angry and disenchanted.

Global investors have already rendered their verdict on the political chaos in Westminster.

The U.K. kept its place as the most hated region in January’s Bank of America Merrill Lynch Global Fund Manager Survey.

Fund managers have not been this underweight the U.K. stock market for the past 20 years.

Such extremes in sentiment always offer outstanding investment opportunities – ones that I’ll be tracking closely in the coming months.

No matter how it turns out, Brexit will eventually be resolved one way or another.

High Inflation: Due to Corporate Greed… or Government...