Back in the fall of 2017, when I asked a hedge fund manager at an exclusive gathering of London’s financial elite to assess the threat that exchange-traded funds (ETFs) posed to the hedge fund industry…

My question was dismissed with withering disdain.

He compared ETFs to a Yugo – a shabby Eastern European car – and his own high-end, expensive hedge fund to a Porsche – a highly engineered and expensive speed demon.

Interviewed in Jack Schwager’s original Market Wizards, Tudor Jones is one of the granddaddies of hedge fund investing.

Like George Soros, Tudor Jones made his billions by making massive leveraged bets on everything from stock futures to commodities and currencies.

His transformation from hedge fund cowboy to ETF manager is a colorful fable that tells the tale of the slow and steady decline of the hedge fund industry.

How Tudor Changed His Tune

To those familiar with Tudor Jones’ previous reputation, it came as a shock when, in June 2018, he launched the Goldman Sachs JUST U.S. Large Cap Equity ETF (NYSE: JUST).

Cloaked in the language of “socially responsible” investing, the ETF’s objective is a noble one – and consistent with the “virtue signaling” behavior of today’s billionaires.

Tudor Jones’ ETF invests exclusively in “ethical companies”: organizations that pay better, create more jobs, pay fewer fines, give more to charity, emit less greenhouse gas and have a higher return on equity compared with other companies in the Russell 1000.

Tudor Jones boasted that he could “do well by doing good.” After all, in the 18 months before it launched, his ETF would have beaten the Russell 1000 by 3.6%. (Its real-world performance has been far less spectacular.)

I don’t buy into the “packaging” of Tudor Jones’ ETF. I believe he’s trying to mask a very uncomfortable reality.

Yes, Tudor Jones was a market wizard in the 1970s.

But those skills just don’t cut it in today’s more sophisticated markets.

Once you dig into the details, Paul Tudor Jones’ ETF strategy is positively pedestrian.

The Goldman Sachs JUST U.S. Large Cap Equity ETF differs little from the hundreds of other “smart beta” ETFs out there.

And perhaps most importantly, when the likes of Tudor Jones launch an ETF, it signals yet another nail in the coffin of the hedge fund industry.

ETFs Are Hot; Hedge Funds Are Not

Hedge funds have been in decline for more than a decade, even as ETFs have exploded.

Growth in ETFs has outpaced the growth in hedge funds since the financial crisis in 2008. And by 2015, assets invested in the global ETF industry had surpassed those invested with hedge funds.

Most recently, assets invested in ETFs hit $4.8 trillion at the end of 2018. In contrast, last year the global hedge fund industry saw assets fall to $3.1 trillion.

So why did the Yugo prevail over the Porsche?

First, hedge funds overpromised and underdelivered. They promised a secret sauce for making money for their investors in both up and down markets.

But they have fallen short in a spectacular fashion. As a group, hedge funds have trailed the S&P 500 every single year since 2008. 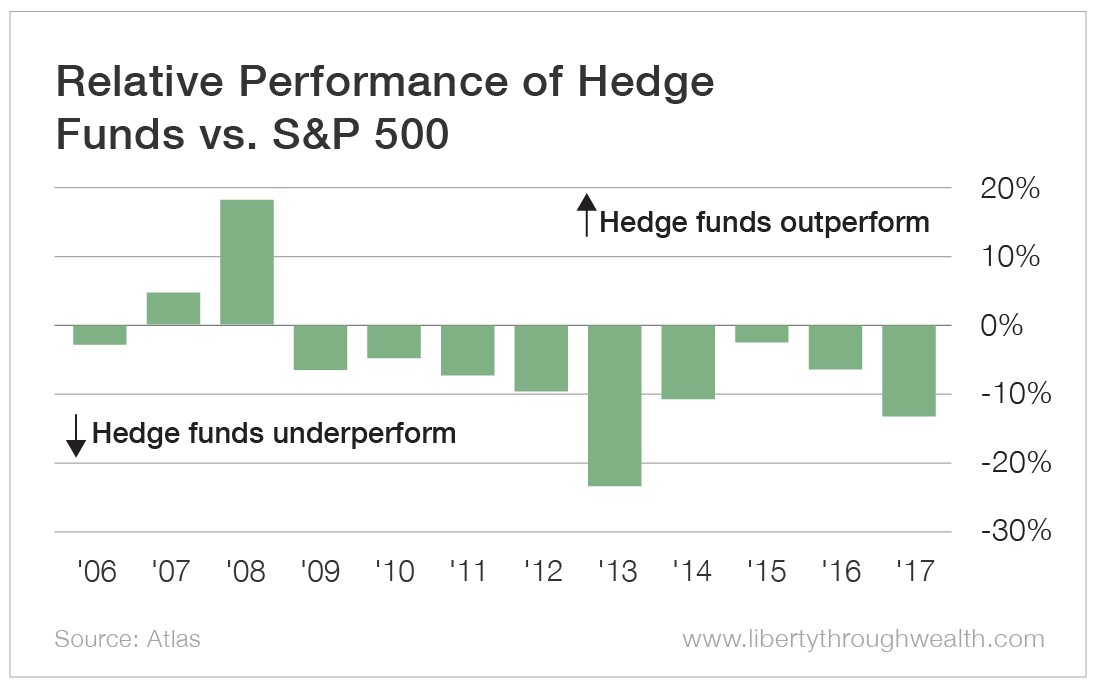 The “smart money” wasn’t so “smart” after all.

Ironically, the performance of Paul Tudor Jones’ own hedge funds over the past decade has lagged that of his new ETF substantially. Between 2010 and 2012, he endured his worst three-year stretch ever, averaging returns of just 5% annually. (Tudor Jones’ hedge funds still manage about $7 billion.)

Second, even as hedge funds repeatedly trailed the market, they kept their high fees.

Tudor Jones is lucky he’s already made his money…

The 0.2% per year he charges for managing the JUST U.S. Large Cap Equity ETF would have never made him a billionaire.

Hedge funds once represented the cutting edge of investing.

And the cutting edge of sophisticated investing is represented by ETFs: systematic, creative, transparent and cheap investment vehicles that offer investors both better returns and a fairer shake.

And those who dismiss ETFs as the Yugos of the investment world are simply in denial.

Is It Time to Bet Big on Warren...