Hedge funds have had a rough decade.

At one time, hedge funds were the ultimate financial free lunch. Wall Street’s “masters of the universe” not only beat the market but did so with lower risk.

And hedge fund managers and their clients got rich in the process.

But something changed after the financial crisis of 2008. Since then, many of the world’s most elite hedge funds have been throwing in the towel.

The granddaddy of all hedge fund managers, George Soros, returned outside investors’ money in 2011. The equally able David Tepper of Appaloosa Management recently did the same.

Even hedge fund managers staying in the game aren’t faring well. Whether it’s a pioneering hedge fund manager like brainy Bruce Kovner of Caxton Associates, brash Bill Ackman of Pershing Square Capital Management, or even the avuncular Warren Buffett… Each has trailed the S&P 500 over the past decade.

But here’s what’s even more shocking… Since the market bottomed in March 2009, not only have hedge funds underperformed the S&P 500, but the world’s smartest money has even lagged lowly bonds. 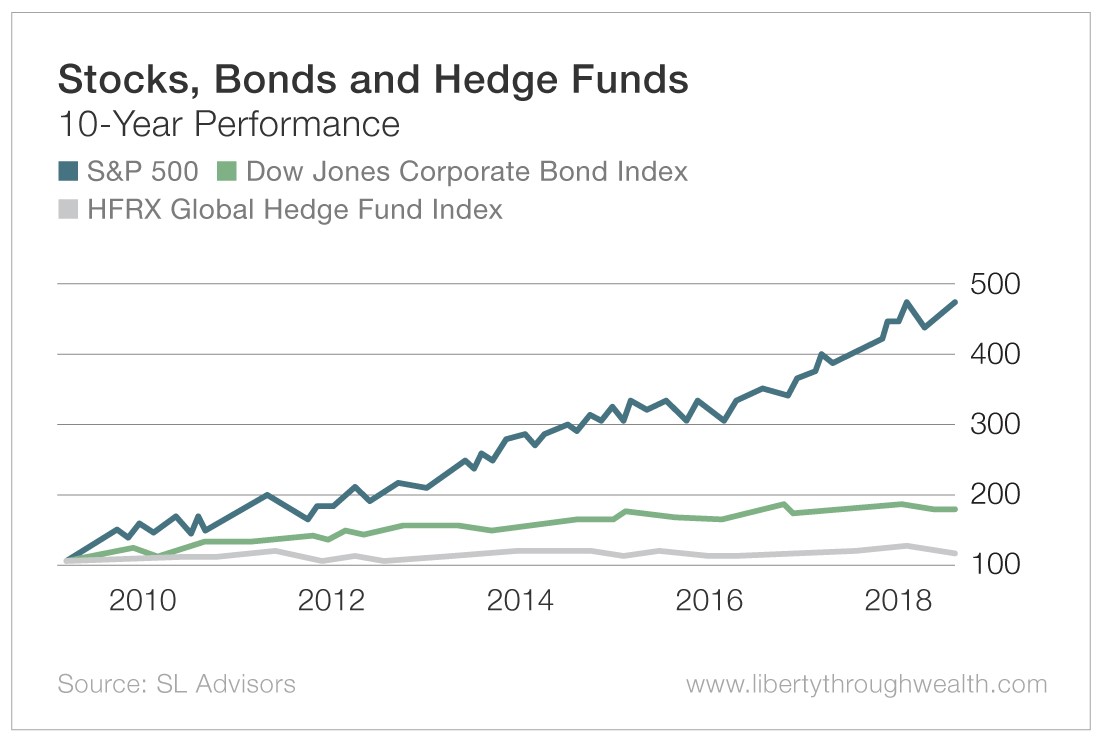 I’ve written before about the importance of mental models in investing.

Buffett’s partner Charlie Munger has attributed his investment success to the worldly wisdom of mental models.

I recently came across a mental model that may explain both Berkshire’s and hedge funds’ lagging returns. You may have heard of English author Lewis Carroll’s novel Alice’s Adventures in Wonderland.

It follows the adventures of a young girl, Alice, who falls into a rabbit hole populated by highly peculiar creatures. In Carroll’s follow-up novel, Through the Looking-Glass, Alice enters a world where, just like a reflection in a mirror, everything is reversed.

In one scene, Alice and the Red Queen are running hand in hand. The Queen is running so fast that Alice can barely keep up with her. The Queen keeps crying, “Faster! Faster!”

Alice notices that no matter how fast they go, they never seem to pass anything. Eventually, the Queen stops running, allowing Alice to rest:

Alice looked round her in great surprise. ‘Why, I do believe we’ve been under this tree the whole time! Everything’s just as it was!’

‘Of course it is,’ said the Queen, ‘What would you have it?’

‘Well, in our country,’ said Alice, still panting a little, ‘you’d generally get to somewhere else – if you ran very fast for a long time as we’ve been doing.’

‘A slow sort of country!’ said the Queen. ‘Now, here, you see, it takes all the running you can do, to keep in the same place. If you want to get somewhere else, you must run at least twice as fast as that!’

How Hedge Funds Lost the Race With the Red Queen

So how did hedge funds fall down this rabbit hole and lose out to the Red Queen?

Early in his career in the 1960s, Soros focused on mispriced European stocks. It was easy for one reason: No one else on Wall Street was doing it. As Soros himself confessed, he was “the one-eyed king among the blind.”

Today, no cranny of the investment world is left untouched by analysts. You have more information on European stocks on your smartphone than Soros ever had in the 1960s. And you can invest in, say, Denmark or Russian small cap stocks through an ETF with a couple of taps on your phone screen.

Today, there are tens of thousands of “quants” armed with PhDs working on Wall Street. Quant hedge funds like Renaissance Technologies and D.E. Shaw spend tens of millions of dollars combing through global financial markets, sucking out every drop of pricing inefficiency.

These insights have been translated into algorithms, which now account for more than 70% of trading on U.S. stock exchanges.

When Benjamin Graham and David Dodd first published Security Analysis in 1934, the ability to identify cheap stocks was a rare skill. When modern portfolio theory first seeped into finance curriculums in the 1970s, its insights still added value.

Today, the entire world is awash with chartered financial analysts trained in valuing a company and the tenets of modern finance. It should be no surprise that, over the past decade, neither insight has offered investors an edge.

Like Alice, hedge funds have been running hard alongside the Red Queen that is the market. And they are running harder and harder just to stay in place.

Alas, not only are hedge funds not keeping up… but they have fallen ever further behind.

So don’t ever succumb to the temptation of giving your money to a hedge fund. You can’t exclude the possibility of another Soros or Buffett trouncing the market over the next 30 years. But thanks to the Red Queen Effect, that’s not a bet I’d be willing to make.

P.S. Founded by American Brian Rose, London Real is a media and training company that offers terrific interviews with some of the world’s leading thinkers. I highly recommend you check it out.

Locking In 53.7% Gains on a Biotech Leader

Three Investing Rules to Live By