Douglas Adams wrote my favorite book of all time, The Hitchhiker’s Guide to the Galaxy.

And I always quote “Don’t panic” when we talk about volatility.

But in the late 1990s, Adams also penned a very insightful essay, “How to Stop Worrying and Learn to Love the Internet.”

In it, he laid down three rules that govern our attitudes toward technology.

I’ve relied on these over the years to help me spot opportunities in new fields.

In short, the world is far from stagnant. Technology always marches forward.

The same is true of the markets.

That’s why I looked at the 10 industries that are supposedly “the beginning of the end of civilization.”

But I believe these are the sectors that investors will learn to love over the next five years. 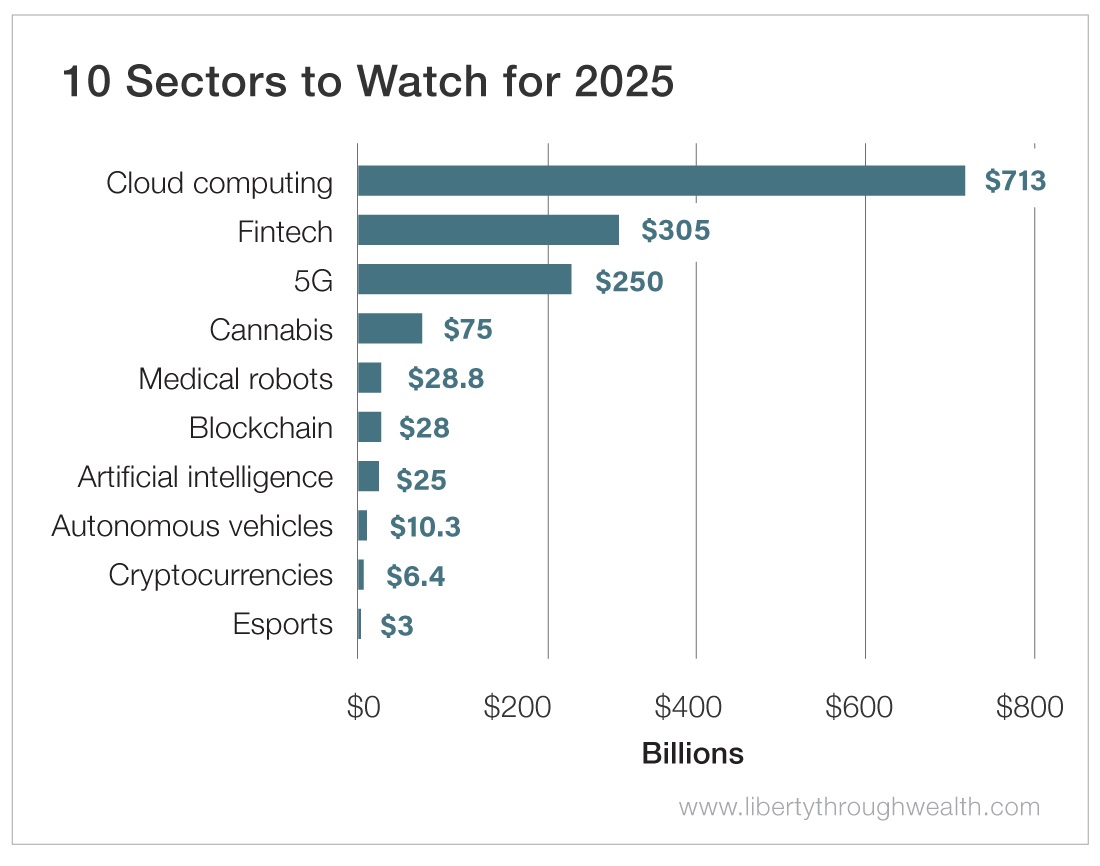 “The growth is over,” they claimed.

Well, they were wrong.

Big names in the sector continue to post even bigger gains. In fact, Microsoft (Nasdaq: MSFT) is hitting new highs on major contract wins as it works to close the gap with Amazon Web Services.

The global cloud computing market is expected to be worth more than $712 billion by 2025.

Fintech is another massive opportunity, projected to be worth more than $305 billion in the next five years.

Plus, there’s the revolutionary 5G space. Globally, we’re looking for this to be worth more than $250 billion by 2025. And that will affect all aspects of our lives.

But even though a market might not be worth hundreds of billions in five years, that doesn’t mean it fails to offer exciting opportunities.

This is an industry that’s just beginning to really take root. But it already has a high level of visibility. Overwatch League games are televised on major networks. And the teams have loyal followings, just as any other traditional sport has.

Plus, esports continue to draw deep-pocketed investors, like New England Patriots owner Robert Kraft, who are swooping in and gobbling up franchises.

There’s also the cannabis industry – which I follow closely here. Conservatively, the global market is projected to be worth north of $75 billion by 2025. And we know the U.S. market alone will top $80 billion by 2030.

Pot stocks are no longer flying high in 2019. But the outlook is extremely bullish for the next five years and beyond.

Two decades ago, no one would’ve imagined that people could legally be making money selling pot or playing video games for a living.

Nor did most of us see a world where digital currencies could be traded and profited from.

But here we are.

Of course, finding the “next big thing” is only one piece of the puzzle.

The trickiest part is uncovering which companies in those disruptive sectors are going to produce the biggest gains.

And here, I apply my own three rules…

These are the basic rules I believe investors should follow for the biggest gains over the next five years.

Merely targeting disruptive technologies isn’t going to be enough. I believe we need to add in a mixture of technical indicators that can locate investments where the pressure is just beginning to build… and shares are about to pop.

If you combine all of this, you can help manage your risk versus reward. And position yourself to come out ahead…

Even if that means investing in something you think will be the “end of civilization as we know it.”

What Spanish Property Taught Me About Investing in Commodities