I hope you’re able to enjoy a wonderful and relaxing first day of 2020. We look forward to a profitable year ahead!

For investors, 2019 will go down in history as one of the best years in recent memory.

Financial markets across the globe generated more than $17 trillion of wealth in 2019. Not only did every asset class gain, but those gains were remarkably consistent, with the S&P 500 rising on nearly 60% of 2019’s trading days.

A year ago, investors could not have been more pessimistic. The CNN Fear & Greed Index – a broad measure of market sentiment – had dropped below 5, indicating extreme fear.

Deutsche Bank had just called 2018 “the worst year on record” for investing. With an unprecedented 93% of all investment assets down, 2018 was worse than any of the years of the Great Depression.

December 2018 was the worst close to a year since 1931, and the Nasdaq closed its worst month ever.

On December 31, 2018, I went sharply against that negative sentiment.

I predicted the S&P 500 would close the year up by at least 20%. I pointed out that when sentiment got this negative, the market was higher a year later 100% of the time.

I also recommended the ProShares UltraPro S&P 500 ETF (NYSE: UPRO). This triple-leveraged bet on the S&P 500 more than doubled in 2019.

It’s easy to be optimistic after such a barn-burning year.

And, as always, it’s hard to go against today’s extreme market sentiment. I would love to embrace the consensus and predict the U.S. stock market will continue to rally.

That may happen. But history and the markets’ current extremes tell us that this is highly unlikely.

As I write this, the Fear & Greed Index stands at 93. That puts it a mere seven points away from the maximum of 100.

A year ago, the same measure stood at a lowly 4. It was almost zero.

Today’s optimism is as extreme as last year’s pessimism. And, to me, that is a flashing red light.

If you want a shortcut to market-beating returns, invest when the Fear & Greed Index is under 20. And sell when it climbs above 80.

Extremes in one direction tend to be followed by extremes in the other. So 2020 is far more likely to bring a market meltdown than a market “melt-up.” 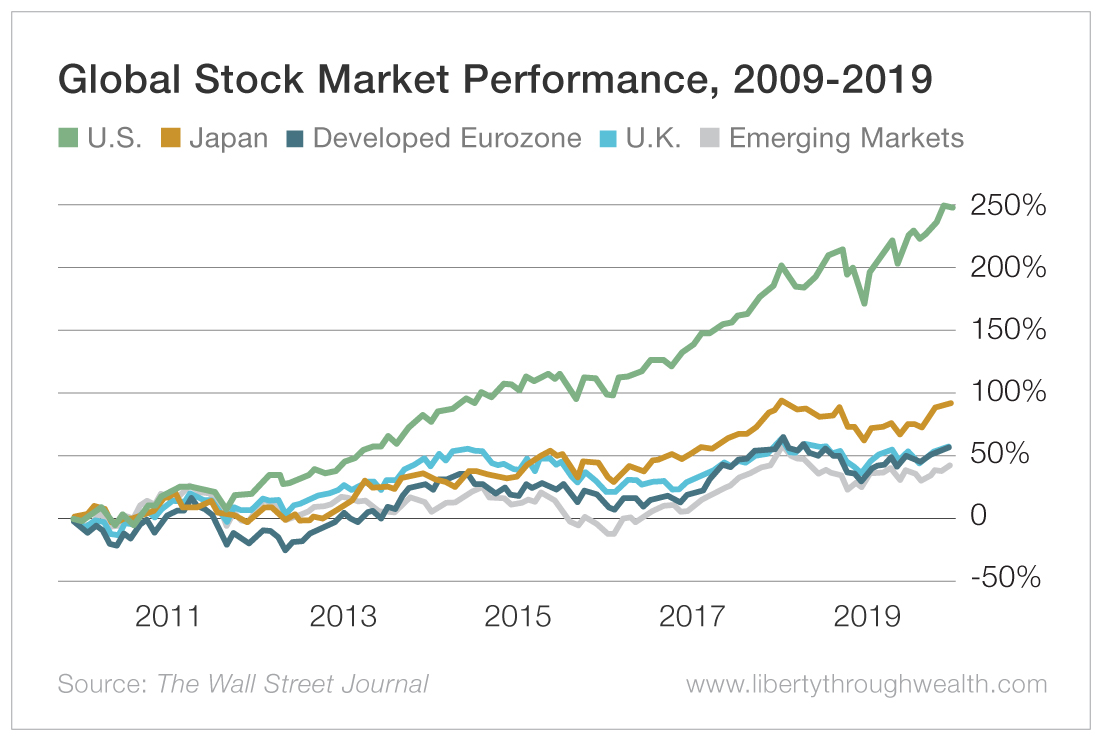 With the benefit of 20/20 hindsight, there is good reason for this.

Over the past decade, the U.S. economy has grown faster than other developed markets. The U.S. skirted the financial crises that hit developed Europe and many emerging markets. U.S. tech companies have been global leaders in disruptive technologies.

But here’s the challenge…

The U.S. stock market is far more expensive than the rest of the world’s markets. And it wasn’t that way a decade ago. At the start of 2010, the U.S. market traded at 14.5 times expected operating earnings over the next 12 months. Today, that number stands at 18.

That makes the U.S. market far more expensive than almost any other market on the planet.

And U.S. tech companies – the source of much of this decade’s big gains – will continue their dominance across the globe.

That’s because markets go in cycles. Yes, the 2010s were an excellent decade for U.S. stocks. But few of us remember that they followed the terrible 2000s decade, when U.S. stocks lost money – even with dividends reinvested.

I expect the best opportunities in 2020 will be in betting against the last decade’s money-losing “story stocks” like Tesla (Nasdaq: TSLA) and Uber (NYSE: UBER).

On the one hand, I would love to be right.

On the other, for the sake of Americans’ investment portfolios, I hope I am wrong.

The Coming War on Investors