“For 240 years, it’s been a terrible mistake to bet against America, and now is no time to start.”

Warren Buffett is no pessimist.

He believes that the American economy will continue to deliver growth and prosperity. And Buffett would never bet against America in the long run.

None of us can get inside Buffett’s head.

But his actions speak louder than his words. Those actions all point in one direction: Buffett believes that the U.S. stock market is overvalued.

And he is positioning himself to exploit the opportunities in a coming market crash.

Warren Buffett has called one specific measure “probably the best single measure of where valuations stand at any given moment.”

And this measure is the ratio of total market capitalization (TMC) to gross national product (GNP).

Over the past four decades, the TMC-GNP ratio has varied widely.

The highest point was 148% during the peak of the tech bubble in 2000. Over those 18 years, the U.S. stock market enjoyed a massive bull market.

At the same time, he has a laser-like focus on the big picture.

About the prospective returns of the U.S. market, Buffett said…

I’d like to argue that we can’t come even remotely close to that 12.9%… [I expect] 4% in real terms. And if 4% is wrong, I believe that the percentage is just as likely to be less as more.

Two years later, the Dow was down to 9,000. And Buffett wrote, “I would expect now to see long-term returns run somewhat higher, in the neighborhood of 7% after costs.”

Nine years have passed since the publication of the article of November 22, 1999, and it has been a wild and painful ride for most investors; the Dow climbed as high as 14,000 in October 2007 and retreated painfully back to 8,000 today.

Buffett’s prediction? “Equities will almost certainly outperform cash over the next decade, probably by a substantial degree.”

And U.S. stocks embarked on a decadelong bull run.

Prospects for the Market

What does Buffett’s favorite indicator tell us about the outlook for the U.S. stock market? 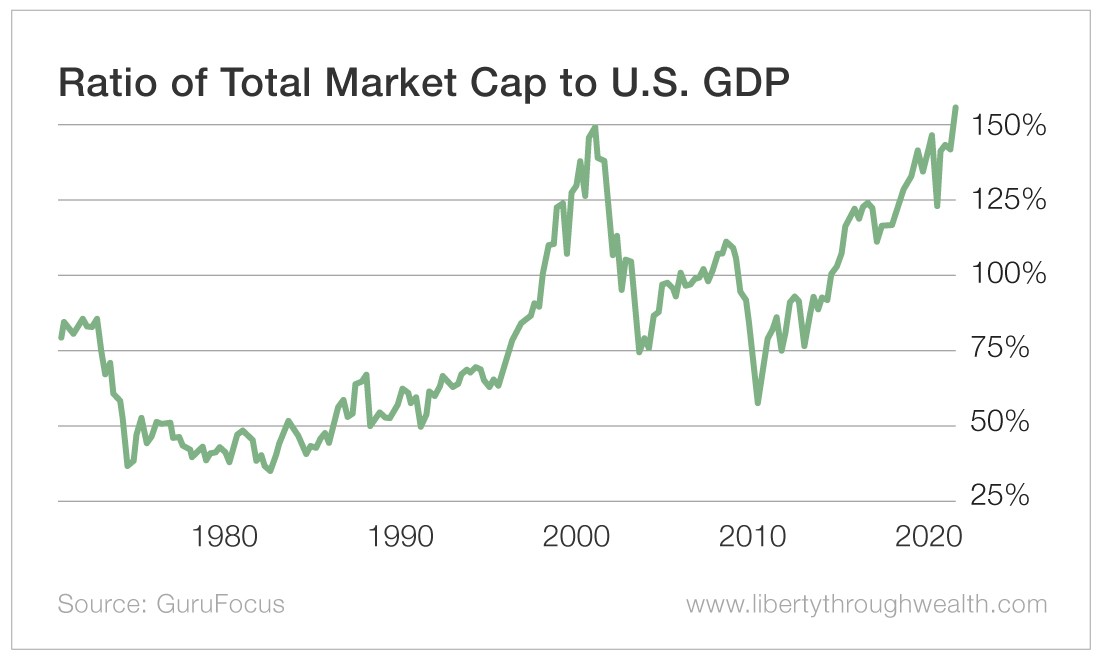 Today, the total market cap of U.S. markets stands at around $33.5 billion. That equates to roughly 155% of its gross domestic product (GDP).

The ratio of TMC to GDP has never been higher… and has even surpassed the height of the dot-com boom.

(The chart above compares TMC with U.S. gross GDP, not GNP. Although GNP is different from GDP, the two numbers are within 1% of each other.)

So what can you expect the stock market to return in the coming years?

But all agree that a combination of interest rates, corporate profitability and market valuation determines long-term stock market returns.

And their models come to the same conclusion: U.S. market returns over the next decade will be flat to negative.

Here’s What Buffett Is Thinking

Buffett has yet to opine publicly about the U.S. stock market’s prospects.

But again, his actions speak louder than his words.

Berkshire is sitting on a $128 billion pile of cash. And unlike, say, Apple (Nasdaq: AAPL), Berkshire Hathaway (NYSE: BRK-B) is not actively buying back its own shares.

Buffett has his eye on his favorite indicator. And it’s flashing red.

That’s why Buffett is holding on to his cash, ready to swoop in after any market crash.

Warren Buffett may never bet against America. But he will bide his time until he can get a good price on it.

Why Buy the World’s Cheapest Stocks?

How to Profit From the Geography of Genius