“In a bear market, the winner is he who loses the least.”

In the January 2020 prediction issue of my newsletter, Forecasts & Strategies, I stated, “The outlook for stocks, gold and the dollar is positive as we enter 2020, but beware of a ‘black swan’ event that could derail the longest running bull market in history.”

Indeed, that bull market is now history, and with the stock market down more than 30% this year, we have entered a new bear market. The black swan turned out to be a virulent virus coming out of China that has wreaked havoc on the global economy and the markets, and may even change the occupants in the White House.

How do you protect your portfolio during this treacherous sell-off?

A few publicly traded companies, such as medical technology companies and grocery stores, have advanced during this crisis, but the vast majority of stocks have tanked, and some have collapsed. Even utility stocks have dropped. Where to hide?

The traditional flights to safety, U.S. Treasury securities and money market funds (cash), can preserve your capital. But don’t expect to make much. Rates have fallen to zero in T-bills and below 1% in 10-year Treasurys.

The Golden Bear Is Still Hibernating

What about gold and silver? Traditionally they have been reliable crisis and inflation hedges, but they too have fallen. According to Wall Street analysts, precious metals and mining stocks tumbled because highly leveraged institutions and investors are selling everything – the good and the bad – to raise cash.

As the old saying goes, “When the paddy wagon rolls up, they take the good girls and the bad.”

Silver, in particular, has been hit hard and is now under $13 an ounce. Despite the decline in precious metals prices, demand for American Eagle gold and silver coins has skyrocketed, and the U.S. Mint is temporarily out of stock!

I firmly believe that with the Fed cutting rates to zero and reinstituting quantitative easing, and the federal government bailing out the economy with monstrous new deficits, the outlook for gold and silver is bullish into 2021. I recommend the SPDR Gold Shares ETF (NYSE: GLD).

What about mutual funds and exchange-traded funds whose aim is to preserve your capital?

In most cases, they, too, have faltered. For example, the Permanent Portfolio Class I Mutual Fund (PRPFX), which invests heavily in Treasurys and cash, is down 20% from its highs. The Direxion Flight to Safety Strategy ETF (NYSE: FLYT) invests in U.S. Treasurys, gold and conservative utility stocks and is down 10%.

How about shorting the markets through ETFs, such as the ProShares Short S&P 500 (NYSE: SH)? It’s ahead 23% year to date. This is a good way to preserve your capital without actually selling your stocks.

Nicholas Vardy, an Oxford Club expert on ETFs, recommends it. But expect a lot of volatility, with violent swings depending on the market mood, announcements from the White House and intervention by the Plunge Protection Team in Washington.

The market’s extreme volatility has made it difficult for hedge funds to make money consistently. Jim Simons’ Renaissance Technologies, one of the world’s largest and most secretive hedge funds, has struggled to navigate this roller-coaster ride.

Over the years, it has developed a quantitative, computer-generated “high frequency” trading system, but it has suffered one setback after another and is now down 12% this year through mid-March.

One exception is Karim Rahemtulla’s short-term trading system, which has made money on 48 out of 50 trades this year!

King Dollar: Up, Up and Away!

One of the few areas that have performed well is the U.S. dollar. Despite sharply lower interest rates, the current liquidity squeeze has been good news for King Dollar. According to a financial expert in The New York Times, “The American economy itself may look weak, but the dollar is still the most universally accepted means of payment and store of value.” 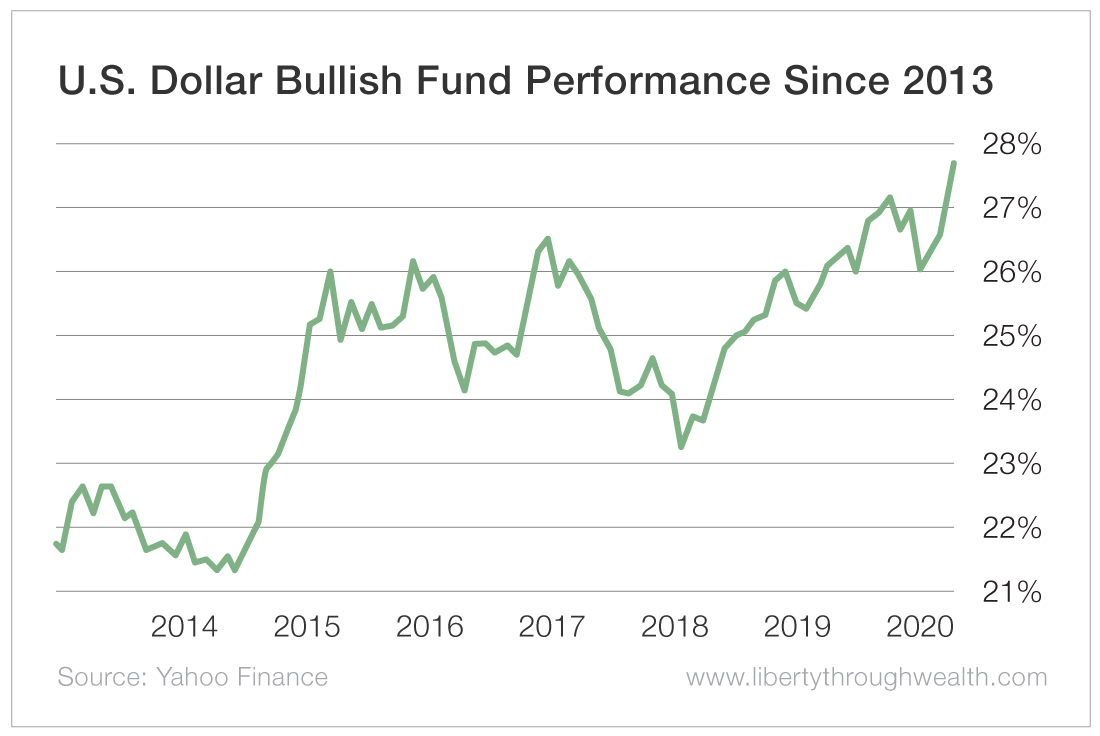 Against its rivals, including the euro, the pound and the yen, the dollar hit its highest level since March 2017 and has gained 7% in the past month.

It is achieving its biggest rising run since 1992 as the demand for funding has skyrocketed during the coronavirus crisis. After the European Central Bank announced a 750-billion-euro asset purchase program in response to the pandemic, the euro turned lower. It is now at a three-year low of 1.06 euros against the buck.

“Central banks are stepping up their liquidity actions, but it is not enough to make sure the dollar scarcity disappears, and as a result, the dollar continues to be the favored currency across the board,” said Manuel Oliveri, a currency strategist at Credit Agricole in London.

Stock Index Annuities: A Conservative Way to Invest in Stocks With No Downside Risk!

Finally, let me mention a strategy that I’ve advocated for years for conservative investors and retirees who can’t afford to lose their principal: stock index annuities. My wife bought stock index annuities right before the 2008 financial crisis and has doubled her money – and won’t lose any this year.

Stock index annuities are issued by insurance companies. They guarantee your principal every year. If the market drops 30%, you lose nothing.

What’s the catch? In most cases, the contract limits your upside when stocks go up. For example, Lincoln Life offered a 50% participation rate on the upside. If the S&P 500 rose 30%, you’d have profited 15%. (Due to the high demand for its index annuity, it just cut its participation rate to only 20%. So I’m not recommending that one right now.)

How do insurance companies offer this guarantee without losing money? Traditionally they hedge their positions by purchasing 70% to 80% in high-grade bonds and government securities, and then invest 20% to 30% in stock index call options.

Most insurance companies will probably be following Lincoln’s example and cutting their participation rates soon. So if you are interested in investing in stock index annuities, I suggest you call Todd Phillips, Estate Planning Specialists, now, toll-free at 888.892.1102.

The Calming Influence of The Maxims of Wall Street

I’ve received several letters from investors lately who say that reading quotations from The Maxims of Wall Street (such as the ones I’ve shared in this column) has been comforting in these trying times. I’ve been around the markets since the 1970s and have endured many crashes and busts. It never gets easy.

As Steve Forbes says, “Everyone is a disciplined, long-term investor… until the market goes down!”

Plus this quote from Alexander Green: “It’s tough to catch the train after it has left the station.” He considers my book a “classic.”

If you want a copy of the new seventh edition and special pricing for my readers, visit www.skousenbooks.com or call Harold at Ensign Publishing at 866.254.2057.

I know subscribers who have a copy on their nightstand. It is a good source of wisdom for everyone who is staying at home these days.

As Dennis Gartman says, “It’s amazing the wisdom one can gain from just one line in your book. I read it every day.”