Lessons From the Decline and Fall of the Roman Empire

I’ve been watching a course on the English historian Edward Gibbon’s six-volume magnum opus, The History of the Decline and Fall of the Roman Empire, in The Great Courses.

I view it as a 30-minute daily antidote to the relentless onslaught of COVID-19 body counts on the world’s news channels.

It’s also a welcome break from the nonstop obsession over “whether the market has bottomed this week.”

Gibbon published the first volume of his masterwork in the fateful year of 1776. This was the same year that his friend Adam Smith published The Wealth of Nations. It was, of course, also the year the American colonies declared their independence from the British.

The impact of Gibbon’s work extended far beyond his lifetime. Winston Churchill read Gibbon while he was stationed in India. He credits Gibbon with inspiring the unique style of his speeches and writings.

First, his history of the Roman Empire provides far more than just a collection of dates and names. It illustrates through stories how in the realms of politics, ambition and human failings, there is little new under the historical sun. Much of what he writes is eerily familiar. Only the names and locations have changed.

Second, Gibbon reminds us of the transience of all empires and the great men who lead them. As the Latin phrase goes, sic transit gloria mundi (“thus passes worldly glory”).

Third, Gibbon’s work provides insights into the history of the United States. It reminds us of the remarkable advantages the U.S. has enjoyed – geographical, cultural and economic – that propelled this then-young nation to the heights of economic power.

The Cradle of Western Civilization

Studying the lessons of history is great. But experiencing it is even better.

In 2009, I traveled the Eastern Mediterranean on a cruise with my Liberty Through Wealth colleagues Alexander Green and Mark Skousen on a “Cradle of Western Civilization” tour. 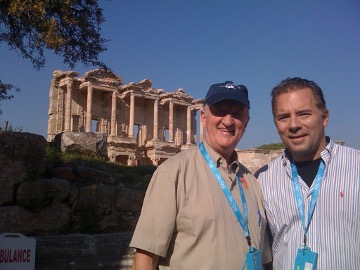 Mark Skousen (left) and Nicholas Vardy (right) at the Library of Celsus at Ephesus in Turkey.
The history of the Eastern Mediterranean covers everything from the ancient pharaohs, ancient Greeks and Roman Empire to the battleground of Judaism, Christianity and Islam.

To travel in the Eastern Mediterranean is to be bombarded with names, dates and places that sound familiar – from Aries to Apollo, Jesus to Job, Hercules to Hera, and Plato to Poseidon. The endless tales of philosophers, mythologies and empires come and gone in this culturally rich region are often overwhelming.

Whether you study Gibbon or travel the Eastern Mediterranean, you come to appreciate the transitory nature of human achievement.

The region boasts a long history of dozens of empires, big and small, many of which lasted longer than the mere 244 years that comprise U.S. history. Each empire had its heroes – its George Washingtons, Thomas Jeffersons and Benjamin Franklins – and even its version of the Declaration of Independence.

Yet evidence of most of these empires has been all but wiped off the face of the Earth.

We visited the famous library in Alexandria, Egypt. Once the world’s biggest library, its collection of books was the greatest record of human achievement to that date. Burned down by Muslim invaders in A.D. 642, the collective human wisdom was reduced to six months’ worth of fuel for the local baths. Today, the destruction of the library at Alexandria is little more than an answer to a Trivial Pursuit question.

I couldn’t help but picture tourists 1,000 years in the future walking through the remains of the Harvard campus. Tour guides regale them with stories of how this ancient, wealthy academy of learning once educated the now nameless elite of the then-great American empire.

Former President Bill Clinton once observed that he’d consider himself lucky if 500 years from now anyone even remembered his name. If you think that’s fanciful, try naming a political leader of your home country, or any country, in 1520 – precisely 500 years ago. (This was just 28 years after Columbus discovered America.)

I recall reading, about 10 years ago, that a mere 45 years after Winston Churchill’s death, 60% of British teenagers did not know who he was. Instead, most associated the name “Churchill” with a cartoon bulldog in an insurance advertising campaign.

The United States: A Lucky Country

The Eastern Mediterranean is very much rooted in the conflicts of the past.

Virtually every holy locale we visited in Jerusalem was the third or fourth one on the site. The previous sites had been destroyed by long-forgotten religions and conquerors over the last 2,000 years.

Today, Jesus’ birthplace in Bethlehem is barricaded behind the equivalent of a Berlin Wall in a Palestinian settlement. The grievances that led to this are as alive today as if they’d happened yesterday.

All this highlights why the U.S. is indeed a lucky country.

Touring the Eastern Mediterranean makes you appreciate the “blank slate” the North American continent offered for the emergence of the United States.

The native populations of America were easily outgunned. The most advanced civilizations of Central America quickly succumbed to pandemics. Whatever was built in the future territory of the United States was created for the first time. No rival cultures could reassert themselves when the wheel of history turned in their favor.

Second, as a young country, the U.S. always benefited from historical amnesia.

In the United States, newspapers speak of “back in the 1990s” as if it were the distant past. The relentless focus on past injustices that characterizes today’s Jerusalem is unthinkable.

In the U.S., the most successful businessman of his age, Henry Ford, declared that “history is bunk.” And most Americans still agree.

This reluctance to engage with the past is also America’s remarkable strength.

The “unjust” outcome of the Civil War never motivated a disgruntled Southerner to blow himself up in a Manhattan deli in 2019.

You can say the same about history.

Amid the COVID-19-induced global lockdown, Gibbon’s historical perspective is rarer than ever.

My Simple System for Knowing When to Buy...

Meeting the Father of Modern Portfolio Theory: His...