How to Make a Fortune on an Average Stock

Let’s talk about a strategy that reduces your risk while optimizing your potential gains.

And it does all of this while shortening the amount of time capital is locked up in a single position.

If that sounds good to you, then you’re in luck. Because that’s what I’m going to cover today.

And to do so, we’re going to look at a very popular sector… video games.

I grew up playing them. I still play them every single day.

But my passion goes beyond just participating. Video game stocks are some of my favorite plays in the market.

In fact, across my various publications, I have open plays on four different video game and esports companies. And subscribers are sitting on gains ranging from the single digits to more than 700%.

But few companies have rewarded me more over the years than Electronic Arts (Nasdaq: EA).

And soon you’ll see why.

A Dozen Wins and Counting

At the moment, shares of Electronic Arts are trading right around their 52-week high.

That’s better than the S&P 500 during that stretch, though it underperforms the Nasdaq… 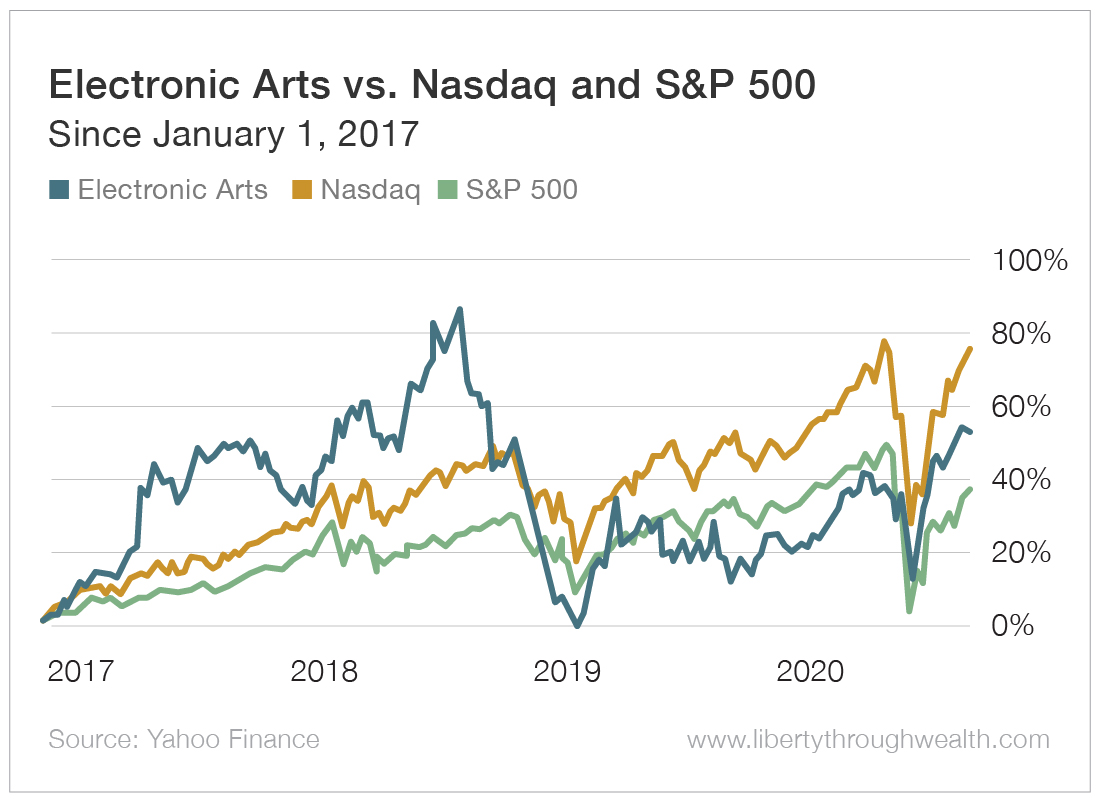 So, as a multiyear hold, the return was so-so.

But despite that lukewarm performance over the past several years, Electronic Arts has been not only one of my favorite stocks to trade but also one of my most profitable.

During that same stretch from 2017 to today, I’ve closed 12 winners on Electronic Arts.

I did have two losses. No one bats a thousand. But I did have 10 consecutive wins. And seven of my total wins were for gains of 100% or more, with three gains of more than 450%.

That also doesn’t include my current positions in Electronic Arts. My readers are up more than 25% on the shares (more than double the year-to-date return) and have a triple-digit gain on the call options.

With a dozen wins under my belt from just one company, it’s easy to see why Electronic Arts is one of my favorite plays.

So, now, the all-important question: How did I accomplish this?

Focus on the Best… Forget the Rest

For the past seven years, I’ve been running one of the most successful investment services out there. It’s built on this basic premise…

Shares of most companies move asymmetrically.

That means, within a given year, there are blocks of months when shares will perform well – sometimes even exceptionally well. And there are other months when they won’t.

It’s not random either.

It’s usually the same months each and every year.

And more often than not, that relates back to the company’s underlying business, revenue and earnings.

That’s because most businesses are cyclical or seasonal. And in seasonal trading – which is what I excel at – all I want to do is focus on a company’s best months of the year and forget the rest.

That’s how we can consistently score big while limiting our downside risk.

So let’s look at the best and worst months for Electronic Arts shares over the past five years. And you’ll see why I always buy June calls… 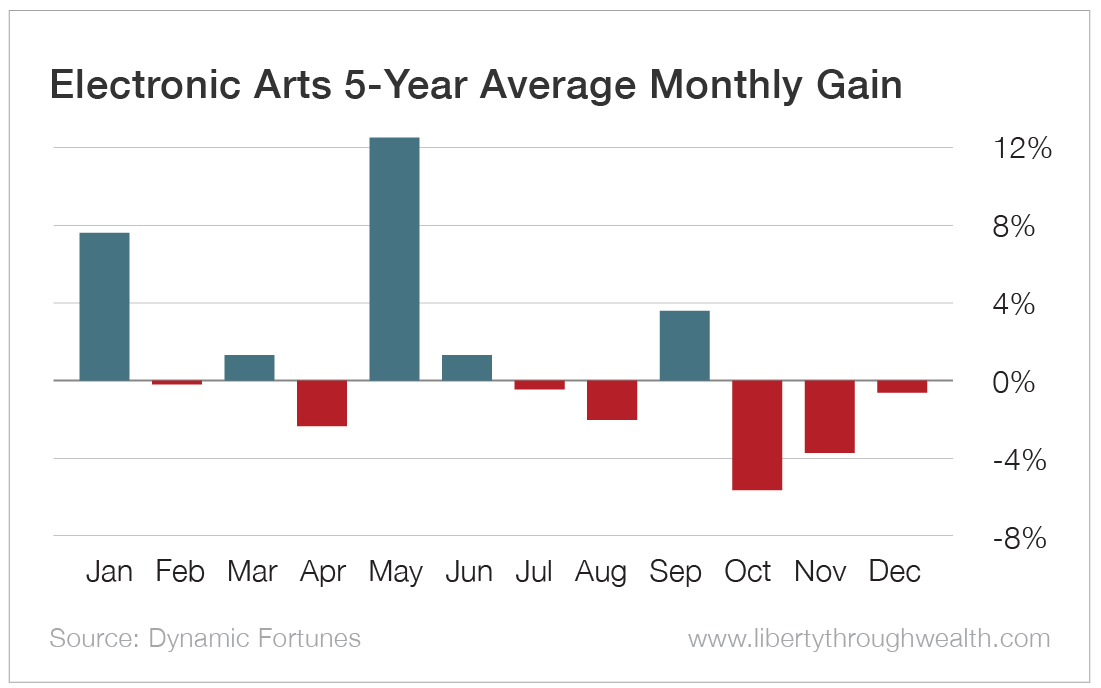 Right off the bat, it’s easy to separate the best from the worst.

In January, over the past five years, Electronic Arts shares have averaged a 7.58% gain. And in May, they’ve averaged a 12.14% gain.

Those are the best months.

We also see that August, October and November are consistently down months. More importantly, from July through December, there’s a sea of red.

That’s the “rest.” We don’t care about those months.

In fact, as a seasonal trader on Electronic Arts shares, I root for them to fall during that stretch. I want analyst downgrades… I want misses on earnings… I want experts to give a thumbs-down to its video game launches.

The cheaper Electronic Arts shares get, the happier I am when I start targeting the company at the end of December or early January.

And these best and worst months are predictable every year. They aren’t random…

Electronic Arts shares always have a tailwind heading into January.

Because what kid – or, uh, middle-aged adult – doesn’t want video games for Christmas?

At the end of January, the company always reports third quarter results. This is its most profitable quarter of the year.

Then, in May, the video game publisher reports fourth quarter results. This is the company’s second most profitable quarter, but it’s the best-received report by investors.

In fact, over the past 10 years, Electronic Arts shares have seen an average one-day pop of 5.4% on these results. Five times over the past decade, they’ve jumped 8.8% or more. And that contributes to the big average gain shares see in May.

Now, when we look at Electronic Arts’ earnings and revenue, we see what I call a “sawtooth” pattern. This means it’s uneven, with big jumps and drops. But that pattern repeats over and over, like the blades of a saw.

In turn, we see that shares tend to mimic these ups and downs… 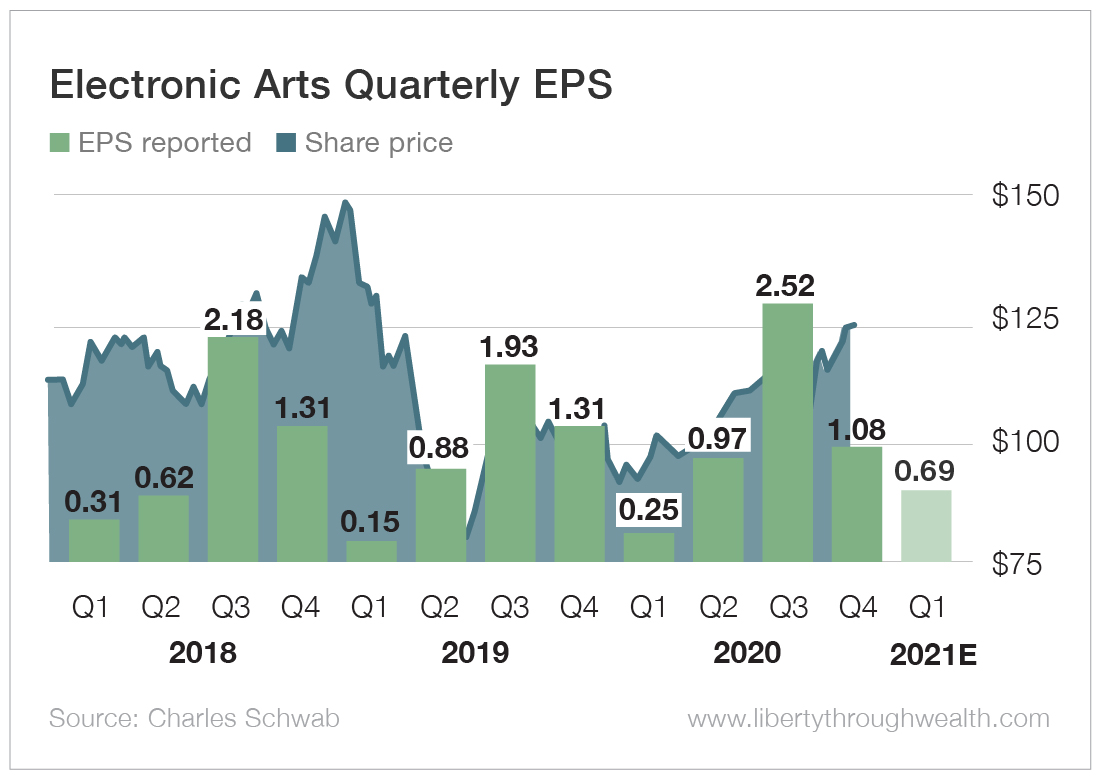 That is what I take advantage of each year in Electronic Arts shares.

I start looking for an entry point at the end of November or December and start buying calls out to June.

It’s why I’m looking at more than a dozen wins from this one company.

And even better, there are dozens of opportunities like this throughout the year.

Seasonal trading is one of the easiest and quickest ways to score big gains. We focus only on the best and ignore the rest.

That means your holding periods are usually only a few months, allowing you to maximize your upside while reducing your overall risk.

And that’s how you generate new high scores for your portfolio!