This quote from Charles Dickens’ novel set in the time of the French Revolution sums up well investor sentiment in the energy sector in 2020.

We have seen peak oil consumption.

The traditional oil and gas industry is on its last legs.

Ditto for legacy automobile companies whose fate has been tied to Big Oil for more than a century.

Meanwhile, the alternative energy sector is just coming of age.

The plan of action for investors could not be more straightforward.

And pile into the red-hot alternative energy stocks.

Whenever I come across a narrative this one-sided, my contrarian instincts nudge me to consider the opposite point of view.

“It Was the Best of Times…”

The outlook could hardly be better for investors in alternative energy.

After all, electric vehicles (EVs) will supplant gasoline-powered vehicles within the next decade or so.

Britain has done something similar this week, moving the date up to 2030.

In many ways, the EV revolution is already here.

Just this past weekend, I noticed the bus I got on in London is made by BYD – the Chinese automaker that technophobe Warren Buffett is betting on.

This ETF is a one-stop shop to invest in red-hot EV stocks like Tesla (Nasdaq: TSLA) and Nio (NYSE: NIO) as well as solar plays like SolarEdge Technologies (Nasdaq: SEDG) and Enphase Energy (Nasdaq: ENPH).

“It Was the Worst of Times”

This bullishness stands in stark contrast to the performance of traditional energy stocks.

Energy has been by far the worst-performing stock market sector in the U.S. this year.

Near the market bottom, the combined market cap of companies in the S&P 500 energy sector index almost halved since the start of 2020.

Demand for oil remains far below where it was a year ago. In April, the price of oil even briefly fell below zero.

The chart below compares the performance of the Energy Select Sector Fund with that of the First Trust Clean Edge Fund in 2020. 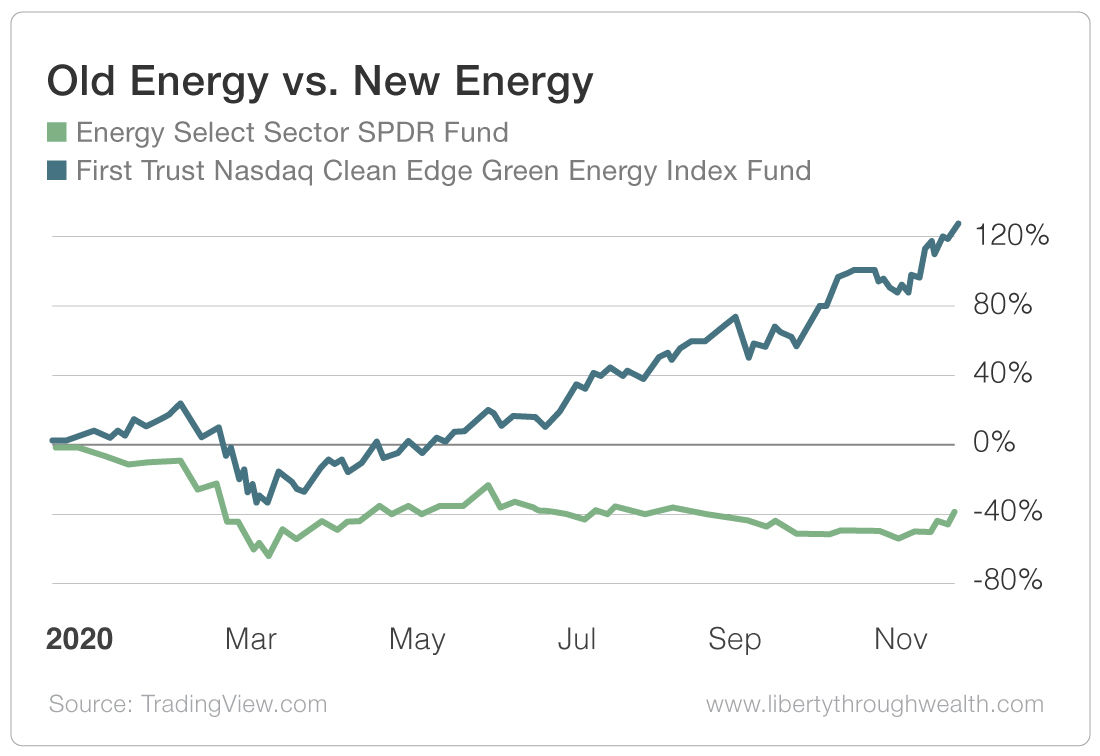 And for most investors, this chart is all they need to do the obvious: Invest in the First Trust Clean Edge Fund and avoid the Energy Select Sector Fund.

Alas, my contrarian instincts tell me to look in the opposite direction.

Traditional energy stocks are as cheap as they have ever been.

SentimenTrader recently pointed out that 470 out of 663 U.S.-listed stocks in the energy sector have a share price under $5. That’s more than 70% of stocks in the sector!

In the past 20-plus years, no other energy bust has seen more than 65% of these firms with a share price under $5.

There were only four other times when more than 55% of energy companies were trading below $5.

“They never ring a bell at the top of a market” is an old Wall Street adage.

But the announcement of Tesla’s entering the S&P 500 Index at the end of December might be close enough.

By any conventional measures, Tesla is not an automobile stock.

Nor is it a tech company.

No, Tesla is a religion.

And the First Trust Clean Edge Fund trades at a P/E of 316!

Meanwhile, the Energy Select Sector Fund has a P/E of negative 5.29!

Such disparities in valuation are unprecedented in my investment career.

Based on my reading of financial history, I expect the plot to unfold as follows…

Investors will embrace clean energy as the future with clarion calls of “This time it’s different!”

Investors will bid up shares in the chosen sector to absurd levels.

Analysts will justify these off-the-chart valuations with newfangled metrics.

Inevitably, the stocks will come crashing back to earth.

And savvy investors will make money on the way up and on the way down.

That’s precisely how I intend to play both clean and traditional energy stocks.

The End of Value Investing?

The Next Big Tech Boom Is Happening Right...