Unprecedented Money Printing Will Benefit One Asset Class Most

Most people already know about the massive amounts of money the Fed has injected into the market in recent years.

But few people understand just how big it has really gotten.

Since December 2019, the Fed has put in more than $11.2 TRILLION. And more comes in every single day.

Most of us understand that printing endless amounts of money decreases the value of the dollar and drives the cost of consumer goods through the roof.

The consumer price index, which measures the prices we pay for goods and services, has gone up more than 200% since 1990.

It’s called inflation… And it’s only going to get worse.

Federal Reserve Chairman Jerome Powell has repeatedly said he wants to do everything he can to keep inflation at least at 2%.

He doubled down on this promise as recently as March 4.

Now… What do most people tell you to do to protect the value of your savings when the government is printing money?

They start talking about buying gold.

Makes sense. While inflation rose 200% since the 1990s, gold – a traditional inflation hedge – has gone up more than fourfold. That definitely outpaces inflation.

However, bonds have done a little better, increasing 570%.

But one asset class has done even better than gold, bonds and Treasurys. It’s gone up 2,039% in the same time frame.

In fact, over the last 200-plus years, stocks beat every other investment, even during times of runaway inflation. 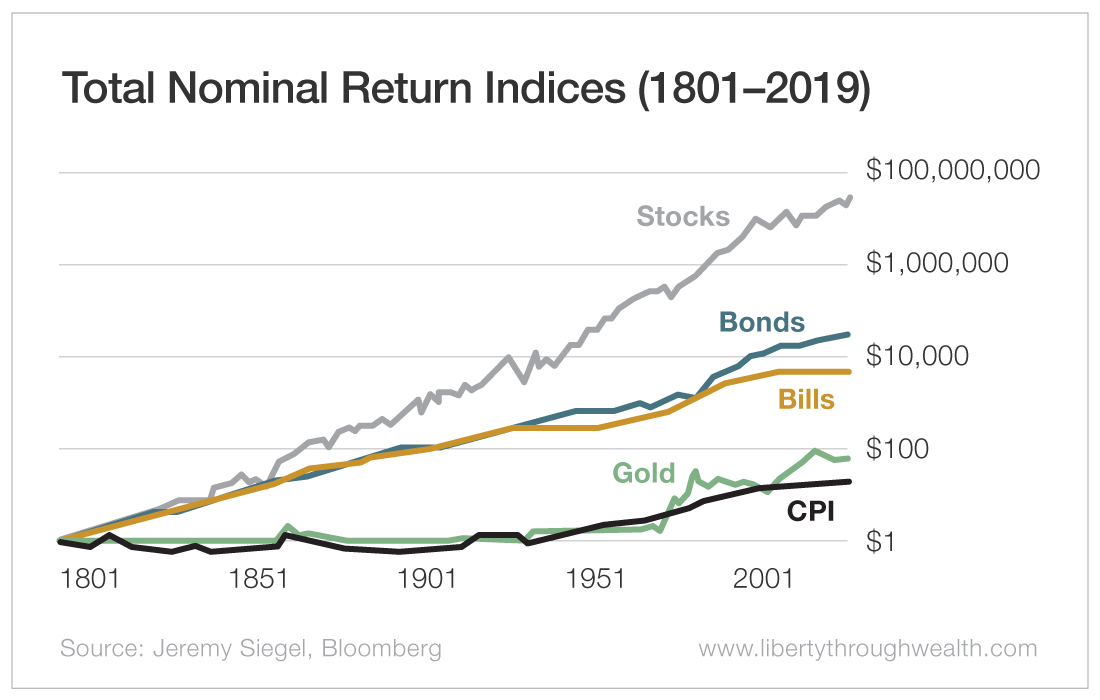 Stocks are the No. 1 way to protect yourself and grow your money when the government pumps trillions of dollars into the economy.

With the accelerated money printing in the wake of COVID-19, stocks are going to rise faster than they ever have before.

It’s a market phenomenon I’m calling the “Great Stockflation.” And it’s going to dwarf the rallies we’ve seen in the past.

How do I know? It’s just a matter of knowing the history.

The Wealth-Generating Power of Stockflation

And the Fed, led by Alan Greenspan at the time, started lowering interest rates to boost the economy.

As a result, it injected $360 billion into the economy through 1994 – a tiny sum by today’s standards.

That’s what a cash injection into the market does… It creates rapid and prolonged stockflation that rewards investors.

The same thing happened during the recession of the early 2000s. The dot-com bubble was already stressing the market. Then September 11 happened and the U.S. markets crashed.

Once again, the Fed injected close to $300 billion through June 2004 (another small sum compared with what’s going on today).

But again, this sent the Dow climbing to another milestone, this time surpassing 10,000.

But the biggest injection of money was still to come…

But it didn’t stop there. This time, the Fed didn’t settle for just recovering from a crash. Instead, it actively drove stock prices higher for years.

Massive quantitative easing and 0% interest rates kept pouring money into the economy for a decade.

But what it did back then is child’s play compared with what it’s doing now.

In 2020, any appearance of restraint went completely out the window.

In just a few months, the Fed infused another $2.2 trillion directly into the market.

That’s 12 years’ worth of additional money for the economy, pumped in over a matter of months.

At the same time, it’s loaned billions of dollars to Wall Street firms every single day – totaling $9 trillion – since December 2019.

That’s more money than the U.S. has produced in the last 200 years!

And it’s not even over… Morgan Stanley says the money printing won’t peak before the end of 2022, when the balance sheet hits almost $30 trillion.

At the same time, the government has basically devastated alternatives to stocks, like savings accounts, CDs and bonds.

The average savings account now pays 0.2%. It would take 360 years to double your money at that rate.

I guess you could try one of those options, if you want to wait 29 years for your money to double.

Or you can invest in stocks – the one asset that’s generating record returns because of the massive stockflation driving prices up.

(This is why we’ve seen a record number of accounts opened on Fidelity, E-Trade, Robinhood and other brokerage firms this year.)

Investors are pouring money into stocks… which just adds more fuel to the stockflation fire. As a recent Nasdaq article put it…

Investors, heeding the dollar’s gradual decay, are pouring more money into the stock market… With additional helicopter money to come, this bullish bias is bound to continue.

Thanks to the Fed, stimulus packages from Congress and a wave of new investors, I believe that not only is stockflation here to stay – but it’s about to drive stock prices to even bigger highs.

If you’re wondering how the rich seem to keep getting richer and leaving regular people behind, it’s because of one thing: They know how to harness the power of stockflation.

Yours in smart speculation,