How to Profit From the Looming Collapse of China

Editor’s Note: In today’s article, Nicholas Vardy shares why betting against China may be the best way to play this foreign market as recent polices have further imploded the Chinese economy.

But if you’re looking for a bet closer to home, Alexander Green recently discovered a little-known company that only recently went public and is already taking in tens of millions of dollars… and is poised to take in billions of dollars more in the near future.

Investors such as the Bill & Melinda Gates Foundation, the investment giant Fidelity, and fund manager Baillie Gifford have even poured in more than $400 million.

The stock is trading for well under $10, and management estimates that sales will increase another 33% to 41% this year.

Learn more about the stock that could be your ticket to major gains in 2022 and beyond.

The tech-heavy Nasdaq has tumbled 21%.

Yet there is another collapse on the other side of the world that few in the media are talking about.

And that is the collapse of the Chinese stock market.

China’s zero-COVID policy has pushed its CSI 300 benchmark down over 8% in April alone – its steepest monthly loss in six years.

As a result, global investors are abandoning China in droves. Foreign investors’ holdings of China stocks have fallen by about $4 billion year to date.

Even Charlie Munger – a longtime China bull – recently halved his controversial bet on Chinese internet giant Alibaba (NYSE: BABA) – an investment I’ve criticized in the past.

China’s policymakers are scrambling desperately to talk up the market.

But don’t be fooled by their empty promises.

Weighed down by the biggest real estate bubble in history, the Chinese economy is imploding.

And even worse, China’s leaders are too arrogant to do anything about it.

I believe China’s economy will get a lot worse before it gets better.

Back in the first quarter of 2020, the Chinese government was happy to trumpet its success in controlling the spread of COVID-19 with its severe zero-COVID strategy.

But China’s policy has gone from hero to zero with remarkable speed.

In addition, Chinese vaccines turned out to be far less effective than their Western counterparts at combating the virus. And vaccine hesitancy has left a vast portion of China’s population without any natural immunity from COVID-19.

As a result, the Chinese government has doubled down on its authoritarian instincts and locked down large chunks of the country (and economy), much as it did two years ago.

Shanghai – the country’s largest port and financial center – has become the poster child for the latest round of harsh lockdowns.

Many of Shanghai’s 28 million residents have been confined to their homes for five weeks.

Robot dogs police the streets. Drones in the sky track the movements of Shanghai’s citizens, urging them to “Please comply with COVID restrictions. Control your soul’s desire for freedom. Do not open the window or sing.”

Meanwhile, many Shanghai families struggle to obtain food. The elderly have been denied medical care.

Young children have been separated from their parents.

Fears are growing that Beijing’s 22 million residents are next.

China’s zero-COVID policy and its consequent dystopia have spurred comparisons to the Cultural Revolution of the 1950s. Tens of thousands of Chinese have been sent to makeshift quarantine camps.

“Zero COVID” has morphed into a Mao-style political campaign based on one person’s will – President Xi Jinping.

Meanwhile, China’s refusal to import Western vaccines or treatments means that no end is in sight.

No. 2: The Collapse of Chinese GDP Growth

China’s current GDP growth target is already a modest 5.5%. But this number is likely to fall further as lockdowns continue.

J.P. Morgan suggested that its latest forecast of 4.6% means that China could significantly undershoot its growth goal for the first time since the 1990s.

Lockdowns in China have pulled the rug out from under the economy. Factory production has tumbled. Even Tesla’s Gigafactory shut down for a few weeks in March and April. Home, car and even excavator sales – a leading indicator for construction rates – have all plummeted.

With the Shanghai port shut down, supply chain issues will reverberate throughout the globe. “Made in China” was once synonymous with “cheap” goods. Today it’s becoming synonymous with “scarcity.”

Add to this the slow-motion collapse of China’s $55 trillion real estate bubble and China’s GDP growth rates, and its stock market will continue to plummet.

No. 3: The Hubris of the Chinese Communist Party

Western observers have long admired – and even envied – China’s leadership.

After all, the Chinese Communist Party (CCP) transformed an economically backward nation into the world’s second-largest economy in just 30 years.

But Xi’s authoritarian government’s zero-COVID policy has tarnished that reputation in a matter of months.

As Warren Buffett observed, “It takes 20 years to build a reputation and five minutes to ruin it.”

China’s Politburo, the CCP’s decision-making body, promised to “strengthen macro adjustments” and “achieve full-year economic and social development goals.” It also said it would ensure the stable and healthy operation of capital markets.

Premier Li Keqiang has suggested that “pro-growth measures should be brought forward and accelerated, including tax and fee cuts” and that local governments should “tailor targeted supportive measures according to local conditions.”

These are all fine words. But follow-through has been lacking.

China has become the boy who cried wolf, and few observers are taking its empty promises seriously.

China’s adherence to a zero-COVID policy has revealed both hubris and obsession with control on the part of Xi and the CCP.

Xi, in particular, has appeared to be both tone-deaf and ignorant of conditions in China’s economy.

In a recent televised address, Xi did not even mention the intensifying COVID-19 outbreaks. Instead, he focused on how “the fundamentals of the Chinese economy – its strong resilience, enormous potential and long-term sustainability – remain unchanged.”

Both Xi and the CCP reflect an authoritarian system that is too arrogant to admit when it is wrong.

What does all this mean for investors?

Many of the world’s hedge funds are now betting on the continued collapse of China’s stock markets.

You can do the same with the Direxion Daily CSI 300 China A Share Bear 1X Shares (NYSE: CHAD), which seeks a return that is 100% of the inverse return of its benchmark index.

Put another way, this ETF goes up when the CSI 300 Index goes down.

And as the chart below confirms, betting against China in 2022 has been a far more profitable bet than investing in the S&P 500. 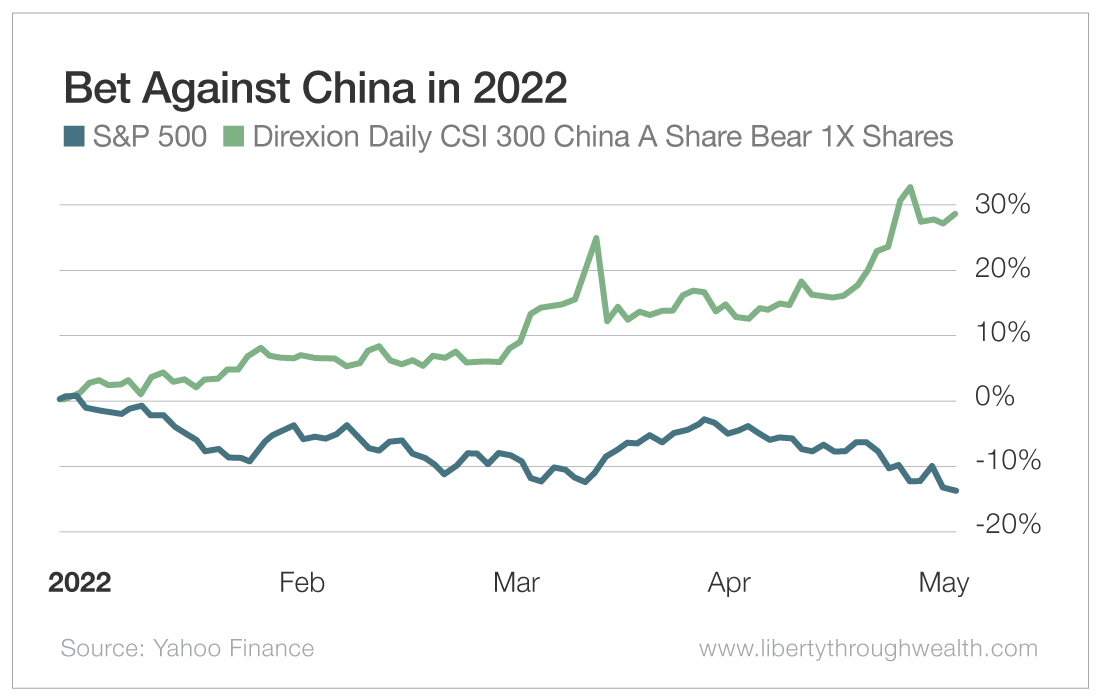 Smart investors are betting that the collapse of China’s economy is set to continue.

I recommend you do the same.