In today’s article, Nicholas Vardy states that even the most brilliant people in the world can fall for financial bubbles. It’s a good reminder that your investments should be backed by legitimate businesses and a strong management team.

Well, Alexander Green recently discovered a little-known company that only recently went public and is already taking in tens of millions of dollars… and is poised to take in billions of dollars more in the near future.

The Bill & Melinda Gates Foundation, the investment giant Fidelity and fund manager Baillie Gifford have even poured in more than $400 million.

It’s been a heckuva ride…

This era will go down in financial history as the era of a bubble in bubbles.

The plot of financial bubbles is remarkably predictable.

Skeptics are dismissed as fuddy-duddies. Even the smartest of the smart get caught up in the frenzy.

Memories fade and a new financial generation invariably repeats the cycle with some new idea or technology.

Merriam-Webster defines a bubble as “a state of booming economic activity (as in a stock market) that often ends in a sudden collapse.”

Yale professor Robert Shiller famously predicted three of the biggest bubbles of our time: the dot-com bubble, the housing bubble and the crypto bubble.

He focuses on the narratives surrounding bubbles – the stories we tell each other, which take on a life of their own.

Shiller has described bubbles as “a mental illness” with the following characteristics:

You can take this framework and apply it to the bubble of your choice.

And history is littered with colorful stories of financial bubbles, their reckless promoters and the sky-high valuations these assets reached.

The Biggest Bubbles in History

The most famous bubble is probably the Dutch “tulip mania.” In 1637, the price of a single tulip skyrocketed to the value of a house on the shores of Amsterdam’s famous canals.

There are, of course, other bubbles that occurred in today’s investors’ lifetimes.

The Japanese real estate bubble peaked in 1989. That year, the land under the Imperial Palace in Tokyo was worth more than the state of California.

The dot-com bubble burst in March 2000. Before it was over, tech stocks lost $5 trillion of their value.

That was the equivalent of half of the U.S. GDP that year.

But the bubble that triggered the biggest social and political impact was England’s South Sea Company bubble of 1720.

After all, it was the bubble that gave us the word “bubble.”

The South Sea Company was founded in 1711 to trade with Spanish America following the War of the Spanish Succession.

After floundering for nearly a decade, the South Sea Company saw its fortunes turn in 1720.

The company assumed the national debt Britain had accumulated during its expensive military campaigns.

In exchange, the government received shares in the South Sea Company.

South Sea share promoters made sure leading British politicians did whatever it took to inflate the stock price. They did this by giving politicians shares, which made them rich.

In turn, the British Parliament granted the South Sea Company a monopoly on a potentially lucrative trade with South America.

Promoters launched many other speculative ventures on the London Stock Exchange.

One company raised money to manufacture a gun that fired square cannonballs.

Another company raised money to harness energy by reclaiming sunshine from vegetables.

There was even a company that was founded to “carry on an undertaking of great advantage, but nobody to know what it is.” The founder collected 2,000 pounds for the share offering. But unfortunately, he disappeared the next day and was never heard from again.

It was at this time that investors began to use the word “bubble.”

The South Sea Company’s share price rose dramatically, from 128.5 pounds in January 1720 to more than 1,000 pounds in August.

The South Sea Company’s management began quietly selling shares at the height of the market.

It knew earnings would be abysmal. And the promise of massive profits from a new thriving South American trade route failed to live up to expectations.

After all, the managers of the South Sea Company lacked any shipping and trading experience.

They may have sold shares from offices whose opulent furnishings hinted at the profits investors could make.

But in the end, they were simply shrewd stock promoters.

By December, the shares had tumbled back down to 124 pounds.

After the crash, Parliament launched an inquiry.

As a result, several high-ranking officials – including the chancellor of the exchequer, the postmaster general and several heads of ministries – were thrown in jail.

In the end, the collapse of the South Sea bubble took down the entire British government.

That’s the equivalent of President Joe Biden being forced out of office, and both Fed Chairman Jerome Powell and Treasury Secretary Janet Yellen ending up in jail.

Investors from all walks of life bought and sold shares in the South Sea Company. Among them was a scientist named Sir Isaac Newton. 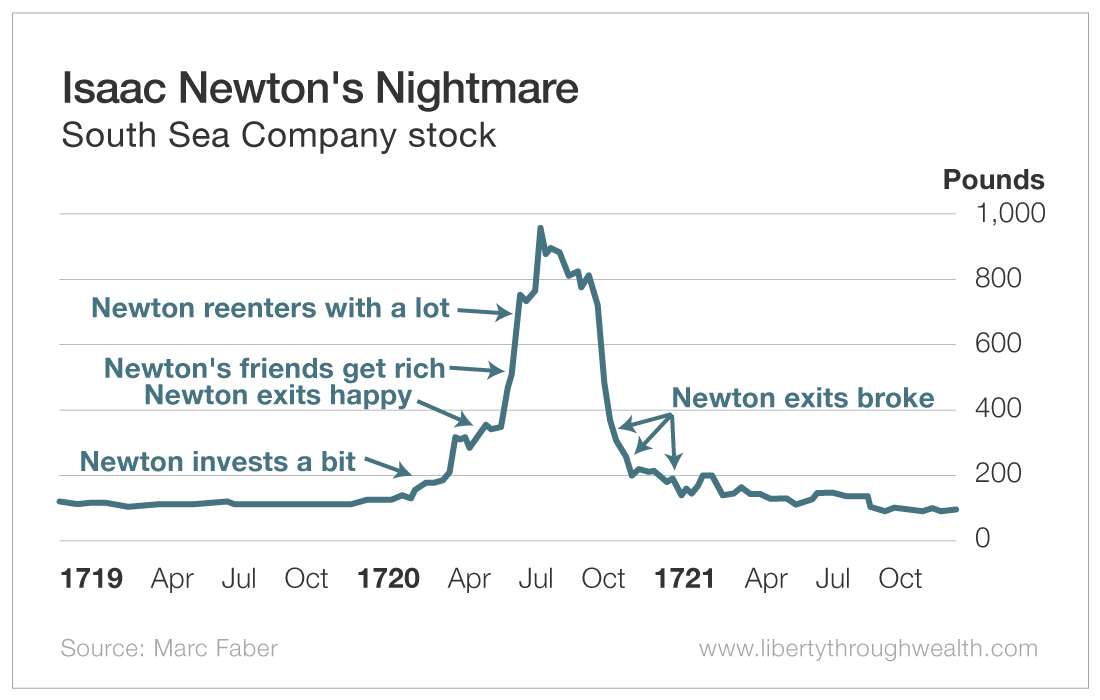 This chart shows how Newton made money in the South Sea Company bubble and later lost far more.

Newton’s experience of investing in a bubble serves as warning to all investors.

Do you really expect to do better on any current or future financial bubble?

So stay away from all financial bubbles – whether you bet on them or against them.

As a frustrated Newton put it, “I can calculate the movement of the stars, but not the madness of crowds.”

When Will We Hit Peak Inflation?