This year’s treacherous markets are a vivid reminder that we live in an uncertain world.

Economies expand and contract. Interest rates rise and fall. Markets gyrate up and down.

And nobody gives you a warning ahead of time.

It’s a bit unsettling, especially when your life savings are on the line.

Wouldn’t it be great if you could bulletproof your investments, so you’re prepared for whatever the future holds?

In fact, you can. You need only follow 10 battle-tested principles that have stood the test of time…

1. Don’t try to forecast the economy.

The national and global economy today is too big, dynamic and complex for anyone – from corporate executives to central bank presidents – to accurately predict.

So if you’re running your portfolio based on someone’s guess about how long the economic expansion will last or when the next recession will arrive, you’re already off on the wrong foot.

Twice a year, The Wall Street Journal polls 55 of the nation’s leading economists and asks what lies ahead for the economy, interest rates, inflation and the dollar. Most are way off. (Their consensus isn’t so hot either.)

It’s gotten to the point where even The Wall Street Journal staff is in on the joke. Reporter Jesse Eisinger writes…

Pity the poor Wall Street economist. Big staffs, sophisticated models, reams of historical data, degrees from schools known by merely the name of the biggest benefactor, and still they forecast about as well as groundhogs.

Punxsutawney Phil may actually have an edge on most of them.

It seems so easy when you look at a chart of past bull and bear markets. If you’d only gotten in down here and then out somewhere up there and then back in around here. 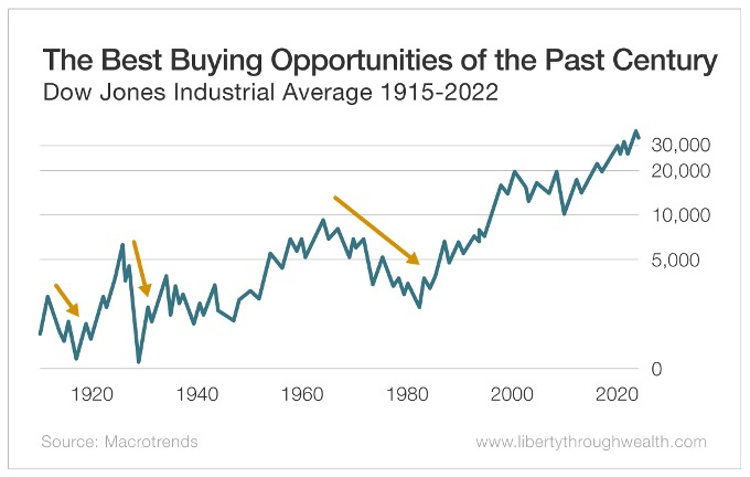 As they say in New York, “Fuhgeddaboudit.”

To try to switch into the market for the rallies and out for the corrections – or just call the major turns every decade or so – is a waste of time and money.

It can’t be done.

Sure, anyone can make a good call. (And don’t think they won’t keep reminding you.) But to successfully time the market you have to make at least three: You have to buy at the right time, get out at the right time and then buy back in at the right time. Otherwise, the plane will leave you at the airport… since the long-term direction of the stock market is up.

Vanguard founder Jack Bogle calls market timing “the loser’s game” and adds, “After nearly 50 years in this business, I do not know of anybody who has done it successfully and consistently. I don’t even know anybody who knows anybody who has.”

The 2022 Retirement Confidence Survey revealed that millions of Americans are woefully unprepared for retirement. The single biggest reason is they haven’t saved enough.

Millions of Americans today believe the government will deliver the material happiness they deserve, sparing them the trouble and discomfort of striving.

Unfortunately, the average retired worker receives just $1,669 a month from Social Security. (If you include spousal benefits, it climbs to $2,509.)

To ensure a comfortable retirement, you need to save as much as you can, for as long as you can, starting as soon as you can.

Asset allocation is the process of finding the optimal mix of investments for your portfolio.

I’m not talking about which securities you buy. Asset allocation refers to how you divide your assets among stocks, bonds and other noncorrelated assets to give yourself the best chance of reaching your financial goals while taking as little risk as possible.

Asset allocation is your single biggest investment decision, responsible for approximately 90% of your portfolio’s long-term returns.

What is the best asset allocation? Opinions vary. But The Oxford Club’s recommended asset allocation is 30% U.S. equities (divided evenly among large cap and small cap stocks), 30% international equities (divided in thirds between Europe, Asia and emerging markets), 10% each in high-grade bonds, high-yield bonds and Treasury Inflation-Protected Securities (TIPS), and 5% each in real estate investment trusts and shares of gold mining companies.

This mix has outperformed the S&P 500 over the last 20 years while taking far less risk than being fully invested in stocks.

Each of these asset classes should generate returns that exceed inflation over the long haul. However, they won’t move in lockstep. And that’s a good thing.

Once a year – the date is not important – you need to rebalance your portfolio. That means returning the portfolio to its original percentages by selling back the asset classes that have appreciated the most and putting the proceeds to work in the assets that have lagged the most.

Doing this forces you to sell high and buy low. It adds about a point a year to your total return while also reducing your risk, since you are paring back on the assets that are most extended.

It may feel wrong to liquidate a portion of asset classes that have done well. (After all, with individual securities the goal is to let your profits run.) But asset classes move in unpredictable up and down cycles. Rebalancing allows you to take advantage of that.

In short, investors should ignore the siren call of market timers and economic forecasters, save more, asset allocate properly, and rebalance annually.

Covering these bases will keep you on track to reach your most important financial goals.

But if you really want to bulletproof your portfolio, there are five other steps you need to take as well.

I’ll cover that next week.