Is This the Start of the “Greatest Trade Ever”?

The U.S. housing market was on fire. “NINJA” loans – referring to No INcome, no Job and no Assets – were fueling the creation of $8 trillion in housing bubble wealth.

At first, John Paulson lost tens of millions of dollars as real estate and bank stocks continued to soar.

Paulson, however, doubled down on his contrarian bet, putting his hedge fund on the line.

By the summer of 2007, global financial markets had begun to implode.

By year-end, Paulson had earned himself and his investors more than $15 billion. That figure dwarfed George Soros’ $1 billion profit on his bet against the British pound in 1992.

A reporter from The Wall Street Journal dubbed Paulson’s bet the “greatest trade ever.”

If you can read a situation accurately, you can make a fortune even as financial markets implode.

The 10-year U.S. Treasury yield is the most important interest rate in the world.

Today’s conventional wisdom is that once the yield soars – and stays – above 3.25%, it’s time to declare the bull market over.

And last week’s sharp downward move in the $14 trillion U.S. Treasury market could signal the start of the next “greatest trade ever.”

First, a quick refresher on what drives bond prices.

When the U.S. government – or a company – wants to borrow money from investors, it issues a bond.

As a bondholder, you are entitled to an annual payment, or “coupon.” You also receive the face value of the bond back at the end of the loan period (the maturity date).

The value of that bond fluctuates with changing interest rates. When yields rise, prices fall, and vice versa.

Say interest rates rise to 5% and you want to sell your bond.

Here are three reasons why…

First, the U.S. economy is on fire. The economy grew at 4.2% in the third quarter. Consumer confidence is at an 18-year high.

And the U.S. Federal Reserve has embarked upon a series of well-telegraphed interest rate hikes to keep the economy from overheating. And as interest rates rise, U.S. Treasury prices fall.

When inflation rises, bond yields need to increase too. And to keep yields high, bond prices must fall.

Yes, headline inflation in the U.S. remains low. But anecdotal evidence suggests changes ahead. Amazon is increasing its minimum wage to $15 an hour. A U.S. unemployment rate of 3.7% may mean that the trend toward higher salaries is just beginning.

Finally, buyers of U.S. Treasury bonds are drying up.

The Fed raising interest rates, the threat of inflation and cutbacks in QE programs by central banks…

All point to rising yields and falling prices in the U.S. Treasury markets.

Today, you don’t need to be Hank Paulson or George Soros to profit from a crash in U.S. Treasury prices.

As the chart below confirms, the ProShares UltraShort 20+ has trounced the S&P 500 over the past month. 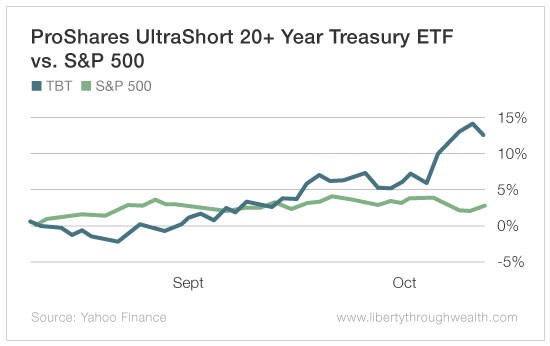 But let me leave you with a caveat…

The “smart money” has been short U.S. Treasurys for years.

Unlike Paulson’s bet against U.S. subprime mortgages, shorting U.S. Treasurys may be the most anticipated trade in history – it’s hardly a contrarian bet.

So does last week’s sharp move down signal the start of a sustained collapse of Treasurys?

It’s too early to say.

Shorting Treasurys is a trade that has “cried wolf” more times than any other I can think of.

Still, having ProShares UltraShort 20+ Year Treasury in your investor toolbox keeps you prepared for when the wolf actually shows up.

We Are All Winners!