Because Joe Biden is about to start the second half of his presidential term.

And the third year of presidential terms in particular – the year we’re about to begin – has been the best by far, with a 10.4% average gain in the Dow Jones Industrial Average.

By comparison, the fourth year has had a 6% average gain, the second year a 4% gain and the first year a 3% gain. 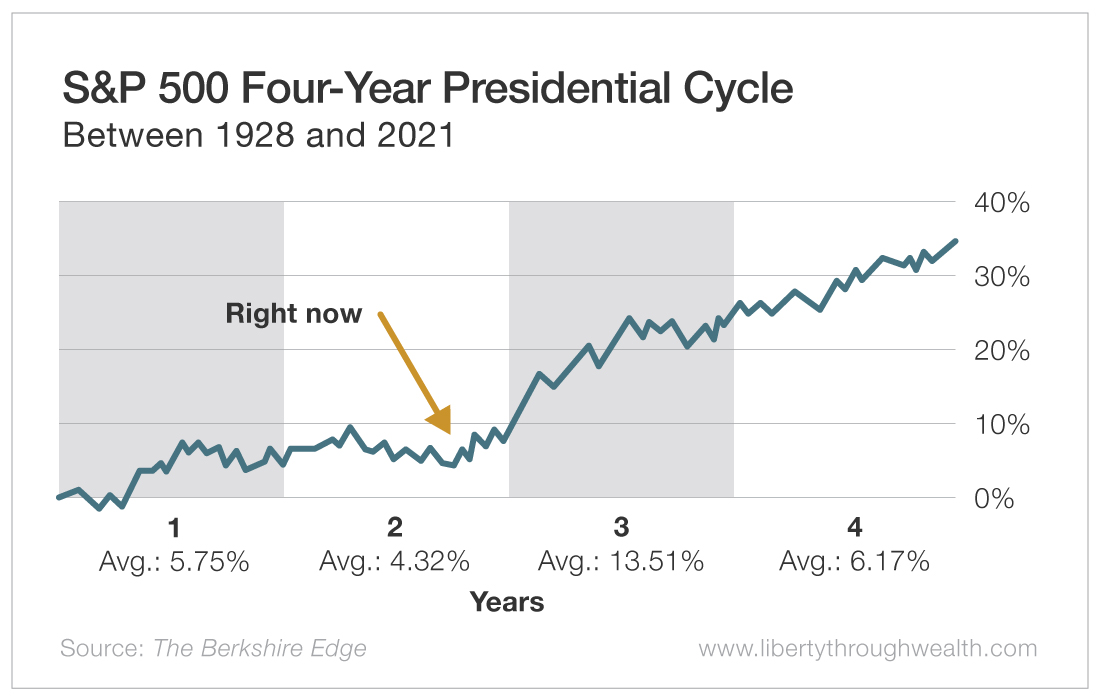 As you can see in the chart, the market typically rises in the first year of a president’s term and then begins to stagnate and decline in year two.

Then right around midterm elections, the market begins a steep ascent that continues through the end of the president’s term.

But what are the reasons for this pattern?

According to the Stock Trader’s Almanac, it’s due to the fact that wars, recessions and bear markets tend to start or occur in the first half of the presidential term. By contrast, peaceful and prosperous times characterize the second half.

This time around, instead of a war we had a global pandemic in the first year of Biden’s term. That led to too much stimulus spending and money printing by governments and central banks around the world – which in turn brought sky-high inflation and the Federal Reserve’s hawkish reaction to it.

Will History Repeat Itself?

Of course, there have been exceptions to this pattern. But the third year of almost every presidential term has been very good for investors since 1939, which was the third year of Franklin Roosevelt’s second term in the White House. That year the Dow fell 2.9%.

The one time this pattern didn’t hold in the subsequent seven decades was during year three of Barack Obama’s second term in office, when the Dow fell 2.2%.

The question now: Will history repeat itself under President Biden?

There are very good reasons that it could.

First, as I wrote a few weeks ago, divided government is often great for stocks. And this year in particular – when too much government spending helped stoke runaway inflation – that’s even more the case.

A Republican-controlled House of Representatives will likely squash any new spending plans emanating from the White House.

Second, of course, is the fact that the inflation fever may just have broken.

According to consumer price data released last week, month-over-month and year-over-year inflation growth were both lower than expected in October.

That likely means that Jerome Powell and his colleagues at the Fed can soon slow or even pause their campaign of raising interest rates.

The futures market expects another half-percentage-point hike by the Fed next month and then perhaps a couple more quarter-point hikes early next year.

So investors may not have to fight the Fed much longer, with rate hikes trailing off just as the third year of Biden’s term begins.

Bottom line: If you have any faith in the presidential cycle concept I detailed above, then you’ll agree that right now is the time to get back into the market if you want to participate in that third-year rise.

High Inflation: Due to Corporate Greed… or Government...