This year was a crazy one for markets, with bonds and stocks both down about 15%.

If it stays this way through the end of this month, 2022 will be just the sixth time in the past 94 years that both have finished the year down by double digits.

Of course, it’s the energy sector.

That’s not too surprising, given how the Russian invasion of Ukraine upended energy markets this year – and sent many nations dependent on Russian oil and gas scrambling for other sources to keep the lights on.

But it’s still striking how much the energy sector outperformed all other sectors.

This chart tells the story… 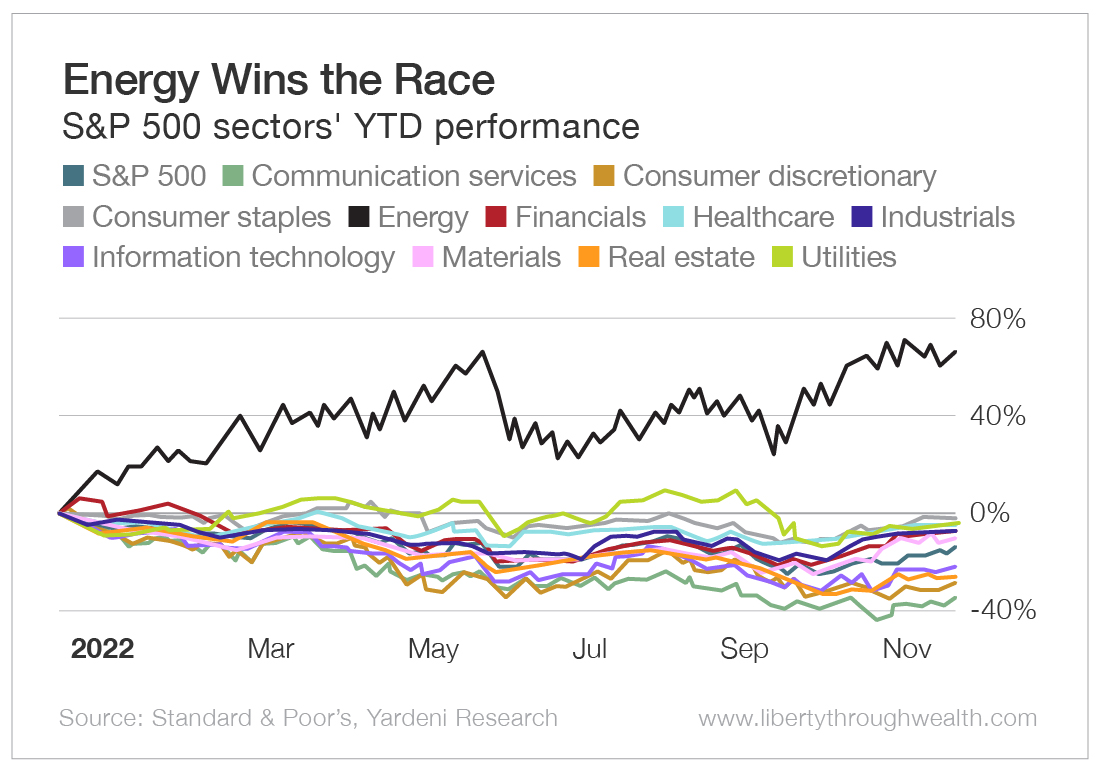 And it’s not just the S&P 500 (which tracks large cap stocks) either.

For investors, this raises two important questions: First, can energy’s bull run continue? And second, how do I profit from it?

That’s due primarily to the fact that global demand and prices of crude oil and natural gas are expected to remain near current levels through 2023, and perhaps beyond.

Most industry watchers expect U.S. oil production to increase next year because of demand. The U.S. Energy Information Administration (EIA) forecasts that U.S. crude production will increase by about 480,000 barrels per day (bpd) to 12.31 bpd next year, topping 2019’s record output.

The EIA also expects the prices of WTI crude, Brent crude and natural gas to remain near current prices – or go even higher.

Morgan Stanley agrees. Last month it significantly raised its forecasts for liquefied natural gas (LNG) for 2023 and 2024 due to an expected 25% to 50% increase in demand, much of that from European nations.

So how do investors play this?

Well, you could certainly invest in the entire energy sector through mutual funds and exchange-traded funds that track the industry broadly.

The iShares S&P 500 Energy Sector UCITS ETF (OTC: ISRHF) tracks the S&P 500 energy sector. It’s up about 67% year to date, consistent with the figures cited above.

Investors looking at energy stocks could also choose a narrower slice of the sector that is particularly hot right now.

Natural gas is appealing in that – unlike crude oil – it has both short-term and long-term growth drivers.

The short term is all about Vladimir Putin’s disastrous war in Ukraine.

That epic misadventure is not only driving demand for LNG but also dramatically shifting both demand and supply sources.

According to S&P Global Commodity Insights, Europe consumed 32% of all LNG imports this year (January 1 to October 31) compared with 21% in the same period last year.

And it’s getting that additional LNG from the U.S.

American exports of LNG to Europe doubled this year before the fourth quarter even began. 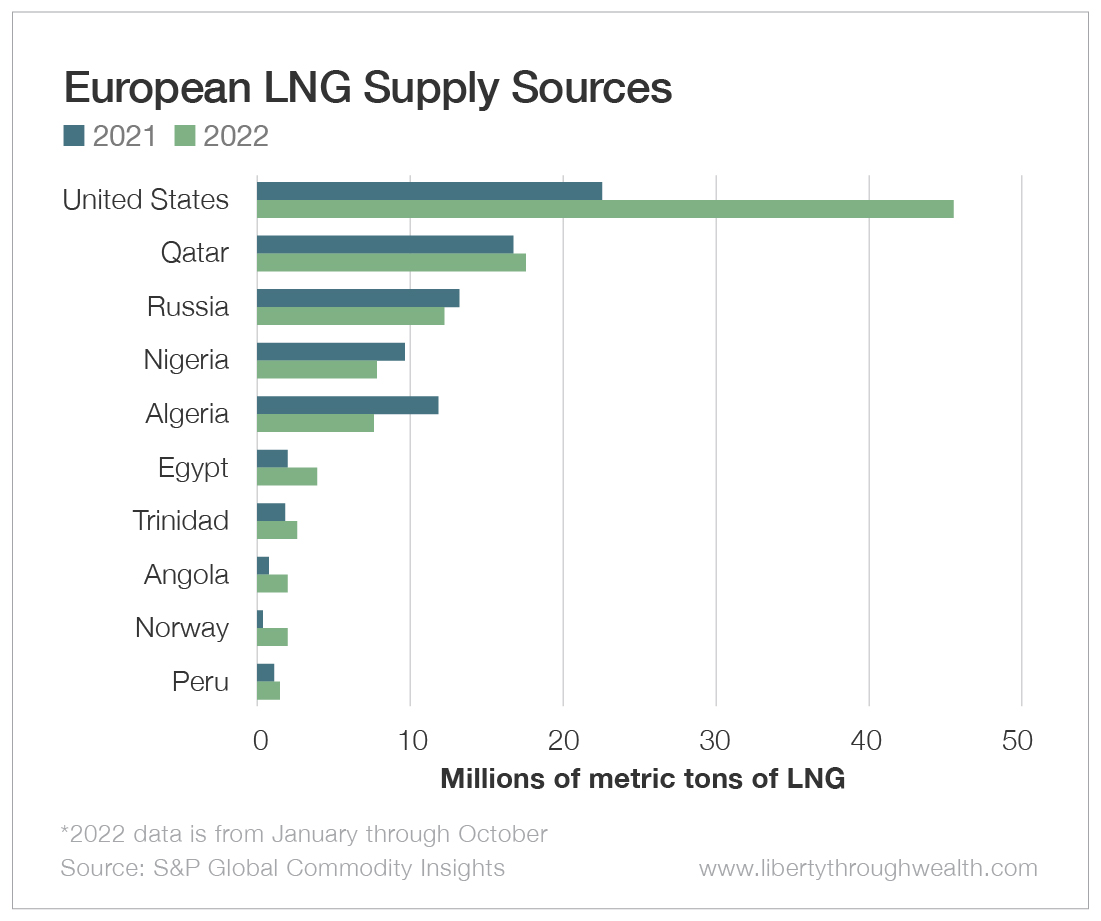 In the longer term, natural gas is seen as a transition fuel that can move us from very dirty oil and coal to (eventually) very clean energy sources like wind and solar.

But renewable energy sources are far too small to power the world today. If you include hydropower, they account for just around 30% of global electricity generation.

Natural gas – cleaner than oil and coal but not as clean as renewables – is becoming the bridge. Interestingly, Putin’s invasion of Ukraine is accelerating this trend.

Consequently, momentum has shifted from phasing out natural gas to reducing emissions from natural gas while cleaner alternatives are developed and deployed. Increases in natural gas investment are expected in 2023, including investments that reduce the greenhouse gas intensity of natural gas and related infrastructure.

I don’t know about you, but when I see an asset class that has both short-term and long-term drivers, I jump on board.

How to Protect Yourself Against Inflation

How Woke Ideology Undermines Our History… and the...

The Great Enemy of Investors